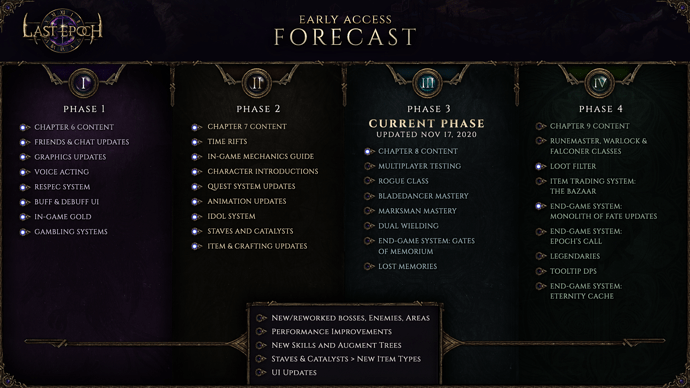 Click on the image to see a larger version.

30 Likes
Still no multiplayer?
Feedback after 400 hours
Skill dps tracking
Opinion and Ideas after 36h gameplay
1st impression
Is there level scaling in the game?
When Rogue?
Tab for in-depth minion statistics
Patch Preview: Beta 0.7.10
Visual Improvements Coming in Our Next Patch
Suggestions
Do you guys still believe game will be out by the end of this year?
Already bored
Is there a demo?
Is this game a Path of Exile knockoff, which itself is a reinvention of Diablo 2?
A Sneak Peek at Chapter 8
Is Rogue In Game?
When is the rogue character coming?
Character Introductions in Last Epoch
Release and online play!
Improvements suggestions
Is the game multiplayer yet?
Why not show the exat dmg of the skill?
QoL - Civilopedia
New player
Well everything ive said so far on the discord on record here on the forum xD
Has anyone told them about the Graphics?
Changes to Chapter 1
Patch Preview: Beta 0.7.6
Patch Preview: Beta 0.7.6
Next patch Pre Pre guess stuff?
Endgame Content in Last Epoch
Patch Preview: Beta 0.7.4
Flame Ward Announcement and Tree Preview
Upcoming Item Improvements
The Release of Patch 0.7.4 and What's Coming Next
Can't select Rouge
Answers to questions I see asked daily, feel free to ask any that aren't answered
What come's after monolith/arena
Overhauling Tooltips to Better Present Information
Approaching Phase 2: A Sneak Peek at the Mechanics Guide
Overhauling Tooltips to Better Present Information
Five Quality of Life Improvements Included in Patch 0.7.3
Patch Preview: Beta 0.7.3
Combined stats of skill after applying passives
Patch Preview: Beta 0.7.2
Some different questions
Damage Calculation
Show damage please
Skill damage changes when switch weapon not visible
Overall feedback on game
Damage stats for individual skills
Different color options for tier 5+ items (colorblind mod)
Black Hole interaction with Red Giant and Binary Star
Beta 0.8 Patch Notes
Warlock Availability
Confusion about Gear Progression
Loot Filters in Last Epoch
Why add multiplayer in when so many other things should take priority?
Optimize launch and shutdown please
Is the story complete?
Another Phase 4 Item Approaches: Tooltip DPS!
Loot Filter Improvements Coming This Week
Are there any plans to add skill specific stats sheet?
Patch Preview: Beta 0.7.9
Patch Preview: Beta 0.7.9
Need more information about skills
Sarno November 29, 2020, 11:46pm #2

Click on a question below to see its answer. We may add additional questions to this post over time for visibility if we see specific questions being asked frequently.

Thank you for the transparancy.

Would you say you are in Phase 1 now? Or in Phase 0, getting a few thigns out of the way before you start on Phase 1?

Patch 0.7.2 is due to release during the first half of next month and will be part of Phase 1.

Thank you for the speedy responce

Excited to dive back in as the updates start rolling out! Patiantly waiting for that Warlock class!

Glad to see, looking forward to it being incredible

Awww… gonna be quite a wait for multiplayer

Edit: also slightly concerned that bazaar would be implemented only in phase 4. But given that LE is a game that would be iteratively worked on post release, I suppose there is still room to revamp bazaar if there are strong views that the devs agree with?

Oh well! I’m still looking forward to all the other content that will be added on the way there! Good luck, team!

Yeah I wish Warlock was sooner.

Cool beans! Looking forward to it!

Thank you so much for the update! Its really great to see how you all plan to have the rest of early access unfold, and i can’t wait to play each phase

Awesome. But chapter 6 content, what about chapter 5? Looking at the 0.7 patch notes we should just be up to chapter 4 right now.

We’ve got a patch coming down the pipe pretty soon here too.

7 posts were merged into an existing topic: Trading! or: How I Learned to Stop Worrying and Love the Bazaar!

Awesome. But chapter 6 content, what about chapter 5? Looking at the 0.7 patch notes we should just be up to chapter 4 right now.

So, as noted in those patch notes, in addition to Chapter 3 and Chapter 4 content, Patch 0.7 also introduced an additional chapter which is played immediately after character creation. Due to “Chapter 1” having previously been available, at times we’ve considered the new start to the game a “Chapter 0” of sorts - unfortunately this has resulted in inconsistent phrasing.

It’s awkward in that, for new players, logically the first chapter would be Chapter 1. Though for people who had played prior to the addition of the prologue chapter, there was already a chapter referred to as “Chapter 1”. Going forward we’ll be more consistently referring to the first chapter as Chapter 1, and renaming the subsequent chapters accordingly.

Ah I thought it might be because of the prologue, thanks for the response.

Why not just call it Prologue?

I’ve added the first couple of additional questions to our FAQ post above.

I’ve also moved some posts about trading to the Developer Blog. While it’s good to see feedback on such an important topic, the posts were beginning to derail the discussion about our roadmap posted above. Additionally, them being placed here would make it less likely that they would be found again when we discuss trading at future design meetings.

I’m excited to see what the game looks like with next major patch(graphics). Will it be a significant change or is it more of an optimization of the graphics? Either way pretty excited! Thanks, ng.