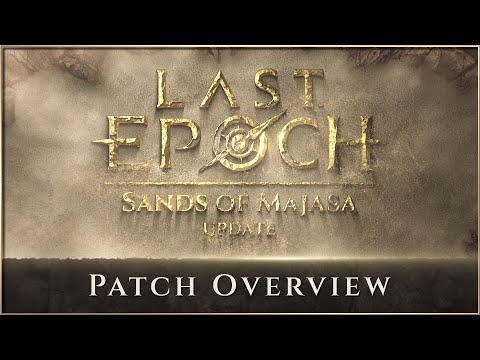 To stop the Void from ensuring the dark fate of the world, you must destroy the Immortal Emperor, who is believed to be the one who unleashed it. This quest takes you to the Divine Era to search for The Lance of Heorot, an ancient weapon Heorot once wielded against his son Morditas.

To renew the power once held by the lance you must obtain the Blessing of the Gods. You have agreed to help your new allies Yulia and Greal defeat the sun god, Rahyeh. In exchange, you will receive the Lance of Heorot for your use against the Immortal Emperor afterward. Your journey so far has earned you the blessings of Heorot and Lagon, leaving Majasa’s as the final blessing.

This update includes Chapter 9 of Last Epoch’s story, where you will venture through the desert to the city of Maj’elka on your quest to meet with the serpent Goddess, Majasa. You’ll need to gain her blessing to empower the Lance of Heorot to have even a chance to stop Rahyeh from continuing his divine conquest.

Returning players: At the End of Time you will receive a quest to return to Thetima and speak with Yulia to proceed onwards.

The empowered versions of all non-shard drop rate blessings have had their max roll buffed by around 20%.

Going into 0.8.3, the Necromancer had several issues mostly centering around its class specific skills, Dread Shade, Summon Wraith, and Assemble Abomination. All of these skills have received changes to their base functionality and moderate changes to their trees. These are intended to curtail overpowered or problematic abilities, provide more opportunities for permanent minion playstyles, and add more synergy with the newest Acolyte minion, Volatile Zombie.

The Werebear Form rework and Druid transform system overhaul were originally scheduled for 0.8.3, but are now coming in 0.8.4. These changes for 0.8.3 are minor changes mostly intended to reign in the power of Bhuladar’s Wrath Werebear and the speed of Werebear builds in general as they were much too powerful in 0.8.2 to leave untouched until the rework.

Until 0.8.3 the Void Knight’s Void Spells gained increased damage from attunement and had the same base damage to added damage scaling ratio as other spells. This often resulted in them having better synergy with Paladins and Forge Guards that used other attunement scaling skills than they did with Void Knight and made their damage very dependent on the large amount of adaptive spell damage granted by caster weapons such as sceptres and staves. This combined meant that they couldn’t really be balanced to be good options for melee Void Knights.

As a result, their base damage has been doubled and their increased damage from Attunement has been swapped for added spell void damage from Vitality.

Traditionally incorporating a heavy melee attack, such as Forge Strike or Judgement into a melee build that also uses a light generator melee attack such as Vengeance or Rive has felt unrewarding. The heavy melee attacks didn’t deal enough damage or have clear enough windows to be used in.

We’re changing them across the board to be cooldown gated by default, rather than mana gated, and deal more damage. We hope that this will help them slot more neatly into melee Sentinel builds. However all their trees have received moderate changes and include options for removing their cooldown and swapping them back to being mana gated instead if you prefer that play style or it makes more sense for your build.

- Procced by Forge Strike and various nodes on other skill trees

15 Likes
[SPOILER] Community List of all Uniques found in 0.8.3!
What is the point of the Gambler now?
Bad boss design
8.3 Lightning Swipe Aspect Of The Shark Stacking Beastmaster
Aluxaeterna September 2, 2021, 6:40pm #3

Values listed are relative to normal enemies of the same enemy type.

You guys might want to get some poison resist.

The Sheer number of numerical changes this patch is astronomical!
This will take some time and testing!

RIP werebear charging EQ. No surprise as it was bonkers broken.

As a result, their base damage has been doubled and their increased damage from Attunement has been swapped for added spell void damage from Vitality.

Vitality stacking is going to become super meta with the change for void scaling.

What a time to be alive man!
What a great and huge patch!
Thanks EHG!

I think i entered this forum every 20 minutes today since morning time to see if thing thing came out. And my internet is so slow it takes like 5 minutes to open forum page this is how much i was looking forward to it. Now im gonna read it in peace. Thank u guys for your hard work. Looking so much forward to play it in 3 days when i will be able to
Edited:tqrget farming of uniquea is nowhere near as bad as i thought it would be, it actualy gives flavour to timelines

There’s so much to unpack here. The nerfs. The buffs. The lightning paladin being a thing. And also:

A step in the right direction, I’ll play around with the old boy and see how much better it feels. Probably isn’t going to make it all of a sudden viable by any stretch, but that gives me hope that it’ll retain it’s unique ideas in the Primalist rework coming up.

Awesome! I am excited for the new patch!
Though, I don’t see a lot on cold mechanic so I guess I will have to stop playing cold toons til further update. There are also a few questionable changes that limit build choice, but we will see when patch hits.
Excited for the new potion affix, now we can recover from stun. reactively! Time to roll a first proper Sentinel

Seriously those changes are aewsome and Chapter 9 looks so so much better graphicwise. Cant wait to play it tomorrow.

INCREDIBLE stuff! Also you guys think you’re cute turning paladin into Solaire and not thinking we’d notice when you make one of the nodes literally Sanctuary Guardian? Who is the Dark Souls lover on the dev team, eh?