Going into 0.8.3, the Necromancer has several issues mostly centering around its class specific skills, Dread Shade, Summon Wraith, and Assemble Abomination. All of these skills are receiving changes to their base functionality and moderate changes to their trees. These are intended to curtail overpowered or problematic abilities, provide more opportunities for permanent minion playstyles, and add more synergy with the newest Acolyte minion, Volatile Zombie.

There are specific issues that we're solving for each skill, but first we want to address a more systematic problem that disappoints a lot of Necromancer players. That is the fact that all the necromancer specific skills are either temporary minions or Dread Shade, which is not only a temporary buffs that has to be repeatedly recast to maintain, but also drains the minion it's attached to, effectively making it temporary.

One of our goals with the Necromancer was to allow for more active summoner playstyles, and we still maintain that as a goal, but a lot of people prefer the more laidback playstyle where they just summon their minions and then relax. Necromancer currently doesn’t really offer anything to this playstyle beyond the skills available to all Acolyte masteries. To address this we’re adding options in the tree of all three Necromancer specific skills to allow them to become permanent, or in the case of Dread Shade, require far less frequent reapplication and no longer drain the minion it’s attached to.

Summon Wraith has always been a difficult skill for us to balance. Combined with the various sources of additional Wraiths across other skill and passive trees you could end up with hundreds of wraiths, which would push a lot of mechanics over the edge and cause performance issues, especially in multiplayer. Because of this we’ve made the decision to add a hard limit to the number of wraiths, greatly increase their damage, and change the minions summoned by a lot of these incidental wraith sources.

Another issue that has affected wraiths for a long time is confusion over what counts as a wraith and what scales with the summon wraith tree. Previously there were things outside of the tree that were called "wraiths", but didn't scale with it. Sometimes these even had the same name as types of wraith that could be summoned via the summon wraith tree and did scale with it.

On a related note we have fixed the bug where putrid wraiths and flame wraiths decayed much more slowly than regular summoned wraiths.

The loss of Blood Wraiths in the wraith tree does not mean a loss of bleed synergy. Serrated Scythes has been buffed, and there is a new node that increases the effectiveness and duration of bleed applied by wraiths.

In 0.8.3 we want to reduce its power overall and also make it more situational so that it isn’t a must have skill for every Necromancer. Not everyone playing a minion build enjoys repeatedly applying temporary buffs, and it means we have to balance all the other minion skills around it. Because of that its base functionality has been changed to grant +10 necrotic damage to spells and attacks and 50% increased necrotic damage. In most cases this is much less powerful than the current 25% more damage buff it currently provides, which is multiplicative with all other modifiers.

Its tree has received several changes in addition to the new node shown above. Many of the damage and attack/cast speed related nodes in Dread Shade have been reduced in power, and the Martyrdom node now grants armor based on Vitality rather than Intelligence. Additionally the very powerful taunt from the Egoism and Deadlock nodes has been changed. The taunt from Deadlock now only lasts 4 seconds, and Egoism adds an 18 second cooldown, so the uptime on the taunt is now much more limited. This is not an isolated change and other sources of taunt in Acolyte and other classes have similarly been addressed for 0.8.3.

However the changes aren’t all nerfs. The Doom Brand aspect of the tree has been buffed, connections have been altered, and there are a few more new nodes.

On a more positive note, Assemble Abomination is receiving changes that should improve quality of life and make it feel less clunky to build a powerful minion with it. There has been a lot of feedback that the nodes on the tree to increase the speed of absorption felt necessary to make the skill feel good to use, but that it was hard to justify taking them when they meant that the abomination would be so much less powerful, due to missing out on nodes that increased its power. In response we’re rolling most of the effects of these nodes into the base skill and removing them from the tree.

One aspect of the abomination that has been too powerful in the past is the node that increased its threat generated. Both this node and the similar one on bone golem have had their values reduced, though the reflect on the abomination node has been increased slightly to compensate.

The abomination tree has also been shifted around a bit with different connections and power shifted to different nodes. In addition to this two new nodes have been added. One was shown above and the other gives it a new skill when it absorbs a volatile zombie. 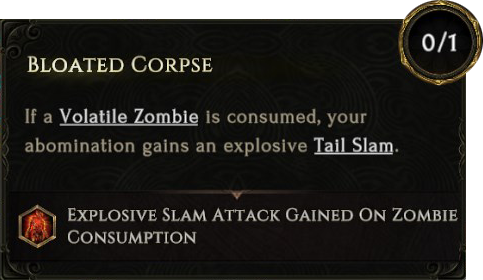 In general minions have been more powerful to level with than use in end game, and the change to Dread Shade will probably exacerbate this, so we’ve made a couple of changes, one very specific, and one very general.

The specific change is that the Tyrant’s Legion node on the Necromancer passive tree is being changed.

Summoned Skeletons in particular tend to drop off late game, and granting them a multiplicative damage bonus via penetration will hopefully give summon skeleton oriented necromancer builds a way to keep up. This has less of an effect on skeleton archers using fire arrow or ice arrow, but these are already more powerful than other types of skeleton.

The more generic change we're making to minion scaling is to minion power. Minion power is a mechanic we use to make minions stay more relevant in endgame. Each 1% minion power grants them 1% more damage and 1% less damage taken, both effects are multiplicative with other modifiers.

does the Minion Power scaling stack with the less dmg taken in general for minions? (Minions take 50% less dmg from all sources) Im assuming it will be replacing that?

It does not. That is a separate modifier that applies at all levels. This is an update to the existing minion power scaling, that currently scales up to 40% less damage taken at level 100, and now scales up to 45%.

I am a sad panda, looks like my 60ish minion necro build (49 wraiths) is going bye bye.

Difficult for me to see what this will do to my two Necros.
Very interesting moves, though! I’m not sure I personaly like it, but that will be a very good patch for the Necromancer.

So will BM companions power be increased as well or do they operate different for some reason?

It’s the same on all classes.

Loving the changes so far, even though a bit confused about the whole necro->poison conversion on dread shade. Necro doesnt have any poison minions aside from putrid wraiths and uhh vomiting zombies? Also no poison bonuses on the tree so not sure who would use it. Also loving that 3 skele limit on Abomination node: archmage skele might see the light of day finally. Cant help but feel that increasing that limit to 5 would synergize even better with Archmage + Dread Phalanx. Or maybe changing Dread Phalanx node to give more boosts but reduce the number of skeletons to 2? Just throwing ideas around.

It converts to poison chance

It says right there: “Increased necrotic damage-> Increased poison damage”… In other words, it now increases poison dmg by 50% and all added necrotic dmg becomes increased poison chance… Wierd node considering theres nothing else that would scale poison dmg but i guess you can stack as many minions as possible to get as many poison stacks as possible but idk if that would be a viable build, especially since Lich does much better job at stacking poisons with all the bonuses to poison potency and duration you can get on her tree.

You want to increase poison damage?
→ Here you go:

Perhaps i should’ve been more specific as well: im aware that there are ways to make your minions apply poison but unlike Lich, Necro doesnt have any ways to increase duration, penetration or poison potency, so while your minions can apply poison, it will be very “basic” poison and i dont if that is strong enough for end-game build. This new dreadshade node does have 50% increased poison dmg but idk if “increased” is good enough. If that was “more”… But then that might be too strong? Will have to wait and see i suppose.

you do realise, that all listed is chance to poison, not poison dmg, right?