In the Imperial Era, the once majestic chimeras of the mountains and deserts are nearly extinct, due in part to the Immortal Chimeras. At first look, the Immortal Chimeras appear to be chimera that have been risen from the dead, though upon closer inspection one can see that the chimera’s body has in truth become host to a parasitic snake. Some say that these snakes are the cursed children of the dead goddess Majasa, though others theorize that they are merely tainted by the necromantic waste that has seeped into the land during the Immortal Empire’s reign. Either way, the way they animate the dead bodies of their hosts is an unsettling sight to behold.

The Chimera have a long history in our team. Years ago we had an idea for a monster we called the Immortal Chimera – a skeletal amalgamate monster with heads from different animals. We created concept art and even a prototype model but haven’t had a chance to implement this creature into the game… until now. 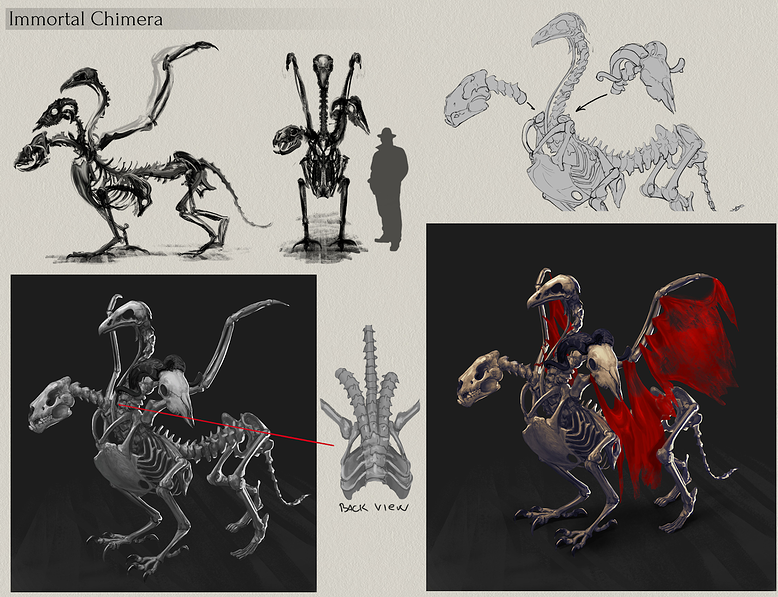 We liked the idea but while it was a fantastic design, there were a couple of things we wanted to revisit. The main goal was to get away from the skeletal theme because while it looked great as a concept, in practice, the skeletal form ended up looking flimsy and unimpressive while also bringing on a large performance hit due to the amount of negative space (rib cages, bones, etc). The Chimera needed a more solid and imposing body. We started by searching for interesting references, which in the end influenced our final design. 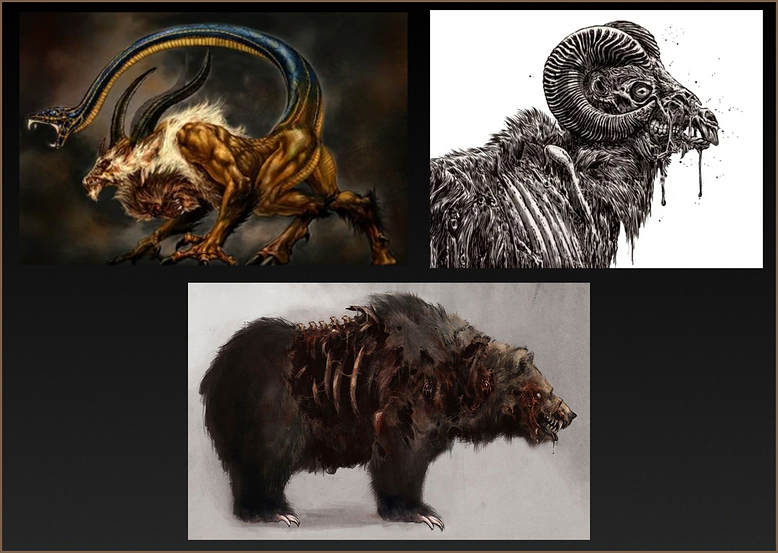 We knew we wanted Chimera to be this undead animal monster but also wanted it to tie into the lore of Eterra - undead animals don’t appear out of thin air. The idea for Chimera is that these once magnificent creatures become the host of a necrotic parasite and their bodies have decayed. To get the best reference for our undead version, we also created the concept of a living Chimera. 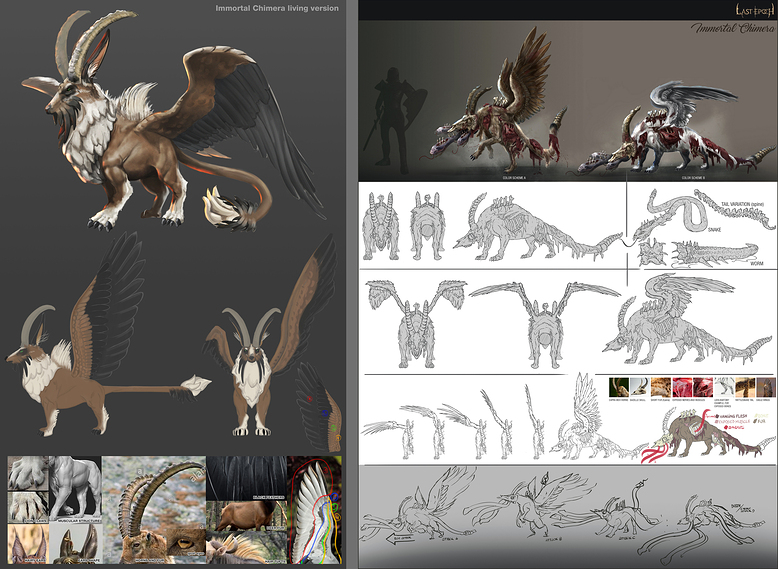 Once we were happy with the concept, the next step was to create a high poly 3D sculpt and model it with a low polycount to be used in the game. To finish the model, textures and materials were created to bring the Chimera to life. 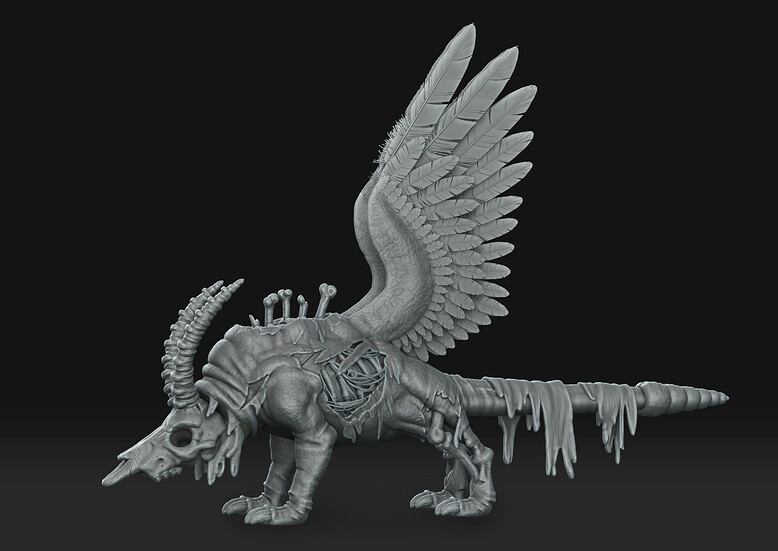 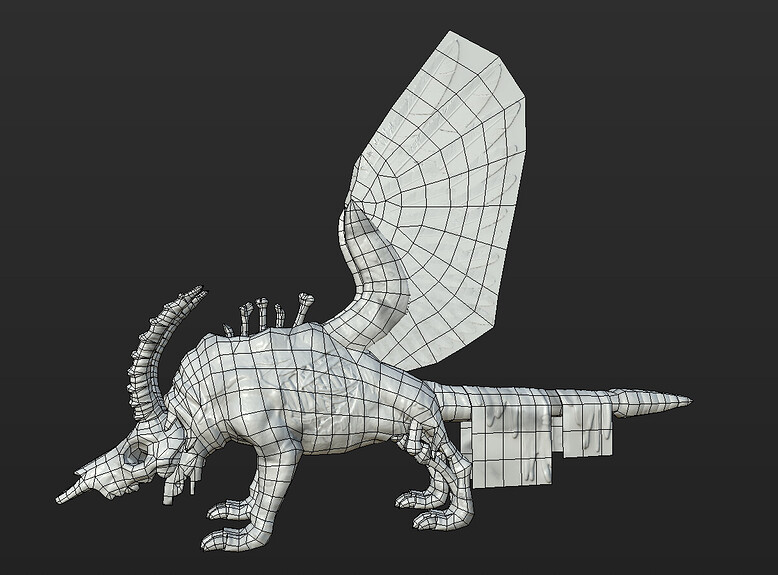 After we saw the concept art of the snake inside the beast, we almost instantly had the idea to make the snake crawl out of the body after killing the Chimera and become its own enemy. This proved to be a bit of a challenge as we hadn’t done anything like this before. Without getting too technical, it required a lot of small number adjustments to get the transform values and timing just right. We were also able to use some blood VFX to mask the snake transitioning from being a part of the beast model to being its own enemy.

The transformation from one entity to another.

The most fun part about designing sounds for Immortal Chimera was the concept of a snake controlling this beast from the inside. The design approach was based very much around reflecting a tormented creature teamed up with a slippery serpent. Many gooey, crunchy, hissy sounds were used, especially for the Immortal Chimera’s death sequence.

The snake coming out of the mouth on death is probably the most badass thing Ive seen in this genre.

A perfect example of why “its ready when its ready” pays off.

Very impressive, even if the rotation of the model on itself ruin a bit the global appreciation of the beast

That’s so friggin cool. The snake parasite controlling it in particular.
Maybe the same idea could be applied to the Necro and Abomination, us controlling the Abomination from inside it! JK

That is so BA! Awesome job.

Not gonna lie, that snake coming out of mouth is just way too over the top. Its too much. It looks straight up bad.

This is extremely cool!

Just curious, in what way is it to much? This is a very unique monster to encounter. Uniqueness keeps it interesting!

in what way is it to much?

(s)he has to be joking…right? It looks amazing and has a unique gruesome vibe I am digging.
FYI - don’t sell this in China.

I really have to say that this thing looks awesome especialoy the animation of the snake coming out of the mouth and slowly going back in
And then the transformation, awesome!

your imagination has no limits and i say thanks for that! amazing!

This looks insane, I love it.

The animation where the snake attacks from the Chimera’s body looks amazing.

Oh damn that’s so fucking cool, had the biggest grin when I saw it in action

It looks really cool (well no, ew! But cool.) and dangerous, which was my main complaint about their previous model, they were dangerous but looked frail.

Any chance of sighting those interesting beasts alive before the imperial era?