Our most recent release, The Sands of Majasa Update, raised the quality bar for our patch releases and is a good example of what our growing team is able to accomplish. We welcomed thousands of new Travelers to our community, and with your help we hope to continue building a home for all Last Epoch players for years to come.

To our outstanding community members who have been working hard to keep in-game chat an inclusive and welcoming experience for all of our new Travelers - thank you! Due to our quickly expanding community, we acknowledge the need for a major update to our in-game chat services to provide you with a fun and functional experience. We’ll have more to share on our plans for updating chat in the near future.

State of the Multiplayer

We know players are excited about multiplayer in Last Epoch and we can’t wait to play with all of you, however, there is still work to be done before we can open the floodgates. We feel it is important to remain transparent about our progress, which is why we publish a monthly multiplayer status report. Last week, we released Multiplayer Progress Update - September 2021. To learn more, check also our Multiplayer FAQ.

A few months back we talked about changes to our roadmap format. The goal of this change is to better inform players about what’s coming to the game next. And in the spirit of these changes, today we’d like to share our forecast for 0.8.4. 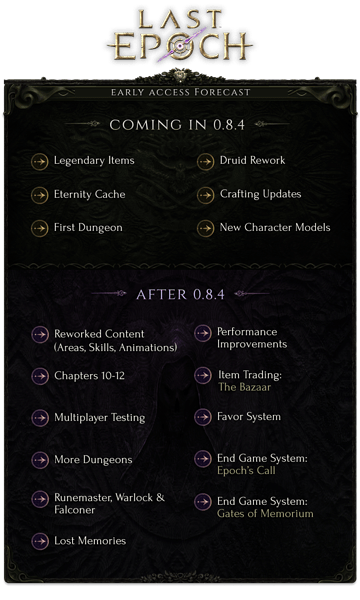 As you can see in the updated forecast, the next patch will bring a lot of interesting content and long-awaited changes. Let’s take a closer look at what you can look forward to in patch 0.8.4, coming later this year.

Legendary items and the Eternity cache are a major feature of 0.8.4. Since announcing these features all the way back in 2018 we’ve iterated on their design a lot internally to ensure that they enhance Last Epoch’s itemization by providing great end-game chase and make item drops more exciting. . We’re not ready to announce exactly how Legendary items work or how the Eternity Cache factors into their acquisition, but hold onto your exalted items that have good affixes. You’ll want them.

Earlier this year we talked about plans to improve the Druid mastery and especially the transformation skills and mechanics . Here are some changes you can expect to see in this next update:

We will share more about these changes in the upcoming weeks, but for now, enjoy this sneak peek of our reworked Werebear gameplay.

Introduction of the first Dungeon

Patch 0.8.4 will bring our first dungeon into the game. The dungeon system is another major system in Last Epoch that we will build upon over time adding more dungeons and dungeon mechanics in later updates. We will have more information for you closer to the patch release, but for now, we can reveal that it will utilize our first iteration of map layout randomization and will offer different gameplay compared to Monolith maps.

Crafting in Last Epoch is one of our fan-favorite systems so when making updates to it, we want to be careful not to change what players like about it. However, we feel there are some issues with the current system. For example, the random factor and fracturing items can lead to “feel bad” and frustrating moments.

In 0.8.4, crafting will get some major changes. It will still be deterministic, and involve using shards to augment or add specific modifiers on the item, and we also still keep an element of randomization. However, that randomization will no longer come in the form of an item suddenly fracturing.

We are improving Last Epoch’s visuals every patch and 0.8.4 will be no different. For example, In the Sands of Majasa Update, the Primalist got a new model and we will be adding new models for the rest of our characters in this upcoming patch. New models will support facial animations which will be important for the future improvements of the game. We are also hard at work on creating new and updated armor sets as we’re nearing completion brand new models on all of our in-game weapons and offhands.

Many visual effects, that don’t represent the current quality of Last Epoch visuals are being reworked. Some initial targets beyond the Druid rework include Flame Reave, Serpent Strike, Wandering Spirits, Frenzy, Haste, and many on-hit visuals.

We also are constantly looking to update older enemies. Some of the void enemies encountered early in the game are some of the oldest and are being brought up to our modern standards.

Another enemy that we will be replacing is all forms of Spriggans.

Last Epoch’s character creation and selection screen is also showing its age as many have pointed out. We understand that first impressions are very important and we’re reworking these screens entirely to include new visuals, better representation of characters, and updated UI.

What else we are working on beyond 0.8.4

One of our long-term goals is to continue to improve and rework campaign chapters to bring the quality of the campaign up to our new standards. We are adding more voice acting, making dialogue and narrative adjustments to help engage players with the story, and working on lore collectibles which will give players a way to know the deeper stories of Eterra.

We also have targets that will make combat in Last Epoch feel more impactful and satisfying. It is absolutely crucial to get the feel of the combat right, and we are exploring many improvements we can make , including updating hit visual effects, exploring directional hit effects, improving hit sounds across the board, and more.

We’ll be sharing more information and teasers on the upcoming patch through our social media channels so make sure to follow along:

Thank you all for the amazing support and opportunities you’ve provided to Eleventh Hour Games. We’re working hard to make Last Epoch a game that you want to come back to for years to come.

you did it… im hyped as fck…

Oh my god. Dungeons and legendaries. Not sure I can avoid binge playing before the release… (1.0)

However, that randomization will no longer come in the form of an item suddenly fracturing.

Speculating this means you will have to roll low a few times for an item to fracture.

My body is ready.

This is pretty huge… now to contain the hype. Can’t wait to see the teasers when they come

So much hype the new transformations look amazing!!!

My god you’ve done it…you’ve hyped me two months in advance with basically everything I was hoping to get this patch. <3 for EHG!

These news are music to my ears

excited as hell. This is gonna be the best arpg ever, without any doubt

I’m so absolutely on fire!

Lot of nice improvements coming to the game.
But the one I’m most excited for is the rework of the crafting as the minor fracture feels really bad (way too punishing) and new tiers made crafting less powerful (it no longer gives the best items, loot gives the best items and crafting “only” improves them).
Crafting is to me the one thing that needs a rework the most badly. (Then attributes.)

Glad to see that ‘older’ content is getting updated, especially the character models

Also I really, really, Really! appreciate these big updates on development. Keep up the good work