Hello travelers, and welcome again to the monthly multiplayer update!

Through the last month we were hard at work delivering our Sands of Majasa update, which of course takes some of our attention to ensure we can deliver a high quality release to everybody. We were humbled to see more and more engagement with new players every day, and the reality of what this means for the scale of our multiplayer release is not lost on us.

I’d like to update everybody on our goals from the August Update, as well as share some information about some decisions we’ve made for group Arena play. I am also going to discuss some of the learnings we have made about the scale we need to get to in order to ensure a high quality multiplayer release.

Onwards to the updates!

1. Convert the Idol System to be 100% server authoritative

This is complete and works well online. We will have ongoing work to fix a number of the Idol affixes, specifically the ones that have very unique custom properties such as casting other abilities. It’s more important for us to focus on the backend and technical portions of multiplayer at the moment, so we are happy with the progress we have made here until we get to CT and MP Alpha testing.

I am very happy to say we now have this. We can now actively see the performance of all of our game servers at any given time, and we have a permanent history of them as well. It’s possible for us to find outliers, good and bad performance, and major outages using our own hand build diagnostics. This is crucial for us to be able to work quickly if there are issues when we go live. If you are having a bad time when Last Epoch multiplayer goes live, we’re going to know where to look right away.

We performed some preliminary investigations here, and discovered that it will take some refactoring of our existing gamepad code in order to make it easier to co-develop it with multiplayer. We know what to change and have a plan of how to do it, and anticipate no issues making it all work. We are going to return to this project once we’re done focusing on our backend and scaling.

4. More testing and optimization of the Arena experience for multiple players in a party, and advance supporting systems noted above

After playtesting, we have decided that Multiplayer Arena runs will use a group voting system in order to allow players to vote on whether to continue to more challenging Waves. 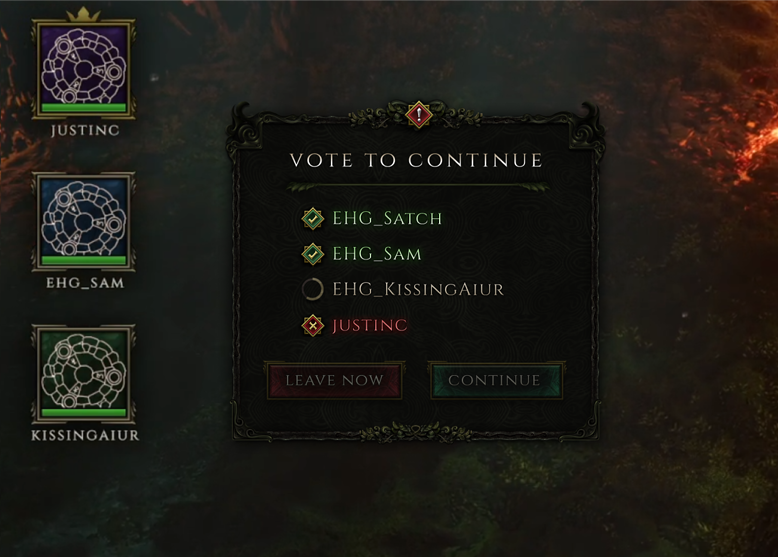 Why use a voting system?

During playtests, we felt that having an entire run end due to one player having to leave the party unexpectedly felt too punishing.

Using a majority vote system to progress in the Arena allows the party some level of flexibility, which is particularly beneficial when attempting longer Arena runs.

We will continue to assess the multiplayer Arena experience and make any further changes required before we release it all to you.

5. Start preparing to add Multiplayer to the Community Tester Program

I probably should have been anticipating the response here, as I caused some chaos for our support team by having the community reach out through our support network

We had an overwhelming response of people interested in involving themselves in our Community Testing program, no doubt aided by the fact that it might involve early Multiplayer Testing.

I want you to know that we’ve received everybody’s responses and we’ll eventually be selecting new candidates as we get ready to test our game at scale - if you’ve already applied we will eventually get to you.

The first refers to all our game content and gameplay “netcode”; setting up all the game content online, compensating for gameplay lag - essentially making sure the game is functional and feels as good as our singleplayer game does.

Last Epoch as a platform involves everything else it takes to bring a game online: How do we allocate you servers? What is our matchmaking code? How does our character storage database work? Can our login system handle hundreds of thousands of requests at the same time? Do we need a queue system? Do we have metric systems in place to monitor the health of all this?

We have been performing relentless testing of our multiplayer platform for Last Epoch to ensure it can scale up to handle many players, and do so in a stable manner. Between our continued development of our own skills as Live Ops developers, as well as observations about modern ARPG releases, we have learned a lot about where the real risks of a live release are (hint: the servers are the easiest part).

As a result of all this testing and learning, we have come to discover that some of our backend services may not hold up well to scale as well as we would have liked them to. We are very happy to make these kind of observations now before we release to a lot of unhappy people unable to play our game, but it still means we need to go back and make some changes.

So what does this mean? Firstly, this does not stop us working on Last Epoch multiplayer gameplay content - we’re still readily adding and testing our singleplayer content and preparing it for group play, making sure it feels great and performs well. It does mean we are taking a step back on some of our backend systems to make them even better, such as the way we allocate servers, or our chat system.

While these discoveries can often feel like a setback, the reality is that we are collectively quite relieved to now have the confidence to build out our own platform and own it. We are also confident that we’ll be able to quickly fix any problems that might happen when we go live. We now have a clear vision for Last Epoch as a long-term live platform, and I’d like to share more of my philosophies on that next month.

What are our goals for October?

We will be focused on making the changes mentioned above for the sake of our stability and scalability. We’re actually well underway in most avenues here, and we hope to be playtesting Last Epoch multiplayer with our new changes in the next coming weeks. Until then, we’re still actively adding and changing game content to account for group play.

Rather than provide a list of bullet points this month, I plan on discussing the core pillars around what matters to us for a successful Multiplayer release, and what you as a player should expect from us when we go live. I will also update you on the progress we make strengthening our backend to prepare for release.

Thank you so much for all the support, and I am really excited to show you all what we have cooked up for next month.

During playtests, we felt that having an entire run end due to one player having to leave the party unexpectedly felt too punishing.

The vote is a good thing but I’m not sure how the vote would help for the scenario depicted here.
If someone have to leave unexpectedly and the majority wantd to stay, the one who need to leave will still need to leave.
Making sure that someone disconnecting wont stop the arena for the others would help much more here.

Fully agree with this, to use Warframe as a comparison, in some game modes you can “vote” to leave after 5 waves but it’s everyone’s individual choice and if players leave difficulty scales.

They also have some modes which are endless without a vote, but you can go to the exit to start a 1 minute countdown for everyone that wants to leave, to leave at the same time. This used to need at least 2 (out of 3 or 4) players to even start the countdown.

This lead to situations where people either had to close their game to leave and miss out on most of their rewards or were forced to stay, sometimes leading to situations of players simply letting themselves get killed or hide in areas enemies couldn’t reach to go AFK.

Players should never be forced to stay in a game they don’t want to be in, this doesn’t benefit anyone.

AWSOME Looking forward to this, you guys are doing an amazing job.

Hello everyone, I am using a translator, I am sorry if something in which I write cannot be understood correctly, my questions are the following:

From a software development point of view, your team is truly doing it how it should be done. Build the core components well with scalability at the forefront of design. Start off small and scale up with stress testing and metrics to help identify issues that arise.

Really well done you all! Bound to be growing pains but I’m sure the community appreciates you doing things right (as well as yourselves)

Cool! But how would the voting system tiebreak even sized parties? Also, do we know how we would recruit and form a party yet?

What about the masters of the classes will launch it before multiplayer?

The missing masteries will be released at some point, more or less independent of MP release.

I absolutely agree with you