We’re eager to share some exciting changes to the systems you’ve become familiar with – read on to dig into everything you need to know about preparing yourself to take on a barrage of new challenges. 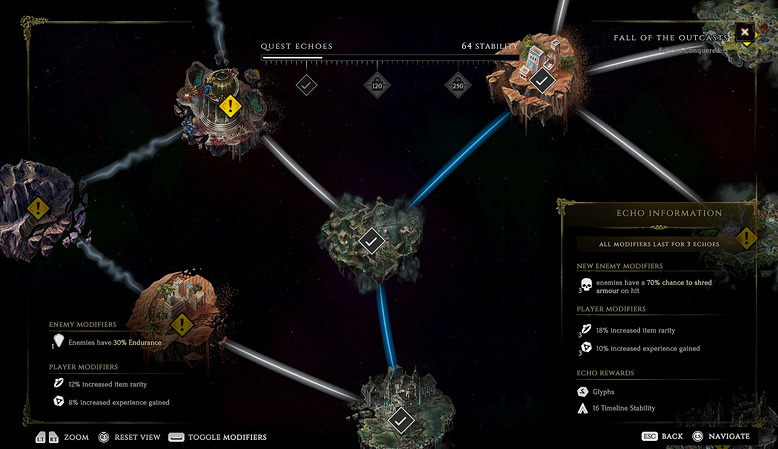 Gone are the days of linear, binary decision making. The Monolith now benefits from:

Get the full details on the all-new echo web experience on our
Monolith Overhaul Developer Blog.

As you journey through the Monolith, you’ll soon come face-to-face with the Shade of Orobyss, an unpredictable nemesis whose appearance heralds the destruction of an entire Timeline. Each encounter will vary greatly as this unique boss descends in multiple forms with 30 different abilities!

Patch 0.8.2 also presents a complete UI refresh. We are bringing new visuals and functions to every panel in the game. For example, take a look at the new world map and improved quest tracking.

You can also see updates in the crafting and character inventory windows. These windows, along with many others, have been reformatted to better display key information. 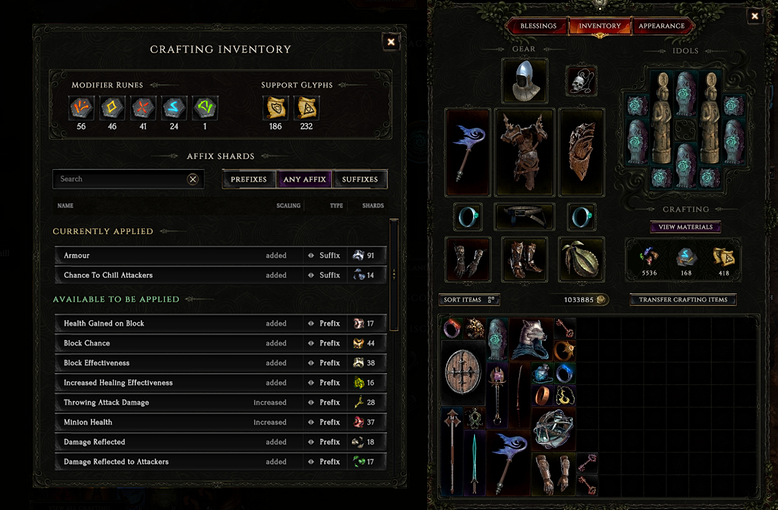 These examples only scratch the surface of the complete UI refresh! More to come on this in the near future.

The Primalist can now call upon Storm Crows whose default ability is to cast lightning damage-dealing spells from a distance.

The Acolyte can now raise Volatile Zombies who trudge towards the nearest enemy. When they reach an enemy or die, they explode dealing physical and fire damage to all nearby enemies.

You requested them so here they are, moveable stash tabs!

Thank you for your continued feedback regarding minions. We’re excited to be making a number of improvements to minions in this patch, including;

Fear not, the difficulties your minions have attacking the god of storms are la-gone.

As always, we greatly appreciate the community for the continued support and engagement, we would not be here without you!

EHG is amazing! Thank you for this wonderful game that only gets better <3

Aaand now i have something to wait for. Amazing job EHG!

I love it! Keep it up guys, i bet you can beet PoE and D4 after release!

… not even a dad joke, it’s a grand dad joke

It’s a lot of stuff, and it’s awesome.

only playing for 4 days but having a blast and almost anything i thought about that could be better is already deploying or in the making.

Happy to see a Studio that is listening for feedback like you do.

this looks amazing!!! i only got this game a few days ago and already fallen in love (love dungeon crawlers and hack n slash games like this) and i just cant wait to see where this game goes. really wanna be able to access multiplayer as well as the last 3 classes

Multiplayer is going to be on their servers so you won’t be able to cheat.

Every single word in this preview is absolutely amazing. I cant begin to describe how happy I am for… Mono changes, New bosses, Better minion AI (You will need to nerf zeckar after this, he will be too high on arena, 5k inc), Stash tab, everything looking crisp.

I really wish you guys had a MTX shop because I would be dropping money right now.

ays, we greatly appreciate the community for the continued support and engagement, we would not be here without you!

All this seems really amazing, keep up the great work!

Any balancing with this patch?