Today marks day three of our Druid Development Week, so stay tuned in the coming days to catch even more great news (full schedule below)! Today, we will be focusing on the Druid’s most adaptive transformation - the Spriggan.

The design goal of the new Spriggan form is to connect our players to the 'magical spellcaster rooted in nature' type of fantasy. This involved committing to a couple thematic design goals:

The visuals for our current Spriggan form were a bit outdated and the abilities felt rather clunky and difficult to use. All around, he needed of a lot of love. Here is some of our early concept art for the model redesign: 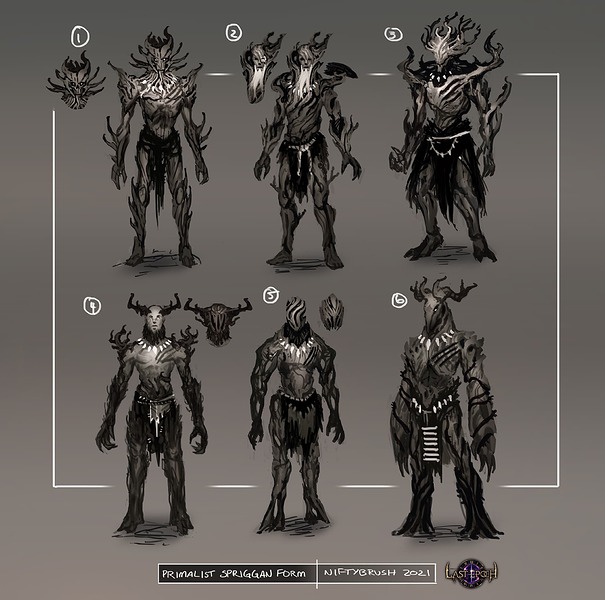 Once we decided upon the concept art and the details within, we set forth to create a new epic model for the Druid’s Spriggan form. Complete with hardened bark, a variety of natural growth, and an ancient glowing power within, our new Spriggan form stands ready to take on any threat.

We’ve given our new Spriggan form an exciting new transformation animation and integrated the casting of a new ability while transforming: Thorn Shield. Casting Thorn Shield while transforming into Spriggan strongly communicates the fantasy of becoming a tree. It feels great in dangerous situations, and connects the player with the soul of the Spriggan fantasy.

This patch we have updates to all of the abilities which include replacing Vale Blast with Spirit Thorns, and replacing Root Wall with Thorn Shield. Let's dive into each of these decisions a bit more below.

Vale Blast, while decent at single target damage, felt rather lackluster and its theming did not fit well. Generic green laser blast of sorts doesn't really scream "nature magic." Also, we're removing Ice Thorns from Primalist this patch, so we would be lacking in any spell cast where you are creating thorns, which is very appropriate for a nature caster. So that led us to building Spirit Thorns. This is a single target, or multitarget, skill that feels much more satisfying to use than Ice Thorns or Vale Blast currently does, and really hits on that Spriggan nature theme.

While we loved the theme of Root Wall, we’ve ultimately decided it wasn’t effective or impactful enough, so it was time for it to retire. Its replacement, Thorn Shield, is a rather different skill compared to Root Wall. It forms a protective barrier of thorns around you that grants armor and reflects a flat amount of damage to attackers. When the shield expires, a burst of thorns shoots out and damages all nearby enemies. For Thorn Shield, we wanted to double down on the thorn theme, and also fully empower and support a “thorns” style of gameplay, where things die just from touching you. Being able to cast it on your companions also enables a fun playstyle where you stand back and send your thorny bear into battle for you. Or you can even sprout some thorns on your friends as they charge into the fray.

Healing Totem and Summon Vines are both keeping their current base functionality but gain visual updates and several new options in the overhauled skill tree. The reworked Spriggan Form minions often feel like new skills when using them in battle.

As we discussed in the Werebear Blog, we’re moving away from a mana based resource for all Druid transforms and they will use a new resource called Rage. There will be many ways to recover Rage such as the examples below. 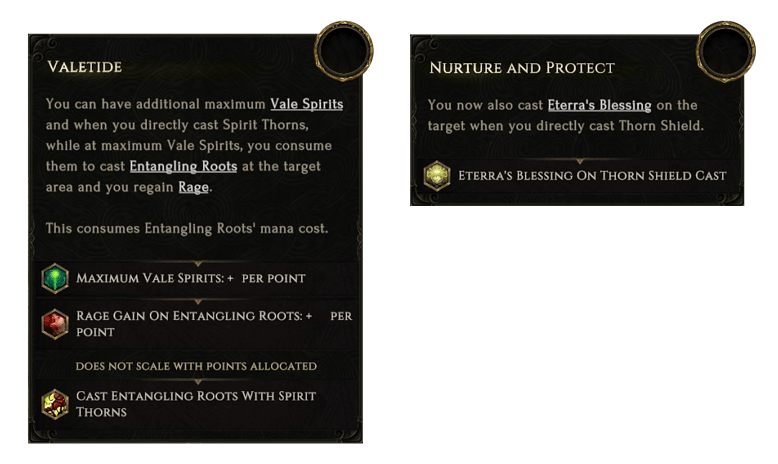 The entire Spriggan skill tree has been redesigned with the intent to allow our community of Travelers to create many new builds and explore new ways to play.

Here are some of our favorite new nodes:

Great Vine lives up to its name

Thank you for joining us for this reveal of the changes coming to the Druid’s Spriggan form in Patch 0.8.4. We hope you love the new direction for the Druid and, as always, would love to hear your feedback in the comments! We hope to see you again tomorrow for a sneak peak at our Druid’s new and final transformation!

Here is a peek at what you can expect this week! See you next time!

I bet that QuietForMe guy is drooling over these changes

Spriggan is my main build, I was a bit scared.
I’d like to see how far from the center some nodes are, but overall I’m very happy with all this.
All that looks very cool!

Also, we’re removing Ice Thorns from Primalist this patch, so we would be lacking in any spell cast where you are creating thorns, which is very appropriate for a nature caster. So that led us to building Spirit Thorns.

Will Spirit Thorns be a new base Primalist skill or specific to Spriggan?

No movement skill is an huge oof! Was hoping for at least phasing to combat getting stuck in bigger pack pulls to allow for smoother gameplay! The fact there is no mention ill assume either not revealed or not added. So there are going to be that clunky nature of sometimes getting stuck on environment pieces or mob density without any real reaction counters play other than healing, potion , regen/ leech options. my major worry here.

loss of ice thorn is okay to me. Does this mean we will get a replacement for it? Does the 3rd transformation make up for that lost skill slot?

Thorn shield is interesting. but flat amount of reflect without huge scaling can often leave much to be desired. Also will it be able to shotgun if yes then flat amount makes a lot more sense seems wildly powerful if that is the case.

Built in rage generator is really nice. Great to have options but already seems like maybe if you want healing totem your stuck with rage per vines. Does that means vines also have no cap? there was no tell if vines are capped now. I know giant vines are capped but nothing said about smaller ones.

I’m happy totems and vine survived that is my favorite playstyle cant wait to sink my teeth into this skill. Thanks for all the Great Work!

Spirit Thorns is a Spriggan Form skill. What Ice Thorns gets replaced with hasn’t been announced yet.

I liked pretty much all your concept arts for werebear and i am happy with the final result.
But concept art #3 outshines everything for spriggan imo. Would have been my favorite by far.
Looking forward to play both!

No movement skill because of a Tree fantasy is horrible. Trees cant move at all so that is already gone. If we are going with moving trees why cant they have a movement skill? One class not having a good movement skill is such bad design.

Form looks great, that green skill he is shooting looks satisfing, but wines and this one big one and shield torn doesnt look to me so much apealing its little bit cartonish (wines) and i do not have feeling they are connecting monsters when they hit at all… Just my personal observation

Edited : also whrn he is transforming to sprigan and from sprigan it looks like its doing it instantly, also why he cant have some sort of like underground root movement that is visible on the ground when he is moving in way of transforming to ruts and back to itself when apearing?

The Spriggan would not utilize any movement abilities. Being a tree-man, he can’t move very quickly without breaking the fantasy.

I feel like the fact this is a thematic design goal is worrisome. I don’t think many/if any ARPG players like the idea of not being able to use a movement skill, or even having the option of using one not included. I think there are many ways to keep the same overall thematic design while including a movement skill or some sort of mechanic that can deal with large packs/mob swarming. Either way, I’ll wait to play it before pressing on this.

The Spriggan would not utilize any movement abilities. Being a tree-man, he can’t move very quickly without breaking the fantasy.

Valetide sounds like an interesting ability, but hard to make competitive. Vale Spirits used to be created from high cast speed and casting Vale Blast, and it looks like that method will be intact, making every X casts of Spirit Thorns be Entangling Roots instead. Could you make a viable Spriggan Form build based on Vale Spirits? And will it be worth it to consume all of your spirits in one go just to make a stronger Entangling Roots cast?

I’m also interested to see if someone can make anything out of a real Thorns reflect build, as that’s not something that has been explored much at all yet.

Druid it is for the next patch

sad about ice thorns, i found it a really fun feeling skill

That’s another great improvement, visual and gameplay wise except for a few nitpicks and one a bit bigger as others have already mentioned. The big one is having zero mobility just because you are a tree. Other games have fallen into this trap where they lean to much on the “lore aspect” instead of looking at the “gameplay aspect”.

As much as I understand some of the limitations for a Tree type character, I don’t think limiting movement contributes much to the whole idea of “this guy is for sure made out of wood” other than just removing fun/interactive elements like having mobility.

I’ve noticed most developers will either lean into the no-mobility tree-like character and making them either extremely tanky (he’s made out of bark) or still try to incorporate some mobility skill that does feel somewhat druid/spriggan/nature like for example, turning into a swarm of bees having X increased speed and dealing dmg along the way or maybe something like extending a vine from his hand that pulls him closer to his enemies/terrain.

This was a bit of a rant but please don’t lean to much on the lore and forsake gameplay elements because of such. I just came up with some random examples but I’m sure there are many others for having some form of mobility on a tree.

Also the tiny nitpick I have is that the Vine slamming the ground doesn’t look that impactful to me. I’d expected some sort of indicator of where the Vine is slamming and maybe some dirt/rubble/stone flying up (this could be the indicator, it doesn’t have to be an actual line indicator). It just feels a bit floaty like, if I’m truly honest here, like most of the skills in the game. I’m hoping this will be looked at more closely in the future because having something feel impactful makes gameplay feel TONS better.

Also also, the totems just look like regular … wooden logs? Is this something that will be revisited with the inevitable totem rework or?