UPDATE: This is the finished version of my Ignite Marksman. It is not as powerful as my Bleed Puncture Build when it’s about pushing Arena. But with good gear i think you can still manage to beat wave 200. Far more enjoyable in Monolith though because of great clear speed and sweet visuals. 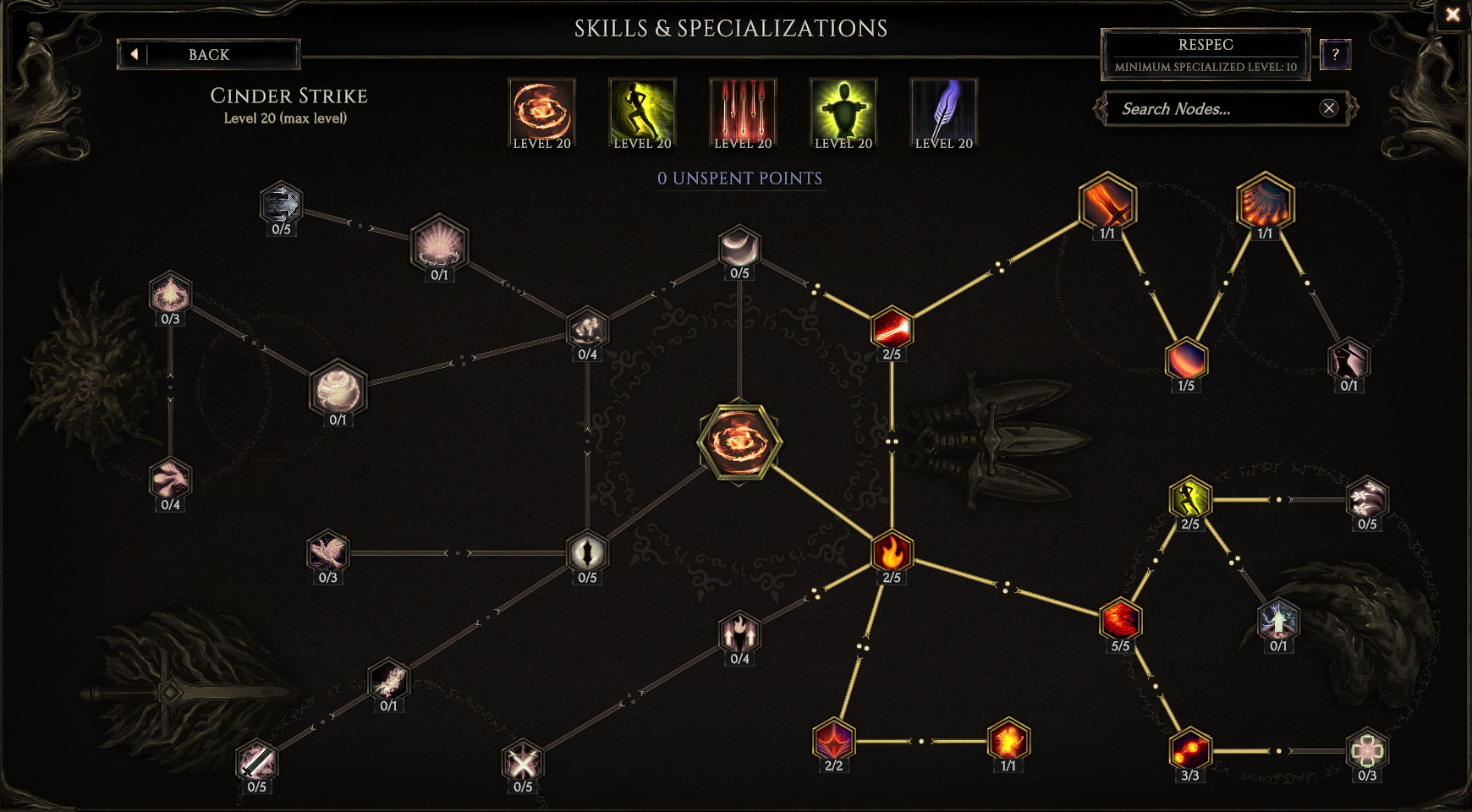 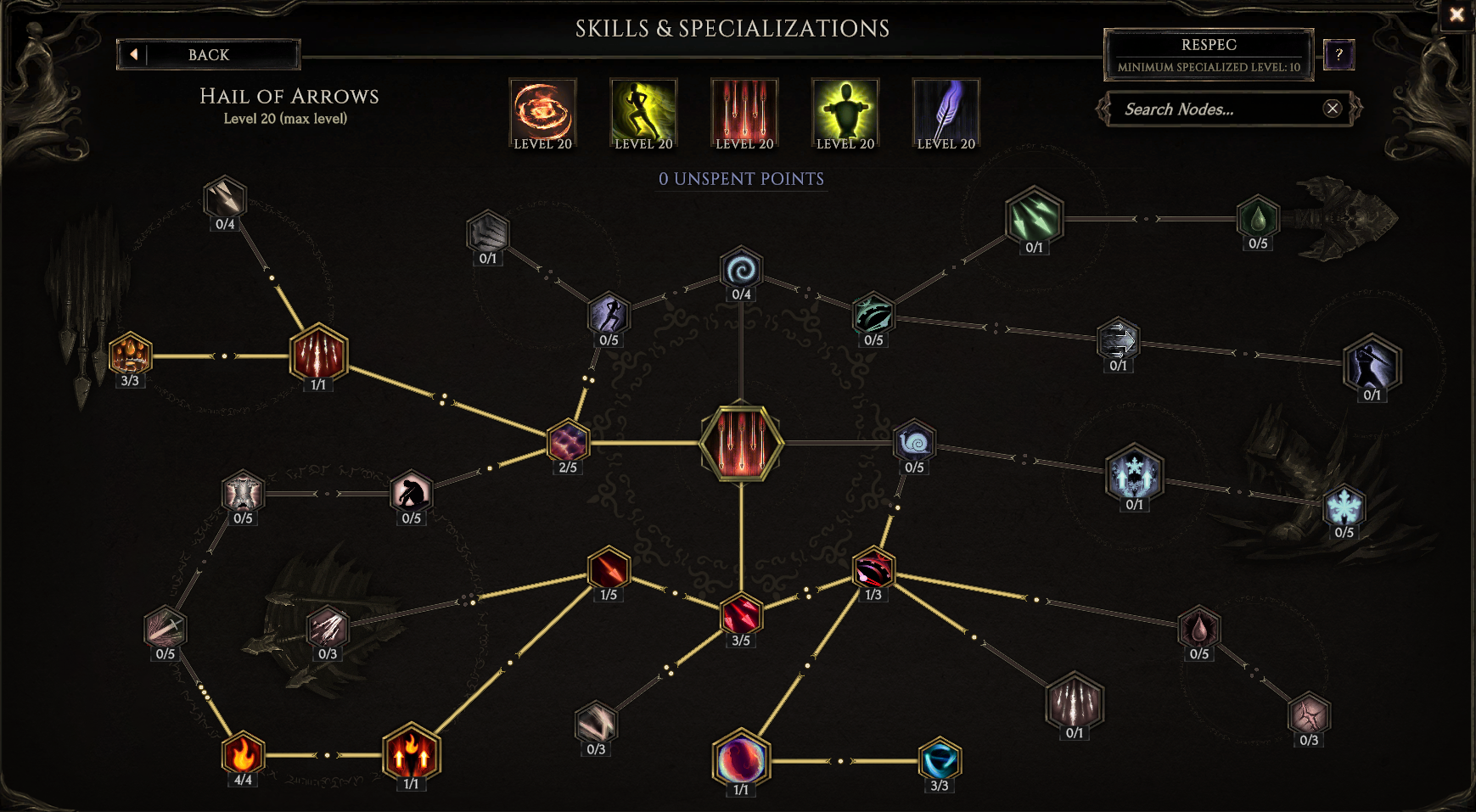 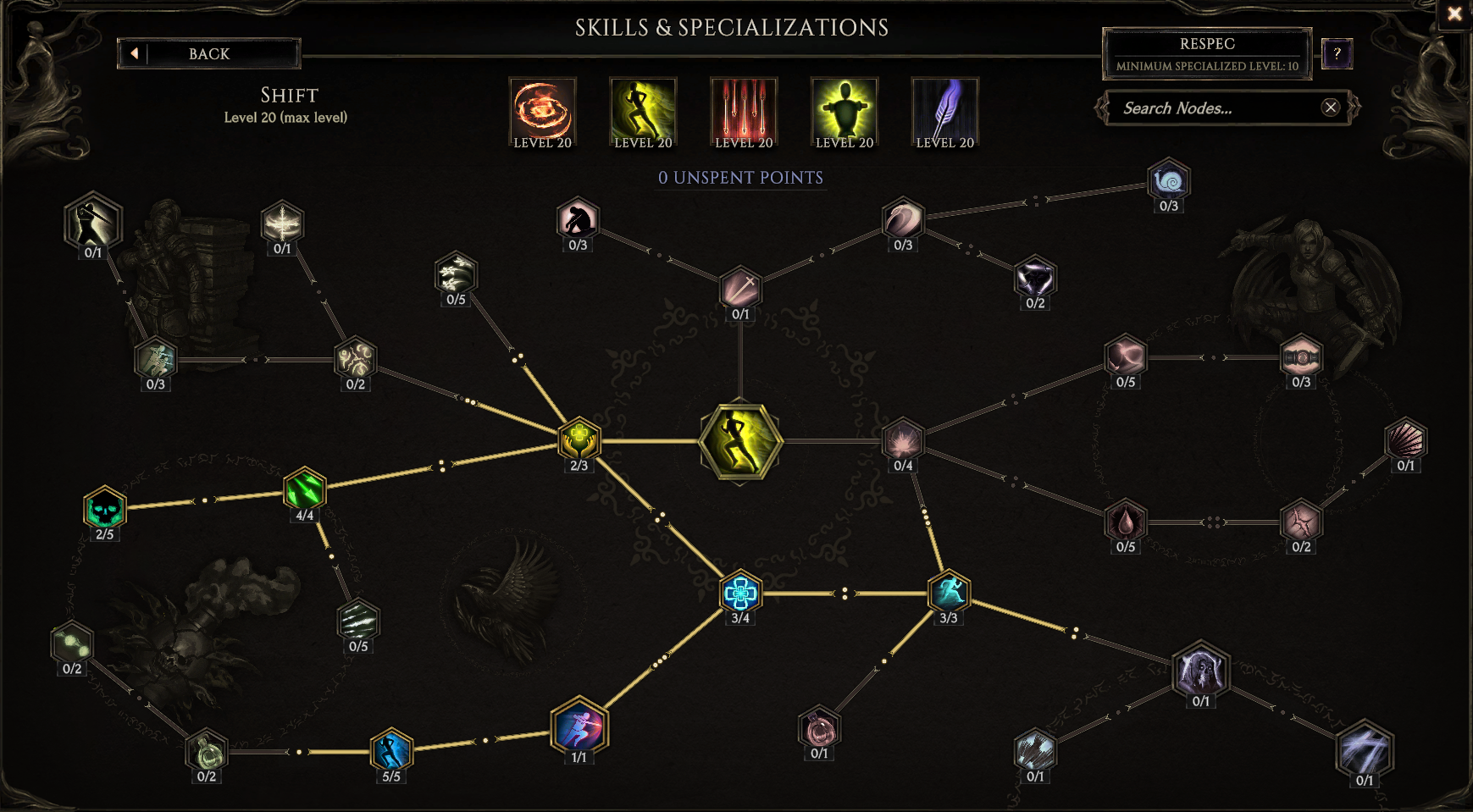 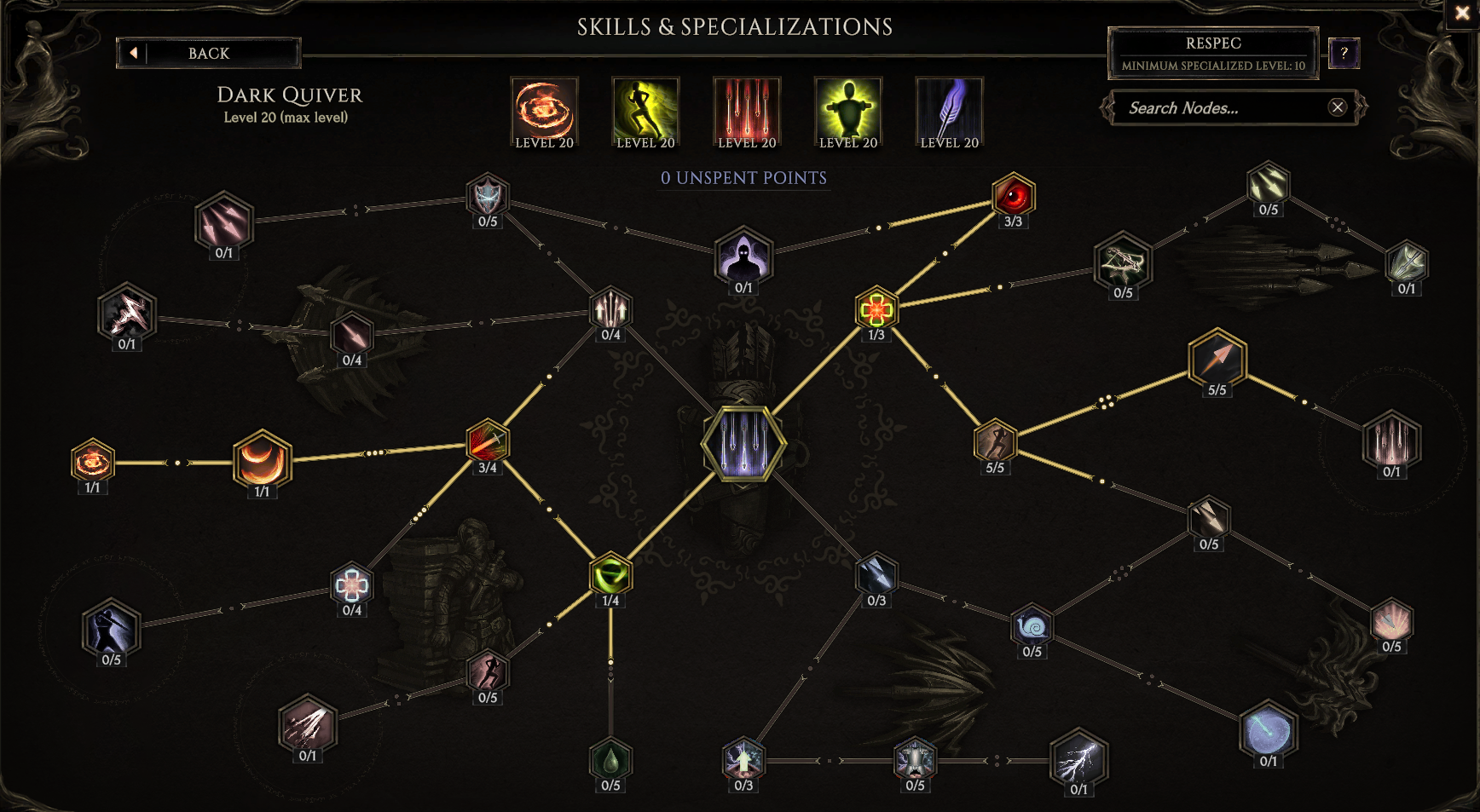 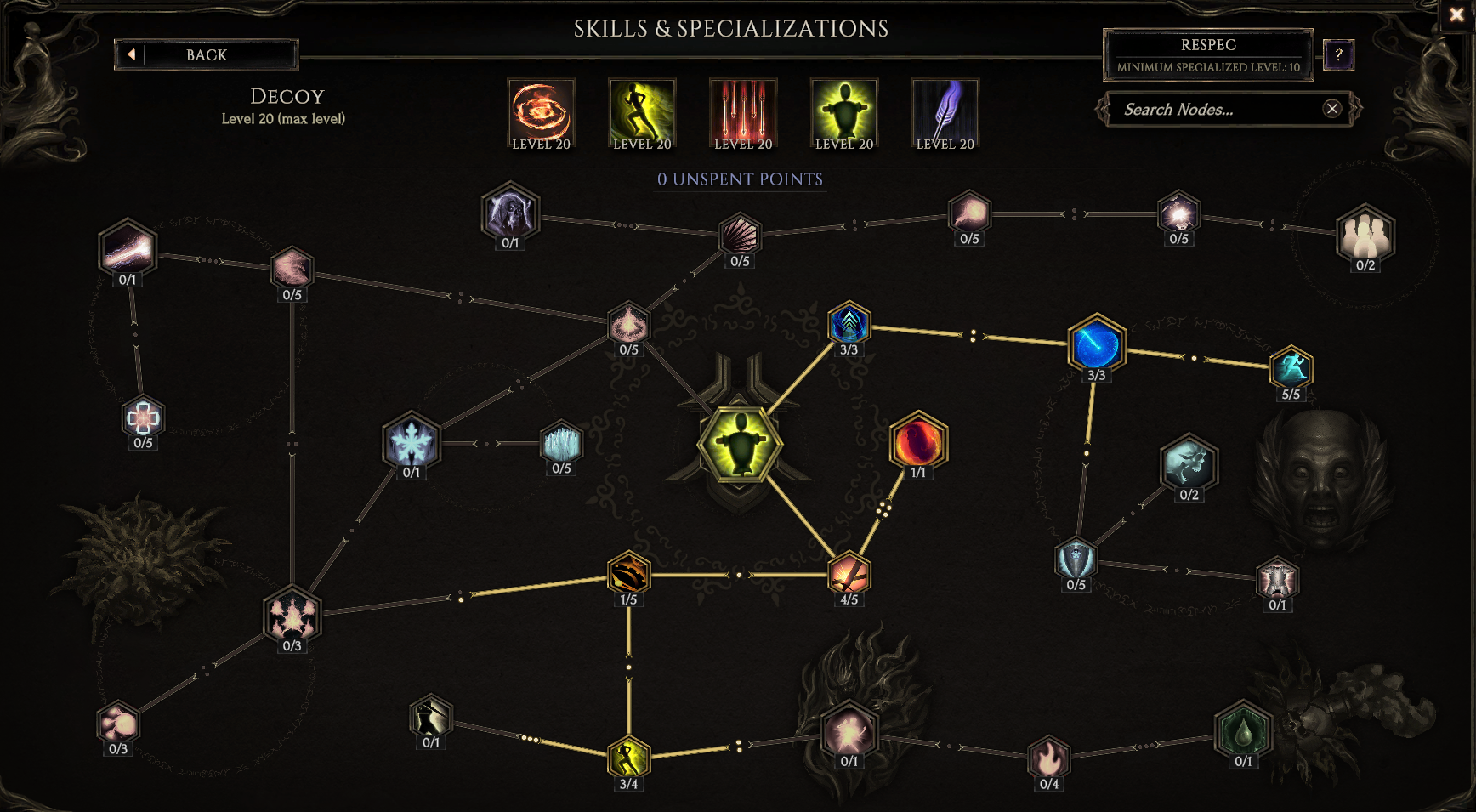 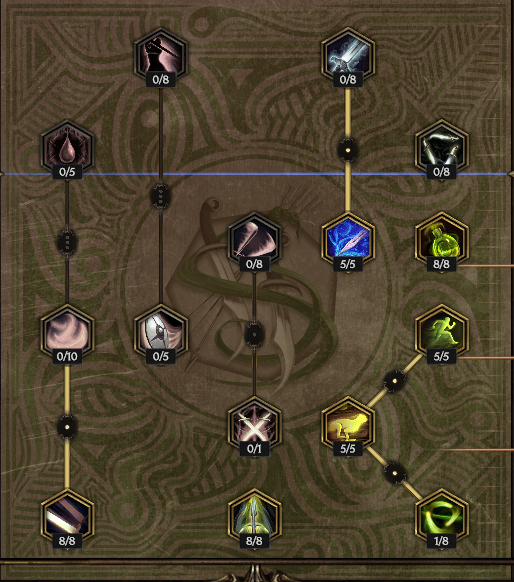 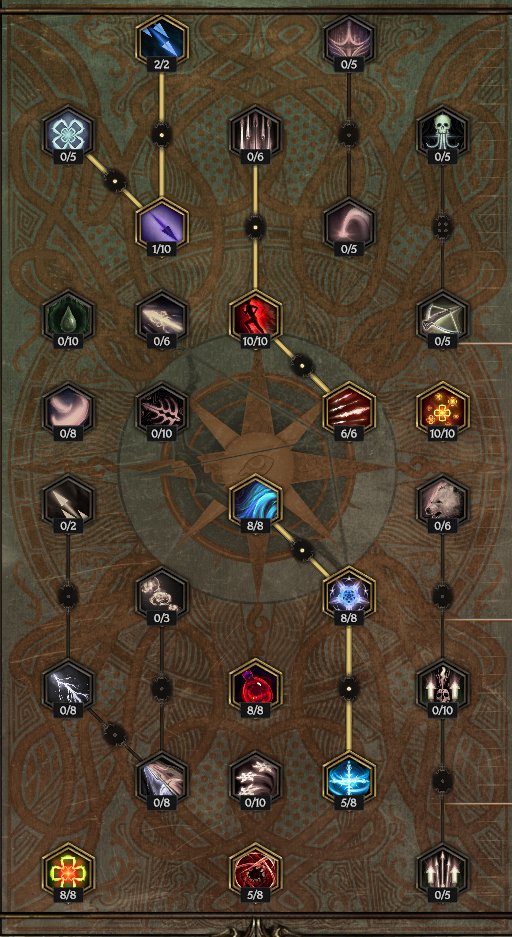 Quiver: Nagasa Quiver (up to 60% poison to ignite)– Bow Attack Speed & Dex are the best offensive stats because we get 10% inc dmg per point of Dex.

2x The Invoker’s Scorching Grasp (only for leveling) 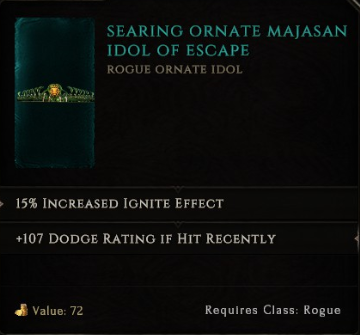 Suffix can be ''Chance to slow on Bow Hit/Dodge Rating if hit recently/Poison Resistance
Choose whatever you need and prefer.

Choose whatever you need and prefer.

Will see how it goes and compare with your build…

Yep, definitly an awesome skill with a lot of potential. The whole skilltree gives so many opportunities to build around that skill for both melee and bow. Let me know how your version worked out at the end, i’m really excited about all the builds coming out in the next days!

Hi, i use a build close to yours
I’m just not sure what skill used, so i take cinder shot, swift, and the rest is confused.
Decoy totem is basicaly just a taunt and dodge bonus, it’s ok but nothing crazy ( i just finish the story, i suppose the taunt help after ) and i’ve tried the ignite buff on it but it’s useless.
And for the two left it’s big question, hail of arrow is actually low level so i don’t know. ( after seeing your build i give it a try )

But i can’t choose between smoke bomb ( 100% poison chance inside> so 100% ignite chance, shroud for dodge/ward, and shroud for glancing blow/dodge, blind )i’ve tried the 5 added ignite on smoke bomb end, but after some try, it’s look useless.

And dark quiver ( culling strike 15%, frenzy and some other thing but only for one arrow )
The fact is dark quiver is really weird to play, move to take the arrow is just a pure dps loss, the 15% finisher is irrelevant, when a mob have 15% or less life he just died from the ignite and for bosses it’s just a little a bonus ( 15% seems a bit low to me)
So i don’t know, i just keep trying.
Oh and i see shuriken can be used to give 150% ( or maybe more ) armor, that could be an idea too.
So if you any advice that could help me

And sorry for my english, it’s late, i’m tired, and i’m not that good in english.
thanks

Hey no worries, i’m not a native speaker aswell

So yeah Cinder Strike and Shift are mandatory, but you can use Shift also in a different way.
For example you can use Acid Flask with 100% global poison chance (converted to ignite) and only proc it with Shift (Parting Gift/Arrival Gift nodes). Takes some practice to position yourself against the enemy to get that dmg buff.
The ignite buffs from smoke bomb and decoy i also found myself useless, that’s why i chose to gave those 2 skills a defensive role.
Decoy is probably the most op defensive skill for rogue. Especially in arena or hard monolith fights. Together with 2 charges and frailty/dodge/haste this skill. In Monoliths i don’t use it that often because there we are tanky enough without decoy.
Dark Quiver is weird to play for a DoT build especially because you wanna keep up ailment stacks to provide good dmg. Running away from the target to collect a black arrow takes some time, that’s why i use Shift every 3-4 seconds to teleport onto black arrows granted by the Until Dawn node mainly for the frenzy buff. I tried to build an allllrounder build for both arena/monolith and the 15% culling strike helps alot with mono bosses.
Hail of Arows i just use for extra dmg because it’s easier and faster to clear trash mobs fast. And also the crowd control effect from Skystrike-Condemn helps alot. With Cinder Strike alone we have no mana issues, so i took that skill into my build.
Shurikens i never tried with this build and could be another idea. But our main focus should be around dodge and resistances at the end. Let me know how the armour buff works out at the end, i’m at 20% armour right now which is not much and focus to get dodge always over 70% with cinder strike.

Thanks for your reply

After some test, shuriken indeed look’s useless, bonus armor is good but cause we have low armor, multiplier is not really interesting, and cast it every 5s is annoying.
( maybe it can be good on poison/melee or other build )
and i’m curious about the boots you use, ignite effect is not additive? it’s more like “more damage” i guess? cause that’s the only really interesting part of the boots.
And what about’s the maehlin’s hubris in glove slot? stat is ok and the bleed chance to ignite chance can be cool i guess ( with smoke bomb we have access to crimson dance for example)

Yes ignite effect is a ‘more’ multiplier. If you dont have the unique boots you can also use rare Solarum Greaves or Heoborean Boots for additional Res. Look for High Dex, (because each point of dex gives you 10% increased dmg; 4% for cinder strike and another 6 from flammabile toxins), movement speed and then crit avoidance/dodge/hybrid health or set resistance depending on what defensive stat you lack.
Maehlin’s i used before when i played bleed conversion instead of poison. But with poison conversion you get get more dmg with dex scaling even though maehlins and the disembowel node from rogue base tree can give you high ignite stacks aswell. But i switched to rare gloves because i needed some defense on my gear. I had too many uniques.
I think dodge & high health is the most important defensive stat together with movement speed and your own playstyle

thats the best defensive if you can manage to play fast and stay away from mobs. After reaching a good amount of dodge & health and 100%crit avoidance you can focus on getting additional resistances. The Gear Planner that i linked shows you that you can get around 40-50% res. Don’t forget that the 52% dodge is without Elusive buff from cinder strike. I always have over 70% dodge when i attack with cinder. Poison is the only one you dont need to focus on gear, because you can get some points on rogue tree.

Thanks for the guide, Trikster.

That said, I love the sounds, visuals, and feel of the skill.

I tried the Overexertion/Tireless branch and frankly the mana cost appears too high. Maybe someone with good math skills can decide if there is an acceptable breakpoint where the mana cost becomes bearable.

I will try the Daggers next since I don’t use much mana.

Glad you like it and welcome to the community!
Yeah i think overexertion is meant to be a good aoe nuke clearing skill while having puncture or flurry as mana regenerator, but because of the high mana cost its hard to stack ailments with this on single target. Prob more hit/crit orientated. Let me know how you like the burning daggers added to your build.

thank you for this build. Cinder strike on marksman’s playstyle is very fun.