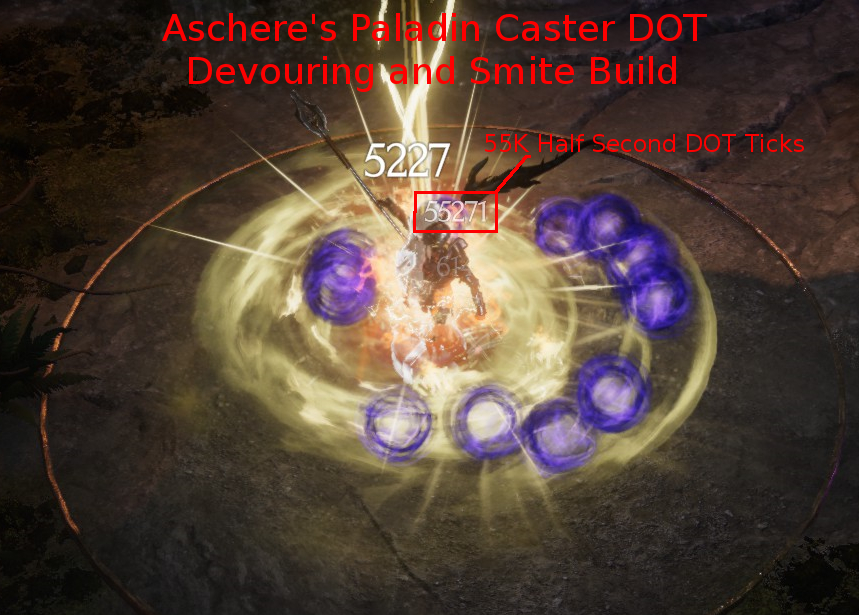 Introduction:
Below details out one of the strongest builds I’ve played to date and was easy to get to level 100. 0.8.3 brought a lot of very powerful buffs (Smite DOT and Lunge DOT/Smite Buffs) to this build such that I think it is a strong S-Tier level build. The build will easily go 200+ waves in Arena or do 200+ corruption monoliths (I don’t enjoy Arena, but I ran a single try and hit Rank #20 on first try hitting wave 203).

This build revolves around many hits (10.4hits/sec) with Devouring Orb, Lunge, and Smite to stack enormous amounts of ignites/electrifies (and some other minor DOTs like Bleed/Poison/Doom) while sporting an enormous health pool with layers of defense and decent life recovery. Due to the auto-attack AOE nature of Devouring Orb/Abyssal Orb it clears monolith maps extremely fast (70% movement) just lunging from pack to pack as everything explodes. AOE damage with lots of little mobs is easily 500K+ per enemy. Single target without other mobs dying is around 135K DPS (110K DOT, 25K Hit) when building tanky with the option to get 200K+ DPS if you want to be more glass cannon focused.

The playstyle is very similar to a Devouring Orb Void Knight. with a million purple explosions from packs exploding making it one of most fun types of builds to play. While it plays similar to a Devouring Orb VK, this build scales damage much differently and is far tankier. It does require multiple skills being used so it is not a one button build.

This build has an extremely high damage cap. It is weaker at low gear levels (but still above average), but scales FAR FAR better than most builds out there. One word of caution is that it is very dependent upon a good crafted weapon. You might want to try crafting a weapon(s) before trying the build. The remaining gear can be easily crafted. See the gear section for more detail.

This is a very long build guide where I tried to detail out everything I could possibly think of. If you’re starting out on it, you don’t need to read everything and can use it to learn as you level. It should help you learn how DOT scaling works in this game pretty well as it works very differently than hit builds.

There are two variants: (1) Ignite based or (2) ~50/50 damage split between Ignites and Electrify. The base guide is setup for ignite based. See Variant section for more detail on the electrify variant and the differences between the two builds.

I’m a new player and i tried this build today, it’s very powerfull and funny to play!

Thank you for sharing this! Cant wait to try it out

Thanks for the build. I’m enjoyin it!

If you are using a loot filter for this build, can you share it for us?

Thanks again and have a great day!

I’ll probably make one and add one later. My current filter is a bit of a mess given it covers about 6 different builds.

Patch 0.8.3C: “Fixed a bug where the Charged Hand node on the Smite Tree had no effect.”

Interesting take on Smite! I’ve been playing with crit Smite, never thought that DoT Smite would be great. Will try this soon!

Thank you very much !

anyone got some gameplay videos? very courios how it plays. it sounds kinda exhausting with 2 buttons for damage but im also very interested

First, there is only one button for damage (Smite). Devouring orb is set to autocast so you don’t ever need to manually use it (and it auto-damages enemies. it’s roughly 60% of your DPS so you can often just run past mobs without even attacking). Lunge is a movement skill and manually used. For Holy Aura, it’s an on-demand buff (I use it whenever facing a tanky mob or when i take a big hit). For Sigils, i usually just cast 3 of the 4 at start of map, and then they maintain the rest of the way (for bosses like Shade you’ll need to recast every 20 seconds).

As far as recording, I just recorded something (first time ever recording anything!). Added to guide: 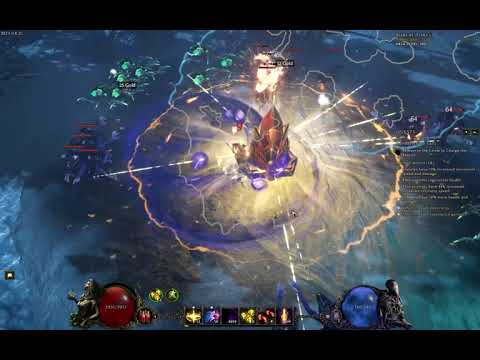 My only gripe is orbs + sigils, ouch, as discussed here Annoying short duration self buffs - #30 by Trasochi

gave it a try since i got a composite staff with a t6 damger over time, T5 elemental dmg, T5 ignite chance and chill. isnt the best staff but its good enough. yet the rest of gear isnt good enough for empowered monos, but every other are a breeze.

some thing i noticed when looking through my idols. a 4x1 idol with timerot chance exists. stacks up to 12 times. probably not the biggest dps boost but i will try and see if the inc stun chance is good.

Trying this build now, and it’s hillariously fun. I barely bother with sigils for regular monos, not up to empowered yet tho, it’ll probably be a different matter there. I do hate that pretty much ANY viable sentinel build includes sigils, because it’s such a tedious skill to use. I really hope it gets a revamp at some point.

I was curious as to whether there’s a reason you’re not using a composite staff? It has an extra up to 120% DoT damage. The staff in the build planner just has increased mana cost and Adaptive spell? Is the build planner gear the “optimal” gear, or just what you’re wearing atm?

Build planner is what my character is using due to exalt roll. It doesn’t show it, but i have near perfect rolls on that staff (and low mana roll too): https://i.imgur.com/WqA70ta.jpg

Hey,
Just wanted to say been having a blast with this build. I’d been trying to figure out a fire dot build for a while now but wasn’t sure if I wanted to try something with paladin, or just stick with mage.
These gloves that I dropped seem like they work really well with the build. At least until I can farm the blessings.

Also, which would you say is more important, the ignite or the ele/dmg over time? I have a decent rolled Pontifex, but also a T5 ele dmg over time/T6 dmg over time staff (a little over 600% total - but no ignite chance). I’ve been trying them both but I’m not sure if the extra ignite/cremate from pontifex is better than the flat 600% dmg that also applies to void and lightning as well.

I just came in to say this build looks really cool with both the yellow and purple explosions all over the screen. I never thought of the idea of relying on the DoT ignite part of the orbs/smite when I used to go full void knight devouring orbs for the flat damage.

For a new character though, what would you recommend building into though first? I know you mentioned not to start the build until you have some good weapons first. So to start, do you think a warpath ignite build would be a good start before eventually switching over?

Also, do you think Javelin with the banner would be a boost to this build? Let the enemy pick up the banner and carry it around as it casts Smite which would trigger more Ignites?

I hope they allow us to keep numlock for the future release because it works so well for this build!

Well, not sure what Aschere would say, but I did some testing between pontifex and my own composite staff, which I managed to get T5 with ele dmg over time, dmg over time and ignite, plus 113% dmg over time implicit. I went from around 330 ignite damage with ~300% ignite chance to around 590 ignite damage with ~200% ignite chance. Thing is though, with the elemental and dmg/time boosts (around 600% total) also affecting electrocute, it drastically boosted single target damage. On top of which, the damage over time also affects Doom. Lastly, I also got the “Frostbite” blessing, which deals cold dmg over time.

Once you stack all the sources of DoT damage, I think the staff, with 300% - 600% (depending on DoT type) damage increase vastly outperforms the additional 80% or so ignite chance you get from the pontifex.

Plus… pontifex makes you take more damage from fire, and fire enemies in Enhanced echoes can nuke really hard, so I’d personally opt for the staff. The trade-off isn’t worth it… though initially at lower levels it was fun to run around as a pally with 15 fire skelly mages following you around ^.^.

What I’ve been wondering about is whether the additional 60-100% bleed chance blessing is better, and how it interacts with your damage outputs, vs taking the 50-70% crit avoidance blessing instead, freeing up a couple of suffix slots for added HP or endurance.

Yeah, I felt similarly. The staff definitely felt better but I guess I just wasn’t sure if there was more happening off screen due to the pontifex cremate mechanic.

Another small addition I’ve been playing with is throwing one of the 1x3 “inspiration on kill with void skill” in a slot to reduce the lunge/orb CD even more. The buff feels like it has 90%+ uptime with how many orbs are being spit out, and seemed worth for a single 1x3 slot. I happened to find mine with fire dot suffix (up to 60%) so it didn’t feel like I was giving up a slot or anything drastic.