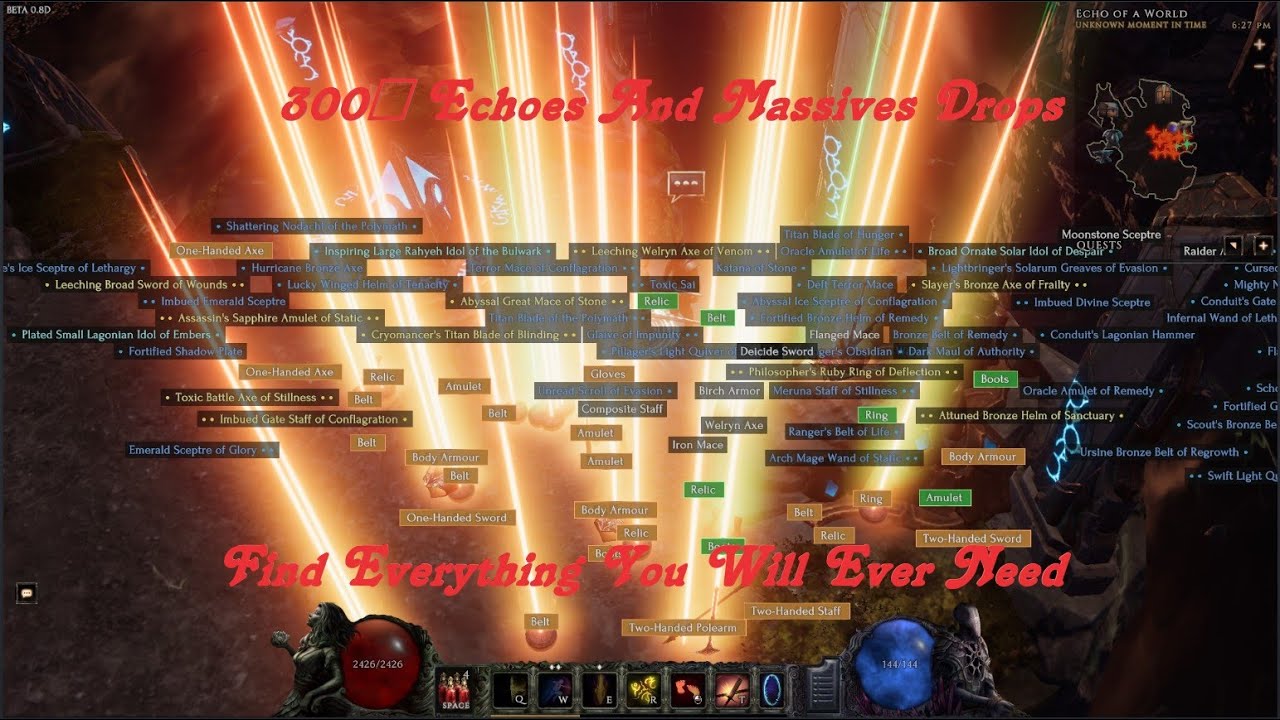 The main affix on idols you want is % increased health regen and Increased Vengeance damage. 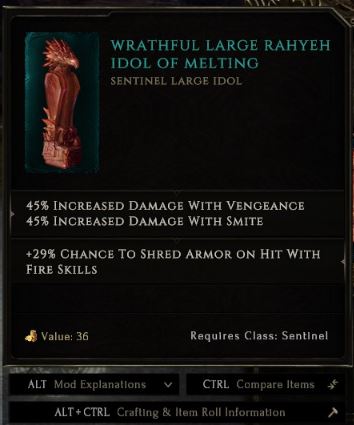 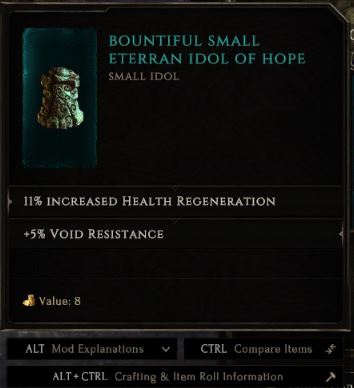 Okay the music ‘somewhat’ timed with the loot dropping in the opening has had me chuckling for the last 15 minutes.

First let me thank you for all your build guides. I don’t play much of the game, but I always appreciate them because they make me see how varied and good this game is and can become.

One small issue is that I never have the slightest idea of how to level those builds. Most of them have “endgame” gear requirement, like uniques, specific affixes, idols etc. But to get those you need to reach and farm some endgame. But to do that, what kind of placeholder gear can you use ?

I end up asking myself that on most of your builds, and it’s a little discouraging as a Last Epoch noob with little available playtime. I know it’s a ton of work already, but some levelling tips here and there would be amazing.

[image] YouTube Video : https://www.youtube.com/watch?v=2T47sbsra6w&t=8s&ab_channel=Apprentice'sCorner Hello, this is Dr3ad from Apprentice Corner, in today’s forum topic is going to be all about leveling. Leveling builds, leveling efficiently, leveling fast, how to do all of this and more in this forum post/guide. This is meant to be the companion to the video, so watching the video and reading the guide will lead to the best comprehension of what I am teaching today. This is going to be a …

i have a few guides for leveling but atm only for rogue masteries and acolyte masteries. Ill have Primalist/mage/sentinel done in the future. The leveling guides i put out dont require endgame gear and there usually level 1-50 guilds with a setup that allows you to jump right into the MoF. From that point itbecomes your journey to find the items needed and slowly convert over into the build you are watching. Also remember most my builds dont need to have exactly what you see for them to work, alot of them will work with just tier 2 and 3 affixes and not ven exactly the same ones.

Ill try to add leveling tips in as i get guides put out.

Very easy paladin build… Not as “fun” as the Captain America shield thrower paladin but even at half the final health and health regen (and respecd skills at level 10) that you have in your vid, this build is tanky as hell and virtually unstoppable. Not usually a fan of autocast but it makes this easy as hell to play cause you just have to concentrate on the clunky Sigil skill - which is ok as you dont have to worry about anything else.

Havent got to the levels where loot drops like rain, but I expect that could raise the “fun” level of this build beyond the do-gooders shield throwing…

Does slightly low dps mean more like it doesn’t touch your crazier dps builds like the reave void knight and rogue builds, or that it actually has fairly low dps?

just means its slightly lower than the crazier dps builds. Its not a zdps build, but its not a nuker either.

Kind of surprised you didn’t just use Undisputed again. Do the set bonuses from dual wielding Shards stack? I’m actually interested in a regen build now, but I see room for more damage, maybe even using other skills. I dig this.

Not giving you crap - anytime someone mispronounces a word it just means they learned the word through reading it rather than hearing it. Google has a really good pronunciation guide feature with text-to-speech. Epoch is particularly a funny one because in British English it’s ee-pock whereas the American English version sounds more like the word epic.

No, they aren’t.
Also, it’s riposte, not reposte.

Epoch is particularly a funny one because in British English it’s ee-pock whereas the American English version sounds more like the word epic.

Thanks for correcting my typo of riposte.

I think if you check pronunciation guides online, you’ll find those to be generally correct/accepted. If you pronounce them differently please tell me how, I’m curious! I pulled those pretty much verbatim from Google.

When I first checked out some videos about Last Epoch I questioned the pronunciation and did some looking around, even asked a Norwegian friend of mine how he pronounces it since he originally learned English via British English. His perplexed look when he googled the pronunciation guide was quite amusing! I’m not making this up, check it out yourself.

Full transparency - I’m coming from a place of care, not criticism. I don’t mean any offense and I hope my word choice accurately conveys that.

Epoch is particularly a funny one because in British English it’s ee-pock whereas the American English version sounds more like the word epic.

As an American I have also never come across anyone who would pronounce this word as ‘epic.’ And if we’re going to use pedigree, I actually use language, both written and spoken, as an actual tool (working with actors and screenwriters) on a daily basis.

There may be some dialects in American English that might slide closer to sounding like eh-puck but that’s not going to be common.

For instance Deicide. It can be pronounced DEE-ah-cide but equally as common is DAY-ah-cide. And there are probably others.

Correct english as a ‘living’ language is governed by its most common usage. So to claim something is the ‘correct’ usage you’d have to know what is most common. More apt might be a suggestion that this word is USUALLY pronounced ‘this’ way when I’ve heard it.

And when it’s a non-native language speaker all bets are off as they are most likely still getting a hold of how form various sounds, like speaking Spanish without knowing how to roll your 'r’s. Heck even amongst “English” speakers you find a variety of ‘strange’ sounds. Try pronouncing Siobhan.

Agreed! It’s definitely worth talking about and I find weird/awkward pronunciation more amusing than anything.

For deicide, yeah the vowels are up for debate, but my main point is that there’s only one c or s sound in the word. Adding an extra consonant in there is just making it more difficult than it needs to be

Good call on reframing the language to how things are usually pronounced rather than what’s correct. I’ll keep that in mind.

I know a few Siobhans! I’ve worked in IT Support for over 10 years and consider myself lucky to have spoken with a very wide variety of people from different cultures and regions to get a diverse perspective.

Kind of surprised you didn’t just use Undisputed again. Do the set bonuses from dual wielding Shards stack? I’m actually interested in a regen build now,

The set bonus does not stack but you do get an additional +6-10 flat health regen when is 20% of your total regen. You could throw on undisputed and gain some damage and lose 200ish health regen.

As for pronunciations ill try to remember them.

Glad to hear your enjoying the build and its got you wanting to make more!

Cool, good to know. I love how many different viable options there are in this game.

I like heavy CC builds like stun/freeze so that’s definitely another perk of dual wielding them. I imagine there’s some rares out there that could increase your freeze rate too.

Thanks for putting out so much content, I’ve definitely learned a few things from your videos!

Another uber build! I thank you for this. I do not have the time to play as much and I rely appreciate the work you do.

Hello, as stated on the youtube video the hp regen node of Smite does not work because we are not healing ourself with Smite.

Also, I wonder how much waves you reach with this build? Maybe if we swap to solo wielding with a shield we can tank more.

Hello, as stated on the youtube video the hp regen node of Smite does not work because we are not healing ourself with Smite.

To get to the Quiet Mind node for mana cost reduction.

This is a true statement, but you have to place the points there to unlock the 5th maximum sigil so that you get an additional 50% health regen.

As for the smite not healing and proc’n the health regen bonus in its tree, pretty sure thats a bug.

“The Regifter” or “How To Turn Your Pala Into A Test Dummy”!