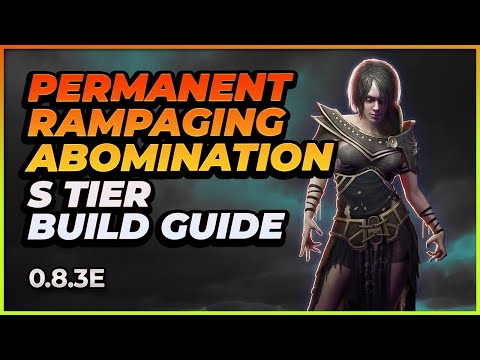 So i was thinking, why not put a point into blind fury, in dread shade tree? Most of the minion damage is melee and the egoism node on the tree makes it always crit (At least it what it says) I dont see how this node would impact negatively the build, and you would have a 40¨% increase attack speed basically for free. I’ll take one point from Flesh Harvest (cause my abomination is almost always full health anyway) to try it out. If it is a bug, or some mechanic i dont know, cause i’m new, sorry for that. And thanks for the build, i think its kind janky to set up, but it works really well when you finish it.

Hey! welcome to the community!

You can defintely try it out. I used that node last patch but i was told i believe by @Llama8 it was a bug and it was suppose to halve the crit of the always crit node (which i believe just gives your minions 100% crit chance like gamblers fallacy does for us but cant see it on char sheet)

It may still be bugged meaning your still guarenteed to crit and so only get the benefit of 40% increased attack speed. I have no tried it this patch i just assumed it would have been fixed.

Feel free to post again with what you find

Ty the game is pretty fun and i really like your builds.

I tried it out in the dummy and in monoliths, and i didnt notice any diference in the critical hits, at least from what i’ve saw, all hits from the abomination were crit.

Nice! Good to know, next time i update this build ill be sure to switch a point over to that.

I can’t remember whether the devs said whether Blind Fury should override Egoism’s always crit or not.

There’s certainly a bug report for it.

You’re going to have to wait until your level is high enough (60) where an unspecialization gives you 8pts as a baseline. I had an Acolyte I shelved a while back who was only level 55. Assumed I could try this build as long as I had access to Abomination, but such is not the case

Hi. Seems like the abomination is based on physical damage, but the 1h and relic is giving necrotic pet damage bonus… any reason why this is so?

Thanks for the reply… was considering dragonbone axe for 1h and runed bones for relic, now not quite sure hehe.

Mess around with them and experiment:)

The tags only affect the skill’s base damage, they have no effect on any added damage.

How can I make the abomination permanent? Won’t it always eventually die to infernal shade’s 10% increasing damage?

Ah alright I was wondering why that node was in the build planner - its nice having him at max demonic possession stacks but re-summoning was a pain. Thanks for the reply

Interesting. would rather just have him be a little slower than needing to resummon every time I afk

what other affix I can put on the Weapon other than minion melee damage. I’m not very familiar with what is considered adaptive spell

You can put anything else you want, but it wont affect your abomination. You can change weapons to something that allows 2 minion suffixes if you like to do a little more abom damage.

I find that the abomination lacks speed movement, would it be interesting to take the passive veins of malice (necromancer tree). Or is the loss of life too great?