This is my take on the Firebrand/Flame Reave interaction with the new Spellblade passive tree. You can get around 1-2k ward on bosses & easily tank through all of Abomination, Void Rahyeh & most of Formosus’ attacks.

I have a lvl 80’ish sorc just collecting dust, maybe ill dust him off and give this a try tonight. thanks llama

edit: nvm, lol after watching that video… that slowass playstyle is not for me lol

Interesting build, I’d like to know how it performs at level 100

Shattered Aegis, gives you up to 80% armour at the cost of lower effectiveness on Arcane Shielding but overall you’re ahead

So Arcane Shielding becomes 60% more effective with Shattered Aegis, giving 16% DR and 32 Ward/sec with 5 points in Arcane Shielding at 4 stacks and you get the 4% armour per stack per point on top … it’s a win win.

@Llama8 getting it done! nice guide! I wish i had the time/patience to do written. Whats that?? youll do it for me? your hired! oh no no need to thank me!

So Arcane Shielding becomes 60% more effective with Shattered Aegis, giving 16% DR and 32 Ward/sec with 5 points in Arcane Shielding at 4 stacks and you get the 4% armour per stack per point on top … it’s a win win.

@Llama8 getting it done! nice guide! I wish i had the time/patience to do written. Whats that?? youll do it for me? your hired! oh no no need to thank me!

yes, it does take quite a lot of effort to write these things out, you’ll notice that I left quite a bit out of this guide compared to my other ones (like a detailed section on gearing) as I was getting a bit tired of writing…

And yes, I had actually thought about transcribing your guides. But I’m lazy and you have a lot of them…

thanks for the guide, llama! as soon as i saw the info for firebrand i knew it would pair well with eye of reen, but i’m glad to see you’ve done the hard work of actually making it into a build. this will be my first character for the new patch!

I did try Alluvion, but it did slightly higher damage as an Eye of Reen with slower attacks & no shield (less tanky) on the dummy. Though it does also have the wave on melee attack.

All of the above was done on gear in the 20-40 range (because I’m lazy), so I’ll try & rework the gear section & rework my gear to be less crap. I’d also like to try a crafted 2-handed weapon to see how it compares to an Eye of Reen & Alluvion.

Also trying the Flame Reave version right now. Good guide llama! Took some ideas from you over to my version, really enjoying the new SB so far <3

Do you know if Frailty work on bosses? or just white and yellow (rare) mobs? i was thinking in getting this on my paladin, cause damage reduction is always nice

Yes, it works on everything. It’s not particularly useful on white mobs (& yellows to a lesser extent) as they die too quickly, but on bosses it’s certainly useful.

I very much prefer the written out guides as they are easier to reference. Thank you for these llama

Now with a gear section. 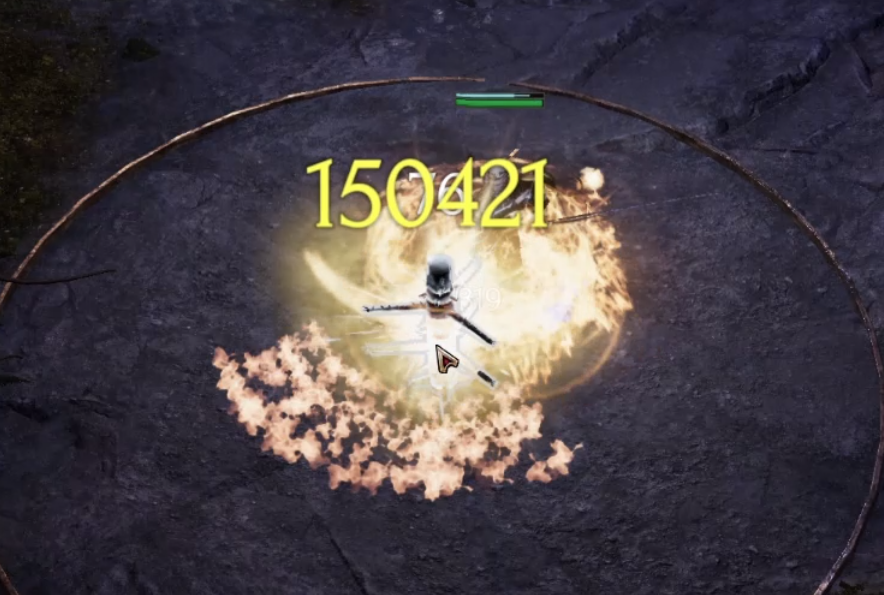 After a bit of testing, the buffs from Charring are applied to Flame Reave, and while Ardent Branding can increase the damage of the big hits by ~90% or so, it’s incredibly slow & feels quite painful…

Nice guide! well written, thanks for sharing and your time invested

An alternate way to do the build is to get the flame reave consumes stacks for ignites and go all in on ignite/dot. The consumes stacks for more damage (just before autocrit node) also applies to dots applied by the attack. The every 4th reave bonus damage also applies to dots caused by the attack. Reave returns for less damage on the return really clinches it as it applies ignites for both hits. With the stacks consumed for ignite and Reen that is 8 high power ignites per reave. Though I bet I can get that up to 12 or 14 with some select gearing.

It gets really crazy when you include enchant. Go down its fire path and you get the ability to consume all your existing ignites for triple their total damage. It leads to some pretty hilarious boss kills. I go into a boss fight. Do a couple rounds of stack > reave then hit enchant. Boom dead boss.

For idols the ignite chance isn’t the best choice. I’m already applying at least 3 per brand and more per reave. So ignite effect and ignite duration are multiplicative with those. Usually effect and duration come in at about half the value of chance to ignite on idols so they math out better. Also on one of them (the duration idols I believe) you can get the fire damage boosted by over 300 mana suffix.

I don’t get as big of crits but the ignites provide better sustained boss dps I think.

Yes, that does sound good.

TBH, that Incineration also works for ignites makes me hopeful that Charred is working as intended…

Yes, yes ty a written guide rather than watching some play on YT, a lot better to alt n tab too