Harvest, my favorite skill in the entire game and yet so boring!

So some people probably know me, some probably don’t.
Some know it some don’t, but Harvest is my favorite skill in the entire game. 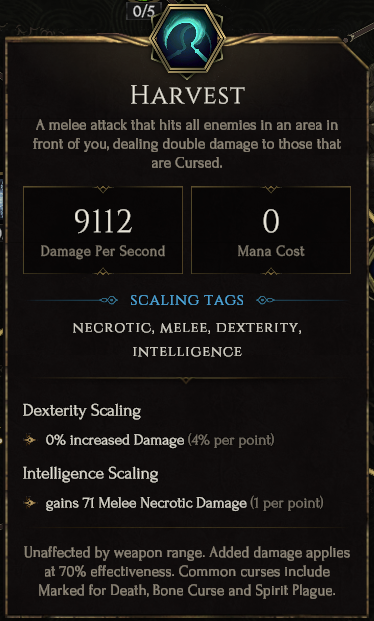 My strongest character utilizes it and it’s capable of doing really cool and diverse stuff.
I am doing 400-500 corruption Monolith with ease and I am without any trying hard, under the top 10 Acolyte for SC Arena(Place 6 at the time of this Post to be exact). If i would not despise Arena that much, I guess I could make it under the top 3 with ease, but since the current Arena feels like a lottery I won’t even bother.

It has one of the oldest skill tree currently ingame and is still one of the first (if not the first?) skill that required you to combo with another skill to use it to it’s fullest potential, namely cursing a target, before hitting it with Harvest, to deal double damage.

It has something for almost everything:

The only thing it does not offer, is variety in each of these branches, because depending on what you go, it’s very narrow in it’s applicable variety. Each branch is very small and you almost everytiem take the same stuff, depending on the fundamental buidl you are going for.

Today is the day, where I want to propose some stuff to make Harvest better.
I guess EHG wants to rework the skill spec tree entirely at some point, so probably most of my suggestiosn here will not make it into the skill spec tree, but hopefully I can give some inspiration.

First off, waht I like about Harvest and hopefully does not get changed: 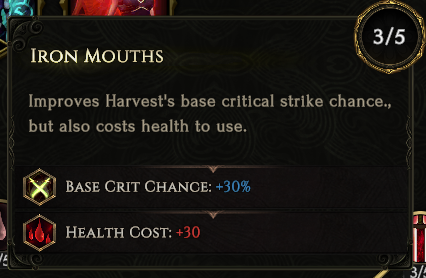 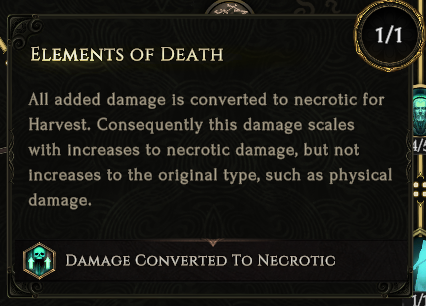 Fundamentelly what Harvest needs is: 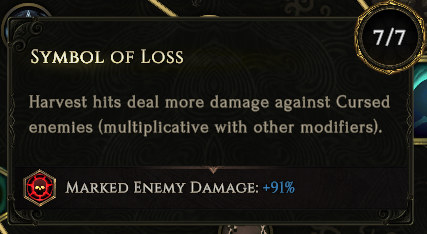 Symbol Of Loss: effectively the only true more multiplier in the entire tree, since the second one is a hybrid more multiplier that also effects minions and is quite useless for directly scalign Harvest’s damage.
This is a true point sink, which is very outaded for modern skill spec tree, spending 1/3 of your points into a single node is just not a good design.
Conditional modifiers are usually around 15-20% more damage/point, since Harvest already incentives cursing the Target, it’s also quite boring here, but still fitting.
Make it 0/3 with 20% more damage 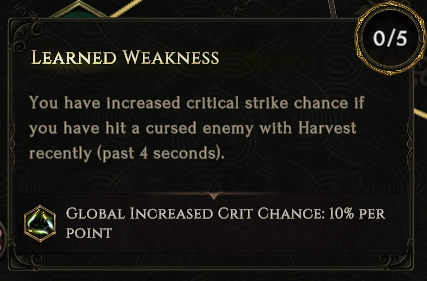 Learned Weakness: simply to weak, even for a global buff. I do like things that globally buff your character, to incentives combining it with other stuff, but also 5 point node is too much, change it to 0/2 or 0/3 with like 20-25% crit chance. 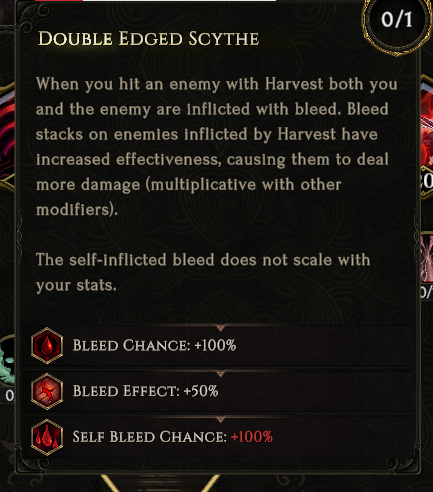 Double Edged-Scythe: One of the coolest nodes in the tree, as I already mentioned, I really do like trade-off nodes.
The following issue is not something related to Harvest, but a general itemization thing.
There is literally one single way- to coutneract self-bleed currently, which is one specific Item. (Namely Exsanguinous).
Acolyte has another source of self-bleed affliction; Spirit plague.
Giving us more options to play around that would certainly help with build variety, to utilize these nodes. Especially because Exsanguinous forces you into a very specific playstyle, making other playstyle not compatible with it. 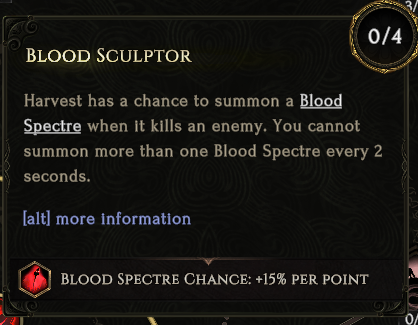 Blood Sculptor: Very cool node, if you wanna go the hybrid Self/Minion Damage Route, but when your builds heavily leans towards minions and you just want to support them, it makes this nodes very hard to use, since you actually need to deal the killing blow.
Change it so it’s enemies die within 1-2 seconds being damage by Harvest have a chance to summon a Blood Spectre.

Obviously all hard numbers provided here are subjectve to change for balancing and depending on the context they would be applied in.

All in all I want to wrap this up, by saying: Harvest is not in a bad spot right now, it just lacks the diversity other similar skills have.

Also, when Warlock will be released, I can’t wait for all the new curses and which build opportunities this might bring for any Harvest Build, since I assume Warlock will at least bring 1 or 2 new curses.

Also I did not suggest any minion related nodes, since I think I am not in a good spot to provide any minions related suggestions.

Thanks for anybody reading all of thise and I am eagerly to hear about how other people think about Harvest, since I know it’s a pretty unpopular skill.

First of all: What you said pretty much.

So I don’t want to go deep into “Do this and that!” but rather voice me feelings toward the skill.

Harvest is an effective skill, the build is brainnumbing easy to play and with all the leech Lich offeres very effective. For me it suffers the same problem Swipe has. The skill is okay but braindead. just hold it down and use another skill from time to time.

I like to play the harvest Lich because it’s on the “turn brain partly off” scaling of builds but then again I play WW Barb in D3 ^^.