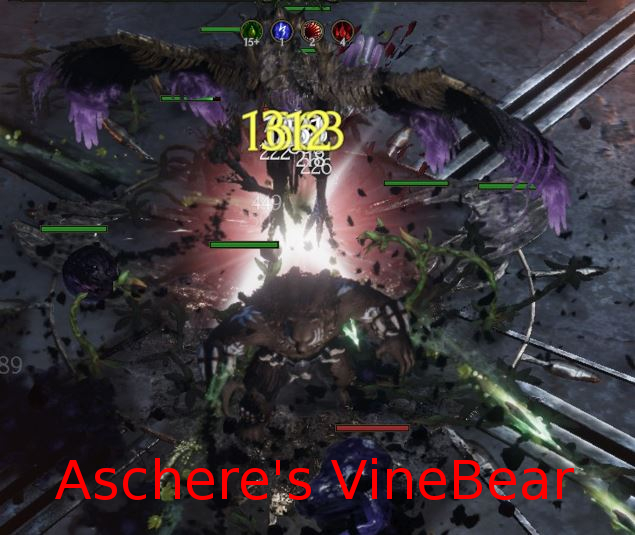 Introduction:
Have you wanted to play a minion build that doesn’t play like a traditional minion build? Have you wanted to speed clear/farm empowered monoliths on bad rare gear? Do you want to play as a bear with a lot of vines spitting thorns everywhere? Do you enjoy seeing a number spam of a million hits? If so, then you’ve come to the right place.

This is an extremely detailed build guide aimed at explaining everything about the build in particular for newer players.

The build leverages many interlocking mechanisms introduced in 0.8.4 with the druid rework. We will remain 100% of time in werebear form but generate our primary source of damage from twelve ranged vines and a single summoned Spriggan. We boost these vines and Spriggan up massively through numerous sources of flat added spell damage along with numerous multipliers. We also gain a substantial amount of secondary damage from the 200+ poisons on the targets. As a tertiary source of damage our own werebear attacks will still do low/mediocre damage.

Basic attack pattern is (1) attack with “Maul” which spawns/buffs all your minions and roots enemies (2) if needed use “Roar” to interrupt (3) immediately use “Rampage” to start charging to next pack and (4) Repeat on next pack. Rampage lets you move extremely fast through the map - get in the habit of just spawning vines and then charging away to improve clear speed. If single target just keep repeatedly using maul off cooldown while dodging hits in between. Weave in a Roar for an on-demand stun and damage buff for your Spriggan.

This build is very new player friendly as it doesn’t really require special gear. Garbage rares you find and throw a little crafting onto will more than carry you through empowered monoliths. There is only one required unique (Thorn Slinger belt) and two optional end-game uniques (Julra’s Obsession & Usurpers). Thorn Slinger is an incredibly common one that you’ll probably find one if you haven’t already; even without a Thorn Slinger a rare with life/resists works fine. The build itself is also very very forgiving to player mistakes.

The build is Hardcore friendly. I only died once between levels 1 and 96 and it was during leveling. Once the build was setup properly I have never died. The on-demand stun is really good for avoiding getting caught standing in something you shouldn’t.

Really looking forward to a monolith gameplay video and hopefully a lootfilter as it sounds like the exact kind of build I was looking for.

Your wish is my command :). Video added!

I’ll have to try this one out as well! I had a shaman vine build from 0.8.3 that was my absolute favorite build to play, but just doesn’t seem to kill anything anymore, which is a huge bummer. I’m excited to see another vine build that’ll work in the endgame!

One of the cons of the build you said is life recovery/sustain is a bit on the low side. Have you thought about going low life using exsanguinous/last step of the living and then taking the primalist passive to have another 25% less damage taken?

You certainly could go low-life with exsanguinous/last steps - i’ve been doing a lot of ward builds and wanted to mix things up some so I went health.

It’s a tradeoff as you’ll lose a lot of effective health as you lose that massive endurance threshold benefit and need to start looking for intelligence rolls on prefixes. You do pick up the additional -25% less damage though as you indicate. And it solve all your health recovery issues.

Without investing in intelligence rolls if I just slap exsang and last steps on my current build I’m at about 2.7K ward/150health which translates to about 6.5K effective HP (about a 30-40% reduction in total) so it’s certainly doable especially with more intelligence.

If you do go that way, i’d drop the 4 points in werebear for endurance and put them into 20% movespeed when rampaging. You could alternatively take some armor shred, but it won’t be very much.

I’d also take a point in Primal Medicine as your Spriggan will always benefit from the full potion amount.

Hmm, interesting decisions to be made then! I wonder what would be better vs the T4 Jarla boss, as it’s the only end game thing I’ve yet to take down.

@Aschere Just Curious, why the skills for buffing the healing aura on Summon Spriggan if you plan on being in bear form? I dont see anything that gives it use instead of being in human form and activating the skill. Im assuming I’m missing something but I’m not seeing it.

There are two “aura” skills that the Spriggan has: (1) Healing Aura and (2) Rejuvinating Wind. The healing aura is always active and applies to all allies (all vines, the spriggan himself, and player… i’m not sure on range but it hits offscreen so its pretty far). The rejuvinating wind is the “active” skill that replaces the summon hotkey. We won’t be using rejuvinating wind.

The two nodes we take (crit avoidance, crit chance, and flat spell damage) benefit the passive healing aura meaning they will always be effecting you and your minions.

Perfect! Trying the build out and you are correct. Glad I asked, digging it so far (I’m fairly noobish) Thanks!

Who would have thought, bears casting range vine.

Been enjoying the build in early echos. Probably a stupid question, but why are we looking for minion physical damage on weapon? I thought the vines only scaled off of spell damage, but maybe I am missing a detail/interaction somewhere? Thanks

The vines are casting “spirit thorns” which is physical spell damage. As such, “minion physical”, “minion spell”, “minion cast speed”, “attunement”, and generic “minion damage” all scale it.

We are also adding a ton of physical damage to them (+10 from tree, +50 from entangling roots, and a potential +15 adaptive from spriggan aura) which also gets scaled up. “Adaptive spell damage” adapts to take on the attribute type of the base damage (which is physical in this case).

I think the base vine damage is around 15 or 30 damage by comparison so the bulk of the damage is coming from what we’re adding to them.

Awesome, thx so much for the explanation

Just want to thank you for this awesome guide! The build really works like a charm and your guide is absolutely fabulous!

very very fun build to play! Loving the idea of adding the bear tankiness (and movement speed) to the classic vine spriggan build

question for you all: how much damage does the spriggan companion actually dish out? Would it make more sense to stack his healing aura rather than the damage since his damage doesn’t really make much of a difference? We can go the healing aura/dodge route and get a pretty healthy dose of dodge on top of extra defensive layering.

Spriggan is about 30K DPS from me fiddling around on practice dummy. So he’s got a decent chunk of your total DPS. He scales with every way we’re scaling the vines so he gets boosted quite a bit.

The problem I had with scaling the healing aura was its such a minuscule base amount. The “active” rejuvenating wind aura is a good amount of healing, but since we’re in werebear form we can’t activate it. 5/5 points in Aura of Life gives 200% aura healing which makes the heal 30health/sec. Assuming you have 200% minion healing effectiveness that is a final 90health/sec.

You could potentially take the “aura healing to minions” and avoiding having to get minion leech though which is really nice. If I did, i’d probably pick up one more point for all that dodge.

I’d probably only do it if you have a +2 helmet (which means you also need two +2 level prefixes on same helmet) and +1 minion staff. Drop 2 points in brutal mire and maybe a 3 points in floral ascendance. Then 5/5 in Aura of life and 1/4 in Aura of Loyalty and 1/1 in Aura of evasion (assuming you have decent base attunement). That’ll be about a 12K DPS loss, but give you and your spriggan better survivability.

just an advies, i useed this build …then i find a 2-handed axe named Usurper’s Mandate… this is helpful .