Oooooh. If you manage to land a legendary T5+ “minion spell damage” on that unique it would be insane for this build. It’ll give you a TON of life recovery. The flat health roll is really nice too.

This is a great build and the guide is very well written! Thanks a lot!

I was building a cold vine Spriggan Form build when i stumbled upon this thread. The gameplay is much smoother and more agile with the bear and the Spriggan Form - Entangling Roots Combo on Spriggan is just not good. Proccing ER and Vines with Maul is so much better and more fun for me.

I just committed to a cold build because I like the theme. But I’d really test this with a poison build some day as vines get so many hits out.

One thing I seemed to have missed: What’s the purpose of building minion physical damage on gear? Aren’t the vines poison? Or do they have also a physical component?

One thing I seemed to have missed: What’s the purpose of building minion physical damage on gear? Aren’t the vines poison? Or do they have also a physical component?

The ranged vines do base physical spell damage. They don’t work on the test dummy, but if you go out in the world (i like testing on “Radiant dunes” as it gives a constant stream of wraiths) and compare no weapon to a a weapon with +minion spell damage OR +minion physical damage the damage will go up with each of the weapons. The vines are casting “spirit thorns” which is physical spell damage. As such, “minion physical”, “minion spell”, “minion cast speed”, “attunement”, and generic “minion damage” all scale it. We are also adding a substantial amount of added physical damage (+10 from tree, +50 from entangling roots +15 from spriggan aura) which is also scaled. Your spriggan is also base physical damage as well.

just an advies, i useed this build …then i find a 2-handed axe named Usurper’s Mandate … this is helpful .

You are amazing for the idea. I had a 2 LP usurper’s lying around. Threw it in to make a legendary with T6 crit, a very high T5 minion spell roll, T5 armor shred, and T1 junk mod. I got super lucky (would have preferred the armor shred, but can’t be picky): 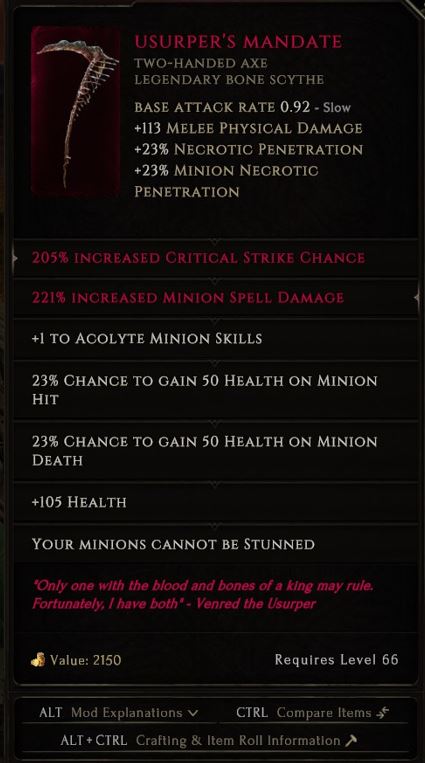 I’ve only run a single map but It’s soooooo good. When your vines die from resummoning they also count as “deaths” so you basically also get another 100-200 health each time you leap. Combine that with the default hits and its like an extra 400 health per second which is an insane addition. The life is also a big boost (about 250 total raw health). Highly recommend to anyone if they have a usurper’s w/ legendary sitting around. I’ll add something to guide.

Lastly, I updated the guide to include legendaries, more FAQs, and added the part on usurper’s to the gear section.

The ranged vines do base physical spell damage.

Yep, I forgot about that.

Hey there!
Awesome guide.
Can you explain what the diffrent colours of lootfilter means?
Im new to the game so im unsure about rarity and so on :o)

Can you explain what the diffrent colours of lootfilter means?

You can change the colors to whatever you want. It’s a personal preference color system (just go into loot filter and change the color if you want). The loot filter is on the stricter side, so you can always make it more broad (more basetypes/less tiers) if you’re starting out.

Thanks alot for the fast response :o)

Thank you for this awesome Guide! Haven’t played for ages, started picking it up a couple days back. Your Guide really helped and the build is alot of fun

I’m currently leveling and found Eterra's Path - Unique Brigandine Boots - Boots - Last Epoch Item Database
Do you think they are worth using? If so, also in Endgame? or am i better off crafting rare boots later?
Thanks in advance and for your work you put into this!

Eterra’s is an excellent pair of boots for leveling (life and movespeed), but you’ll want to ditch it for a pair of rare boots at endgame once you can craft a decent pair. You don’t actually want the summon effect late game (its ok early on). The reason is when you leap w/ entangling roots going off, it buffs the 6 vines that you just summoned. If you’re running around summoning guys you are basically summoning unbuffed vines.

So the skill specialisation order would be i assume to make it work and stronger over time:

You’ll want Spriggan Form, Werebear, and Fury Leap as your first three, just so the build will be functional. Entangling Roots requires 35 points in the Druid Mastery, so you won’t have that until later, probably around level 50 when you unlock the 5th specialization anyway. So by default the fourth specialization should probably be Summon Spriggan.

The problem with Great vine is twofold: (1) “Indirect casts only create a vine on third cast” meaning it takes 5-6 seconds to get a single vine and (2) the fact that “Garden of rage” triggers off the raw number of vines (so you max limit has dropped in half and it will be harder to actually summon them) making it hard to sustain rage (without investing more points in garden of rage).

So I don’t think it works with the trigger. Great vine I think is more for manual Spriggan form casting.

Yeah tried, can’t cast more than one GVine with maul =(

Really liking this build! I swap between this and LL EQ Werebear constantly.

If you try out the LL/Ward version of this build, do you find much difference in damage/survivability between that and the “normal” build you have in the build planner?

Just curious as I like ward (2k ward on my 80 Werebear atm), but just want to make sure I’m not hindering myself!

Might try asking @tenw30d on that question. I didn’t ever build it out on low life but i’m sure it would work just fine if you craft good enough gear. 2K ward seems a little on the low end for a low life version, you might want to make sure you have both exsang+last steps, intelligence, and some good vitality/life rolls (along with full inventory of life relics). I have about 3K ward without any intelligence on my gear by example and i’d probably shoot for at least 3.5K to feel comfortable.

@MattTheMan77 , I haven’t tried the low life version yet, but I do plan on it as soon as life gives me a little bit more time to play

Right now I’m running a slightly tweaked version of OP’s build, with a bit more focus on life regeneration due to a pretty nice pair of boots that dropped with a T6 flat life roll and my severe lack of double health idols. Since I’m regenerating more life, I tried to focus more on damage reduction as opposed to max life, to make the regen more valuable comparatively. I took “Overgrowth” in the Druid tree and “Primal Strength” in Beastmaster to give pretty much 100% uptime on Aspect of the Boar (along with an increased duration for Aspect of the Boar roll on my body armor). I’ll also grab “Berserker” in the Primalist tree once I get enough points. To make room for these nodes I haven’t taken the Shaman nodes or the Attunement/Crit Avoid node in the Druid tree.

I’m only level 82 right now, and just hit empowered mono’s, so the character still has a long way to go. One other thing I changed that I really liked was “The Chase” node on the Beastmaster tree, giving 32% attack/cast speed to minions, that seemed to increase clear quite a bit for me. Single target is a bit low, but I am still using the 1 hander and shield that dropped at like level 20…not a single minion staff with either of the minion damage rolls has dropped for me yet.

not a single minion staff with either of the minion damage rolls has dropped for me yet.

You might try expanding loot filter to other base types. Better to get double T5 suffix roll than on the right basetype.

Did a complete campaign playthrough today and i have to admit the boss damage is better than my usual zdps builds. I have some short video logs there including some campaign bosses and early normal Monolits/Dungeon.

The first ruined era i was mainly totems and staff Upheaval (for massive added cold damage) while crafting minion gear.

I switched at level 39 to VineBar, and before that i was mainly Spriggan form (with 1-2 wolves) casting vines manually and healing totem if needed.

I have barely any minion life and my Spriggan only died to Abomination because i didnt payed attention. He facetanked Lagon’s eye beam before.

My personal rating in comparison to my other 2 Werebear playthroughs: