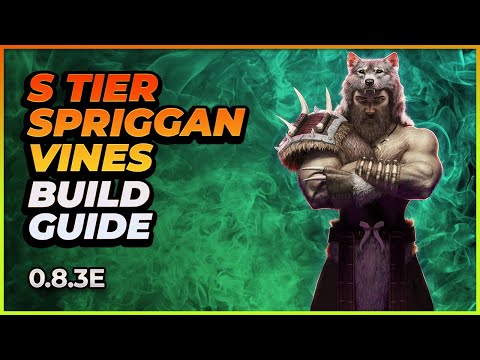 On the one hand, the devs mentioned that they were looking into ways for people to get permanent transforms. On the other hand, getting an S-tier build performance with only 3 skills is kinda nutty. It’s not a matter of if this build is going to be nerfed, but how.

My hope is that they only change the interaction between the mana gain from the totems and the healing totem picking up the thorn totem tree (likely by adding some sort of mana cost to it), so that the mana gain isn’t so brainless. Otherwise, people might think of ideas that end up killing the concept entirely, because I think the Healing Totems doing both healing and damage is a nice touch and shouldn’t be killed as a concept.

Vines look like they’re doing great damage. How does the Vale Blast portion of the tree compare to the Vines? I imagine the Root Wall + Ice Thorns completely lacks in comparison because Ice Thorns is simply a pointless skill in terms of being a good damage-dealer.

I havent tried building into vale blast in a long time. Did root wall and ice thorns not to long back and it was actually really good due to its taught and ability to apply tons of bleed/poison but its been a while. Need to try both maybe before druid changes.

Thanks for another grest build. I’m curently following one of your lich builds and me being new, made me enjoy the game right from the beggining. Keep it up

Avalanch Skill + Chance to cast Avalanche on Spell cast might be nice just to have 4 skills :D.

That would reduce the spell damage of vines and reduce your health (Survivability) to swap out idols for that and its unlikely the avalanche would would worth it for the damage. But yes you totally could!

that Shade didnt even know it was dead already…

Hey guys, for those of you who are currently druids and dont wanna reroll for build like this, I am finishing my Druid variant of the build. Planner in final form looks like this:

Main differences: as a druid, we getmuch more HP by percentage and that nice passive which gives us more endurance scaling with our max health. This means that this build can be extremely tanky - I managed to get it to theoretical 18k EHP against meele/close enemies and around 8.7k EHP against very high range enemies. Those ranged enemies are not really much problem tho, as they usually target your rootwall, pets, minions and such while you dance around other stuff. Also all this EHP is increased even more by Ice thorns procs.
Also we have some more healing effectiveness for us and our minions, paired with healing totems and spriggan healing aura making us very sustainable.

As for damage - druid doesnt have added flat spell damage as shaman does, meaning our direct damage potential and crit scaling is much worse - I decided to compensate by focusing on damage over time, abusing the fact that +minion damage increases even all dot damage for minions, giving them nice hybrid source of dps. So we are focusing on bleed and getting poison baseline. Vines SHOULD retain their poison base damage (hard to confirm), thorn totems are specced for poison damage and idols+chest+helmet give us about 2.50 or more bleed stacks per hit of vine, totem, wolf or spriggan.

Bleed stack with my setup lasts for 7 seconds and should do 48x6.2x1.75(thanks to bleed duration)=526 damage over its duration if my calculations are correct.
This with 1.32 attacks per second (and 1.5 with howl active) and average of 90 vines active (easily achievable with our 75 percent+cast speed), 6 totems, two wolves and spriggan (±100 minions) gets us to 100x2.5x2=±500 stacks per second. We reach max of 3500 stacks in 7 seconds. This leads to theoretical maximum bleed dps of 3500x500/7 = 250 000 damage per second - with ONLY bleed damage. Now account for vines damage (which is still considerable) and poison damage and your sustained dps is through the roof.

Granted, this damage requires ramping up, and in fact, almost all mobs die within 1 or 2 seconds anyway, but for those big endgame bosses this is truly one of the best dps I found out so far.

So in theory this variant should be quite a bit better for arena and high HP bosses, but is certainly worse for speedrunning, as you have much higher ramp up time, meaning that you sometimes have to retrace back to check for dropped items instead of just running and spamming, but hey thats curse of all dot builds…

as the spriggan guy of the game great guide for current spriggan. As a guy knows the spriggan rework coming all skills changes to come. this will no longer be relevant comes next patch FeelsBadMan

Youve already tested the mew spriggan skill tree or your sayimg since theres a druid rework you expect it to be changed?

the recent post and what devs said in my stream chat. not because i touched it. all the public info given has confirmed it

They said a while ago that both forms were getting a significant rework.

Yes but rework doesmt mean that vines wouldnt be possible. So while we know the forms are getting reworked doesmt necessarily confirm the build will die. Even though its very likely

well on baseline logic. necro minions got capped. follow logic suit so would vines. which is a massive damage nerf on that fact alone. resource no longer mana for transformations. so mana spamming and regen wont be same. could be better or could be worse. either way wont be to the extend we currently have now. not mention its keeping vines and root themes but given my interactions with devs about it through dev streams and general chat. I feel the skills themselves are mechanically changing. Which would lead to the gameplay effectively not being same therefore the build probably wont survive. I can go much deeper into this and go through quotes and videos and patch notes talks. but this is the general TLDR. I don’t state things until I look into it really hard and back with proof. But patch is not out ill never say with 100% certainty. but I’m pretty confident in my guess and speculation through info given publicly.

Wraiths say hi… As does the mana on Smite prefix.

We have no idea what’s going to happen. Maybe it’ll be ok, maybe it won’t.

We have no idea what’s going to happen. Maybe it’ll be ok, maybe it won’t.

Exactly why I responded. The original response here:

this will no longer be relevant comes next patch

He stated that the build WILL not survive so I was merely asking if he knew something I was unaware of by saying:

already tested the mew spriggan skill tree or your sayimg since theres a druid rework you expect it to be changed?

Hence the ? At the end. But in the end I get my answer here:

But patch is not out ill never say with 100% certainty. but I’m pretty

if maybe he knew something i didnt

Well I do know stuff. cause spriggan belt mike even said going get changed I already know its due to the mana stat. from there I can go beyond. but I wont

Tell me, just to taunt Boardman!