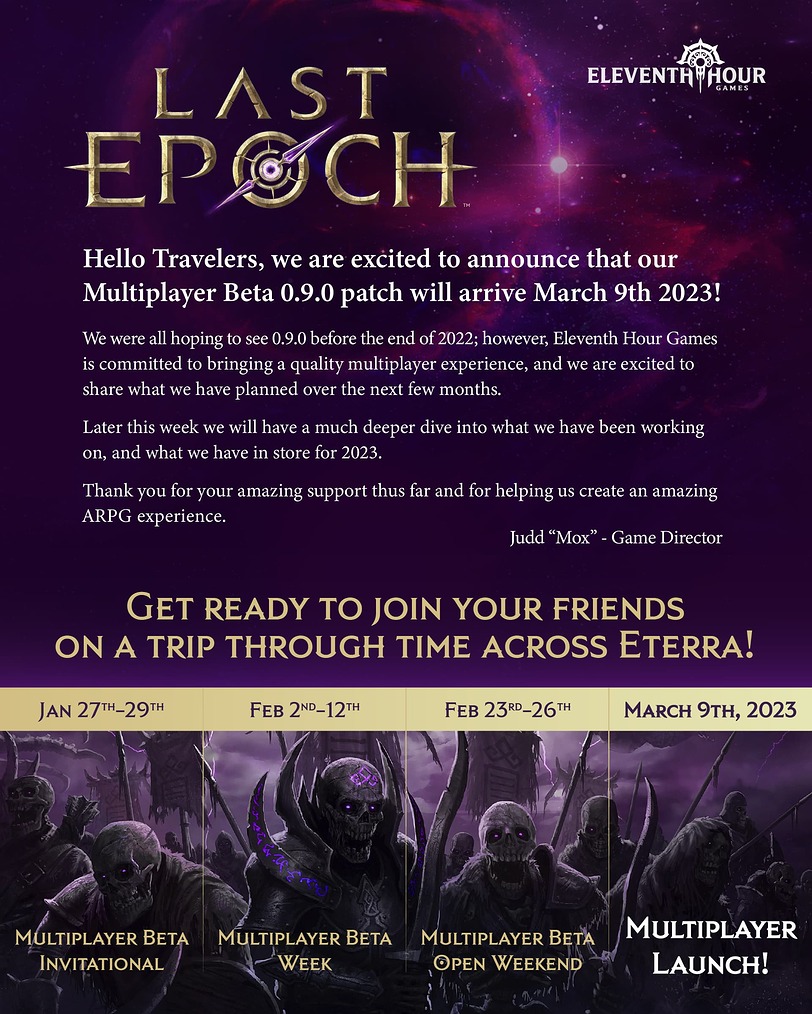 We have more details coming later this week that include a bit of a dive into what we have been working on, and where we are headed!

It’d probably be beneficial to include descriptions for each of these events so there’s no confusion amongst the community.

Yup. We have a full deep dive coming later in the week.

More importantly: we saw the winner of the reddit giveaway “name this mecha squid” but what was the actual name that won? What will it be called?

Sounds good, but I’m surprised you didn’t post the deep dive at the same time.

I see at least 2 for sure (probable) “stress tests” in there and I have to say that’s a wise move given other company’s attempts in the genre crash and burned without having that little bit of forethinking.

Regardless looking forward to what else is under the hood and despite launch almost being a year to date from 8.5, I’m still hyped.

Also, I’ve been lax on my Tempest Strike ribbing and can’t wait to start it anew.

Nice to longer have the “MP when?” question anymore with the answer “ready when its ready!”

Yes! Thanks yall! Keep up crushin’ it!

Wow, that’s a really long time with no patch for an EA game.

I’m a bit disappointed that we get the news this late. I doubt that the dev team just realised they need +3 months.

While I get all that “we want to deliver quality” stuff - and I’m all for it - I’m very disappointed. Not only personally, but also because I’d expect a lot of negativity.

And LE will stay “dead” for 3 additional months.

i agree with u @RawSuicide
thats makes it 12 months without a content update for a EA game, never seen that before and that makes me worried

Yeah its rough, I love EHG, but ive not been sold on the “wrap all the other content we have made up with MP to save on release stress”

There is lots of things we seen in the dev leaks thread, stuff I assume of which is coming with 0.9, lots of graphical updates and probably some skill updates for those skills as well(I hope???)

and it feels like at this point it would have been fine to have two patches, one every 6 months to atleast inject something into the game.

But im just glad its got a date. I really loved the druid patch and the 2-3 patches before that, they injected tons of content and quality content into the game so if 0.9 has skill updates for the stuff teased ill be really happy.

And if it launches as just MP then… i guess we will see how that goes. :X

Now that EHG knows that you two are really worried they’ll probably just release a content update by the end of the week and probably will push the launch of 0.9 up to January. I’ve heard they dread worried players the most!

All I hope is, that AFTER 0.9 the game will shfit gears again and will deliver 0.8.0-0.8.4 level of updates within 8-12 weeks with really meaningful content and features

Its a rough, but logical timeline and fits in with everything I expected of EHG - ready when its ready and not at the expense of the teams sanity and health.

I never counted the silly season as a productive month so its only really Jan & Feb as full months before 0.9 drops. I expect that its still going to be hard work and effort to make this happen. Realistically I didnt really expect an earlier time.

I’ll just have to find a few more RL projects to keep me entertained a little while longer.

Oh, I doubt that. That’s usually not what happens. Sorry I have to deliver that bad news to you.

Like me, i’m gonna renovate “gaming room” so things gonna keep me busy until march!

I’m a bit disappointed that we get the news this late. I doubt that the dev team just realized they need +3 months.

I was expecting a delay to happen and was ready for it but i am extremely disappointed how EHG handled this situation if they need till March for it to be ready then why leave it this late to announce the delay.

We have never gone 1 year without a patch and i guess that happens now.

It would be appreciated if the “deep dive” covers how trade will function.