Selecting a mastery class in Last Epoch is a big decision for your character. It defines several of your available skills, passives and items. Until now, the process by which you select your mastery class is simply pressing the ascend button once you reach enough of an investment in that mastery’s passive tree. The current implementation has a couple of issues including happening later in the campaign than we’d like it to, not feeling very impactful, and making players feel like they’ve made a mistake by not fully investing in a single passive tree to push up to the Mastery class unlock early on.

In order to fix these issues and make selecting a mastery feel more like a character-defining moment, we have some changes coming.

1. You will be able to select your mastery class when you complete a quest that you will receive when you first arrive at the End of Time.

This has the major advantage of unlinking the timing of mastering with your level. Mastering happens at a specific point in the story and not relative to your level. This means that mastering can happen significantly earlier. It gives you enough time to sample the different options as the base class but you will spend much more time as the mastery class. We did consider simply moving the mastery unlock down lower in the passive tree but this causes several other problems with build diversity and late-game multi-classing. It would result in the nodes near the bottom of the passive trees needing to be more generic than they already are.

2. Mastering will give you unique class-themed passives and skill associated with that mastery. 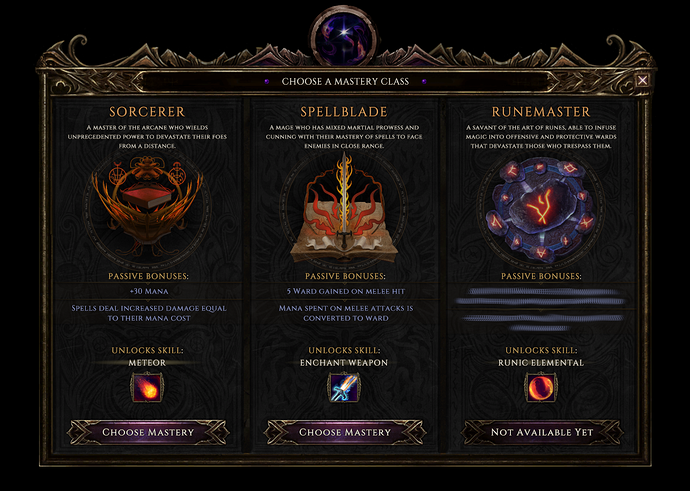 (This panel is still a work in progress. The skills and bonuses granted are subject to change.)

Currently, mastering is kind of a “meh” moment. Mastering gets you closer to a new skill and you get closer to new passives, but that’s about it. After this update, you will receive a powerful, class defining passive and an awesome unique class skill. While this skill is not mandatory to use, it will be very flavorful and generally useful for most builds. For example, when the Rogue is available, the Falconer mastery class will get the skill Falcon. It is a very key component to the mastery that we don’t want to give to the Marksman or Bladedancer. Previously, the only way to do this was to lock it way up near the top of the tree. Since the Falcon is such a key piece of the Falconer kit, we didn’t want players to need to wait so long to get it. We also want to allow nodes in other Falconer skills to be able to interact with the Falcon itself. Typically, if a skill tree interacts with another skill, you need to already have that other skill available. For example, Flame Reave, which can interact with Fireball, is unlocked after Fireball.

3. Mastering is more than a passive.

Your class mastery is a major piece of your character. Picking which mastery you want to be is more similar to selecting your base class than investing in a passive point. Decoupling your mastery decision from the passive system will make it more clear that this is not a passive point that can be respec’d.

While mastering has the biggest impact on the Passive Tree, it also impacts other aspects of the game, some of which aren’t implemented yet. Overall, this change will help to decouple the mastery and passive systems and make choosing your mastery much more exciting.

This is a huge, strict, 100% improvement to the system. No criticisms here: This is the right call and a good direction for the Mastery transition to take.

This looks really cool, can’t wait to see the other masteries passives !

Are these guys mind readers or something? Seriously!

This sounds really nice, so crazy question. Is this going to cause a global reset to all characters to reflect this new mastery or maybe a wipe?

We aren’t planning a total character wipe. We haven’t nailed down exactly how this will affect existing characters.

I love the idea of having stronger character identity/flavour and this looks like it will unlock a ton of potential builds/playstyles. As an altaholic, this is great news.

Looking forward to seeing all the mastery bonuses
and special skills. This all sounds great!

This is how I thought mastery class should be done all along! Good call!

This is how I thought mastery class should be done all along! Good call!

Agreed. This is how I wanted them to be.

and more rewarding i hop

Are these guys mind readers or something? Seriously!

They are players too it’s why they are so stronk

This looks really great. Where does this fall in the release schedule?

Absolutely amazing updates, cannot wait to see how this gets implemented within all the classes and hope it makes each one feel entirely unique. My only complaint was that builds didn’t feel like there was a real catch to them or a real defining turning point for them and this sounds like it will totally fix that issue. You guys are awesome devs keep up the great work.

Im not sure if this is a thing already but maybe adding a small tweak to the characters model depending on which mastery you picked would be great. For example: The Sorcerer gets a magic book on its belt and a few scrolls every ten levels or so, the spellblade gets a shoulderplate and a bit more plating while leveling, the Runemaster gets some runic symbols on his clothes and even more in higher levels. Those little additions could be tweaked with MTX.