A collaboration of exceptionally talented musicians and vocalists has brought a new main theme to Last Epoch in the Eternal Legends Update. One of the unique elements of this track is that it is sung in Old Norse. Today our composer shares some insights into how such a project comes about and a few details about the lyrics themselves. 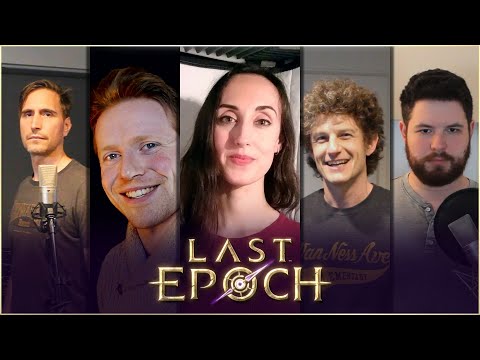 This is the main theme for Last Epoch presented with vocalists singing in Old Norse. The language has an ancient and mysterious sound, it fits the world of Last Epoch very well. The theme will be woven throughout the game soundtrack in different settings, most often as an instrumental piece, which will give it a more noble quality.

The music starts off a rhythm that is played on the tagelharpa, supported by the cello and percussion, including the djembe. The tagelharpa is a folk instrument from Scandinavia that has 3 strings, and a rectangular boxlike shape, it is played with a bow. The tagelharpa strings are thick and look like twine, the bow requires ample amounts of rosin to make them speak. On the long notes, it sounds ancient and creaky, almost like an old door opening. On the fast, percussive hits, it has a scratchy, piercing mid range. The cello plays open string chords for the big hits to fill out the bottom end. Open strings are where the player doesn’t use their left hand to finger a note, it’s just the full length of the string by itself. Notes on an open string have a much more primitive sound, there’s no vibrato to make it sound more refined. So the cello playing open strings with the tagelharpa and the djembe together gives it that unique sound, which will become a characteristic sound of the game. Later, the vocalists chant “Fyoern Ooeld” on top of the big impact hits. In Old Norse this means, “Ancient Era,” the name of one of the Eras of the game.

After the percussive intro, the melodic part of the theme begins. It starts with a male choir singing lyrics about creatures coming from the void that bring desolation and death. The orchestra enters, and it supports the folk instruments and vocalists. After the main theme is sung, the percussive part comes in again. Then we feature the vocalists singing a variation of the theme in a more exposed setting. A contrasting lyrical section follows; it is more moody, with a spotlight on the female vocalist. The piece concludes with a reprisal of the second half of the main theme sung very aggressively with the orchestra in full force.

We were fortunate to have an amazing cast of vocalists, from Northern Wales, Northern Ireland, and Los Angeles to bring their formidable talents to this project.

You can download the instrumental version of the song. If you’re feeling creative and want to remix it, individual audio stems are also available here.

Absolutely spectacular. I love this

Super caught me by surprise at how awesome that is.

At first “hearing” I was surprised and a bit reluctant, but this piece is really great!
And it’s nice to have all these background elements!

I just fell in love.

Now i wont be able to start the game without letting it finish! This will seriously effect how long it takes me to get to the next timeline echo

Music devs rock! Thank you for all your hard work guys!

i love Colm McGuiness. Not sure when i started listen to his covers and originals but he has amazing range as a vocalist.

Can’t get enough of this. You guys made some awesome music here. Chills. And that’s not covid. It’s from the theme.

The theme will be woven throughout the game soundtrack in different settings, most often as an instrumental piece, which will give it a more noble quality.

Hey you vocalists… you make the piece less noble :D.

Made my day :D. Nice musical piece thou.

Just in case I wanna play a bit with remixing the instrumental version: Is there a source I can find the bpm and/or the chords? Would make things a bit easier

All the scores are attached at the stems. Also the bpm.

Oh, I see. Haven’t downloaded the stems, yet.

Could we get an English translation for the lyrics, please?
Thanks for the downloads! Very generous!

“Listened while chopping firewood, mistakenly made a longboat and invaded England”…

The theme will be woven throughout the game soundtrack in different settings, most often as an instrumental piece, which will give it a more noble quality.

Interesting. I dont think i noticed it yet ingame. Any special eras / locations to find the instrumental version of the Main Theme?