Recorded a video for reference as this one is a bit detailed to explain: 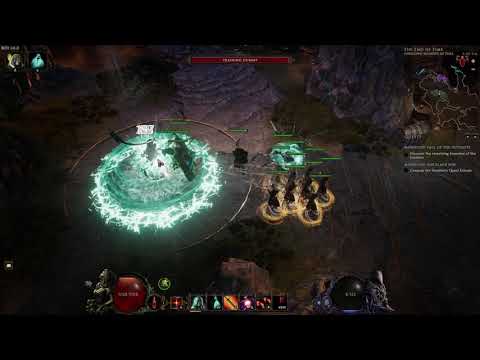 Illusion of pain makes it so the curse will fall off after it takes a single hit so long as you directly apply it. Crimson enlightenment will make it cast rip blood on any target after bone cure falls off. Cursed Limbs will make it so you continuously reapply bone curse on hit for X seconds, and will overwrite any existing bone curses on targets.
If you manually cast bone curse and then hit that target during the cursed limbs window, the bone curse from limbs will overwrite the one you cast manually and prevent the 1 hit cap from illusion of pain occuring - great working as intended. However, if a minion hits it, it will trigger the fall off from illusion of pain, cast the rip blood from Crimson Enlightenment, and reapply bone curse while under the cursed limbs window (hence the rip blood chain as seen in the video).

https://steamuserimages-a.akamaihd.net/ugc/1698381418672976593/791A67920772AB830245A4607218F2241A6BB02E/ The nodes in question are Cursed Limbs, Crimson Enlightenment, and Illusion of Pain (although Acute Infliction likely has the same issue). Crimson Enlightenment works as expected when the player only has Illusion of Pain (or AI), when the hit count is depleted, Bone Curse ends and Rip Blood is cast. When Cursed Limbs is thrown into the mix it acquires some odd behavior if the player is the …

Issue is pertinent to action resolution with minions. Technically not a bug but unethical gameplay loop. More information here:

I would say it is based on the way ailments are checked resp. resolved. A Player hit during Limbs applies a new curse and thus replaces the oldest when the limit of ailments is reached (here limit of course is 1). A minion hit in difference is his own action. After the hit ailments are resolved and removed thus triggering Rip Blood. Here are my notes and observations on this ionteraction: Assumptions Bone Curse: Default Duration 8s Tracks hits if Acute Infliction or Illusion of Pain is sele…

Can we get a short comment if this interaction is working as intended or probably going to be changed?