Hello! My name is Reformed Donut, welcome to my Bladedancer guide for 0.8.1c. I stream semi-regularly on Twitch at Twitch.tv/ReformedDonut. Bladedancer is by far my favorite class because of its raw damage output, survivability, and mobility. I strongly believe that Bladedancer is one of the easiest classes to play for any new player, and a class that anyone can have fun with. Below I will outline the build that I used to reach rank 3 on the HC Solo ladder this patch, since the death of that character it has dropped to rank 5 at the time of writing.

OVERVIEW
This build takes Shadow Cascade and Bladedancer turning them into a hardcore viable critical strike machine that can clear wave 200+ in arena with gear close to the endgame setup below. Further into the guide you can find completed skill trees, passive trees, and links to 4 different LE planners to help gear your character and level your skills correctly as you go.

Shadow Cascade is the bread and butter of this build, with every other skill being built around enhancing its affects. Using this skill, either manually or through using Shift, will cause all of your shadows to repeat the skill, enabling you to hit extremely hard, extremely quickly, with Smoke Bomb and Synchronized Strike being used, you will be able to consistently one shot echo bosses, and dismantle timeline bosses in a matter of minutes. Our Shadow Cascade tree sacrifices attack speed for raw damage scaling, and crit chance/multi enabling us to hit over 50k crits without perfect gear. 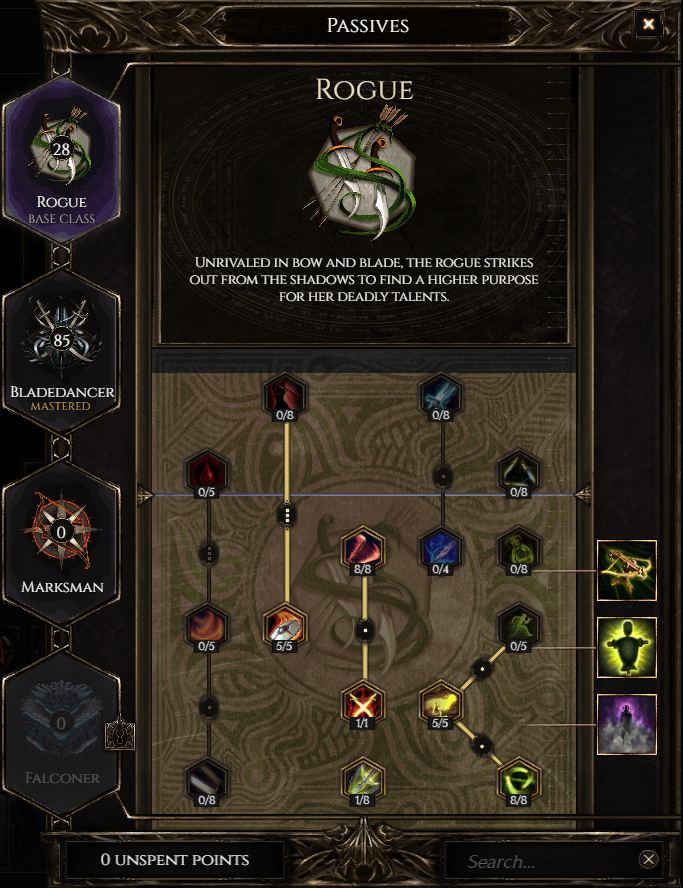 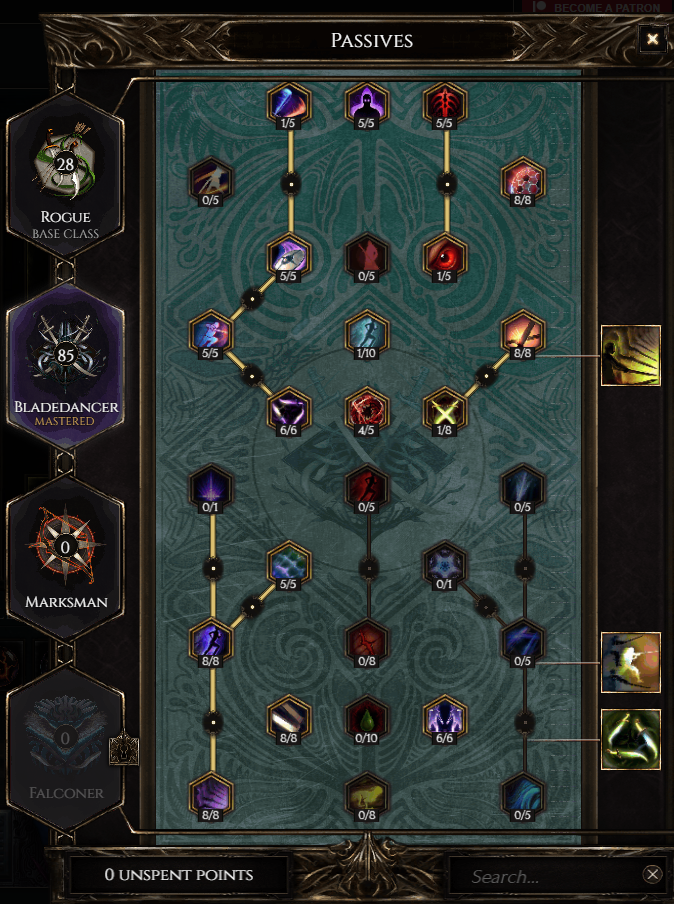 Without going extremely in depth about the passive trees, we prioritize grabbing all of the Glancing blow chance available to us. Along with shadow damage, crit, and dodge rating that we need to scale our defense and offense through the roof.

GAMEPLAY
Unfortunately I do not have recorded videos or a YouTube video to attach to this post, I can say that 99% of gameplay is just shifting toward your echo objective and using synchronized strike with a manual shadow cascade or another shift activation whenever something crosses your path. This build feels really fluid and very tanky once you have your necessary damage and glancing blow chance, dodge rating will only further increase your survival and through the passive tree you will gain massive damage bonuses while on full life.

These five links will provide skill and passive trees, along with some optional gear recommendations for each link. Use and edit these as you see fit.

Loot Filter
message (2).txt (9.7 KB)
This is a 10kb txt file which has the editable loot filter for this build. Enjoy!

Ending Note
Thank you to anyone who made it this far, I am aware that this post is poorly formatted when compared to others on this site, and has a lot of text bricks. This was thrown together very abruptly at the request of some viewers from stream. I plan on making more guides in the future, that are hopefully better put together than this one. If you have questions about the build either reply to this post, drop a question in my twitch chat, or in the discord at https://discord.gg/C4QyuWfngM. (discord can also be gotten through twitch). Thank you again for checking out my build guide, I stream at Twitch.tv/ReformedDonut thanks for the support!

Hello, thanks for the build!
I’m new and have a few questions, would appreciate if you could help:

Hi Shalash thanks for checking out the build! To answer your questions one at a time…

So in short - Dancing strikes not needed cause of mana sustain.

I hope this answered your questions, this info is useful for anyone using this build so don’t be afraid to read it all. If you have any more questions feel free to ask away. If you haven’t joined the discord I would recommend it, or stop by a stream to see the build or something similar in action. Thanks again for your interest in my build, I hope these answers were satisfactory to what you were looking for. Have a good one -Donut

Hello! Have u create a FIlter for this build ?

Yes, there is a loot filter attached in the post above it is the downloadable text file. Download the file and copy all to your clipboard, when looking at the filter screen in Last Epoch there should be an option to import from clipboard and it will auto make the filter for you. Hope that answered your question, sorry for the extremely late response. -Donut

This is a great looking build, thank you for putting it together

I tried copy pasting the lootfilter, but it makes my game go into crazy buggy mode, not sure what’s up with that. Tried to replicate it myself and that works well enough, but I can’t recreate the Affix based highlight (for use or shattering?), any chance you could tell me which ones you’re looking for?

Hi Badbare1,
Glad to hear you liked the build! The 100% crit avoidance on the mix max gear was something I overlooked while making all of the guides. Replacing the hybrid health roll with Crit avoidance is totally fine! Feel free to make whatever changes you want, a lot of your end game gear decisions will come down to personal preference or what you can find. Another option is if your resists are high enough or you’re okay with losing some, is replacing the all resistances reign of dragons blessing for the critical strike avoidance one. Thanks again for viewing the build!

Hey Lyrok, glad you enjoyed the build!
I haven’t had anyone message me about that issue before, my guess is the link might have expired or something with regards to the loot filter. The way I do my filters is separating the mods into colors based on what they do. One color for damage, one for resists, one for critical based mods. Once you run a filter like that you have an idea of the mods on the the item when it drops, before you look at it so you can spend less time sifting through the loot puddles.
I hope that answered your question! If not or if you have any more feel free to message me at anytime!
-Sethery/ReformedDonut

I tried copy pasting the lootfilter, but it makes my game go into crazy buggy mode, not sure what’s up with that.

I had the same issue when trying to copy the content of an XML file. Rename it to .txt, open it and then copy the content, it should work fine.
Or even better: download the XML file and copy it in the loot filter folder.

Hi! Great guide, you can see that a lot of effort went into it.

I am planning to play something like this and I wonder: I’ve been looking at Boarman’s version and he is speccing the dagger nodes on Shadow Cascade and you don’t. Can you explain please?

Glad to hear there was a fix for this!
Thanks for your help with fixing this!
-Sethery/ReformedDonut

Hi Cocomoloco,
Glad to hear you liked the build, and I appreciate the compliments! As for your question Boardman’s build is set up to apply the “Shadow Dagger” debuff through his choice of skills. The top right section of the Shadow Cascade tree is meant for shadow daggers. As is the bottom left of the Smoke Bomb tree, and the top right of the shift tree. The way shadow daggers works is once you apply 4 stacks it consumes the debuff to deal a large damage nuke that is guaranteed to critical. With the “Increased shadow dagger effect” affix on the Helmet and Body Armor slot, along with the 1x3 Large Idols you can reduce the number of hits needed to trigger this effect down to 3, 2, or 1. (To get it to 1 you need 250% effect requiring a T6 or T7 roll on either your body armor or helmet.

The reason we don’t take those nodes on this build is because I personally do not enjoy playing Shadow Daggers. Compared to my build above I find that Shadow Daggers builds are much slower than this build, and limit the rouges massive amount of mobility. Again this is my opinion, I encourage you to try out both and pick whatever you want.

In short, Boardman’s build is set up so that the activation of Shadow Cascade is doing very little damage. However, through the shadow dagger debuff he applies he is able to output lots of damage. With this build your damage is frontloaded into the actual activation or hit of shadow daggers causing your damage to be much more immediate.

I know this was a very long winded answer, hopefully it was able to answer your question. If you have any other questions feel free to message me or reply to this!

Thanks again for checking out my build! -Sethery/ReformedDonut

yo I gotta say the amount of time and effort you put into these answers is truly staggering. you rarely see people so dedicated and passionate within gaming communities. I’m super new here but I am definitely liking what I see!

Thanks Cocomoloco!
Making sure people understand stuff they have questions about is just part of the guide

. I’m not streaming at all right now, but once the next big update drops i’m gonna be playing a lot more. Feel free to drop by whenever and say hi.
Glad you’re enjoying the build guide! -Sethery/ReformedDonut

Hi just wanted to say thank you so much for your guide . As a new player this guide have been fantastic and the game-play is so satisfying.
Take care

Hi Musty34.
Glad to hear the build is feeling good! If you have any questions feel free to drop them below!

Hi and thanks for the build, will it still be good after tomorrow’s patch? TIA

Hi Pale_Rider thanks for checking out the build!
I just finished reading over the patch notes and the build remains unchanged, nothing that we use at all got touched even a little bit. If anything id say the build got a microscopic buff due to the 4 extra idol slots. Other than that nothing has changed, I think this build will excel into Orobyss because of its high mobility and dodge chance. I am going to make a slightly different version of this build for the new update and will be streaming it tomorrow when the update goes live. Feel free to drop by!
-Sethery/ReformedDonut