When we get a new Warpath upgrade?
Atm you only can play Warpath while leveling, after it its garbage. Even with good Gear you hit like a wet noodle, and thats absolut stupid. There are Sentinel Builds that makes a ton of dps ( Manifest Armor/Smite/Bleed or Void builds ) but a normal Warpath Build without any Spells/Ailments isnt playable. I understand that the Dev Team doenst like spin to win, but Manifest Armor or Smite/Devouring Orb are the same way to play like spin to win. You press 1 button and melt everything, but playing Warpath with 1 button you melt nothing in late game. Physical Damage deals 0 dps on Warpath and this is sad.
I Geared my Forge Guard asap to show you what Gear i have on him and what kind of Dps i do.
My Gear for Demostation Forge Guard, Level 87 (LE Beta 0.8.4e) - Last Epoch Build Planner
My Damage with it 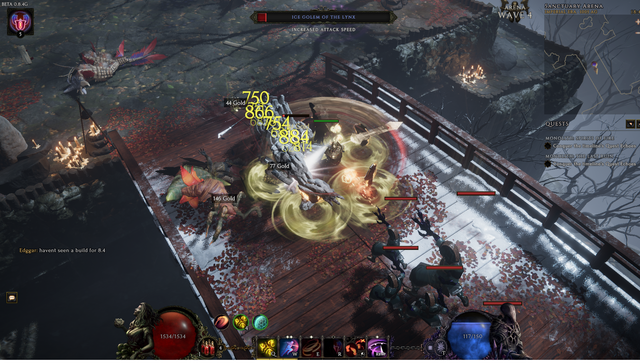 I mean thats a joke isnt it?
Thats Arena wave 4, on higher lvl i can run away cause i dont deal any dps

No srsly, i think you have to do something to make a Phys Crit build playable. I dont wanna make 20k Crits, but this is …

Atm you only can play Warpath while leveling, after it its garbage.

I strongly disagree. I personally don’t like Warpath in the context of “1-button” builds, where you solely use warpath all the time, but even that is viable.

But there are also a lot of other cool interactiosn totally viable with Giant Splitter’s Spin-Stop-Spin playstyle.

I understand that the Dev Team doenst like spin to win

That is not true at all, they just very recently overhauled Warpath and made tons of cool Nodes and interactions.

I cannot comment much on pure physical warpath, but from the looks of it you invested half of your points into mana management and area and only took two nodes that directly boosts your damage.

Warpath has one of the most busted nodes in the entire game (which I think actually needs to get nerfed), which is “Maw Of The Deep”, it’s even worth scaling that as a non-void knight.

You did not spec into armour shred in warpath and only have a very small amount on idols and nothing on gear.

Armour shred is easily the single most strongest stat for any hit-based build.

You also do not have any physical resistance shred

Overall I would agree that warpath could need a few more generic damage nodes and maybe some nodes that specificaly interact with a pure physical variation (currently there is only one with the Mace Physical Pen, which is odubling down on weapon type AND damage type)

I mean thats a joke isnt it?
Thats Arena wave 4, on higher lvl i can run away cause i dont deal any dps

No srsly, i think you have to do something to make a Phys Crit build playable. I dont wanna make 20k Crits, but this is …

All I can say is, that hit-based warpath (especially void knight/void) is borderline busted.

I understand that the Dev Team doenst like spin to win

Did you ever play that Maw of the Deep talent? If so you would see that makes only a small difference, i would hit for maybe 1,5, change stuff …
You need to invest points in mana managment, if you want to have another spell you wanna use.
I only play Sentinel and i can tell you that Shred is the worst dps stat you can have. I would never recommend that stat.
Did you ever saw any other Sentinel Builds compare too Warpath?
Manifest Armor Build MA - YouTube did you see how it hits on t4 Julra?
Hammerdin Build with Smite Turbo Smite Hammer Throw Void Knight Last Epoch Build Guide Patch 8.4 Best Autobomber Build - YouTube
or the Devouring Orb builds, Auto Bomber
Warpath never reach these Numbers no matter what kind of build you play with it.
Ad a Talent that makes you oom in 4 sec to deal more damage is only a joke as a Whirlwind player. You wont Spin and than chill 5 sec to regenerate mana. Its an Hacknslay game not wow

While I’m not saying you’re wrong, you’ve not exactly helped yourself by going the lowest DPS Sentinel mastery.

The ForgeGuard tree seems for me legit to deal a good amount of Physical Damage…
But yeah the only good stuff in this tree is Ring of Shields, sad

Did you ever play that Maw of the Deep talent? If so you would see that makes only a small difference, i would hit for maybe 1,5, change stuff …

Yes I did. You don’t even need to reach 12 stacks of time rot to make it worth.

It’s the single strongest skill node in the entire game from a point/effeciency perspective.

60% more dmg per point without any drawback up to 3 points.

As I already mentioned it is literally 180% more dmg, if you are able to stack 12 stacks of time rot.

As a Forge Guard you will have a harder time getting 12 stacks, but you don’t need 12 stacks to make it pay off already.

I only play Sentinel and i can tell you that Shred is the worst dps stat you can have. I would never recommend that stat.

That is objectively not true

Shred (both Resistance and Armour) are more multipliers and it definitely does vary “how” good it is, depending on how reliably you can apply it.

Especially Armour Shred has a very high impact with minimal investment.
On your build you only have 80% from idols, which is not a lot.

Did you ever saw any other Sentinel Builds compare too Warpath?

Nit picking some very well thought out and optimised builds vs. a midgame equipped character is completely unreasonable.

Yes, you might not be able to get a pure physical warpath to that level of damage on a FG.

But I can tell you for sure, that there are ways to make warpath melt bosses as well.

Try, experiment, test. That’s what ARPG’s are all about.

I do dislike sharing fully fleshed out builds.
I already did share some things that would definitely increase your damage substantially, now its your part to implement these in your builds.

Its not about getting THE BUILD done, there are so many different things you can combine.

And from your example you posted and what you said, I am 100% convinced, that you did not use all the tools that are at your disposal yet.

Once you have a better grasp of some of those mechanics you might be able to combine them more efficiently and all of the sudden you will be able to do THE BUILD.

In games like this (especially even bigger ones), there are always a lot of very “famous” or well known builds, due to content creators etc. but that doesn’t mean there aren’t any other good builds.

If you want to be able to do T4 Julra within a few seconds, you definitely need to use all the tools LE has to offer.
But if that is your “goal”, you also might get disappointed, because that’s a high threshold for a build, if you only call those builds successful or good.

I have 768 hours in this game with only playing Sentinel and i can tell you that i tryed much builds.
I don’t wanna argue so its ok for me

EDIT TO THIS POST: I have no information as to the validity of the video posted here and it has been suggested that the min/maxed build MAY not be possible to obtain in game without resorting to less than honourable means. If this is the case, then this post should definitely be ignored as a valid argument that Warpath is viable - I would refer instead fo McFluffins build below instead…

Late to the party here… 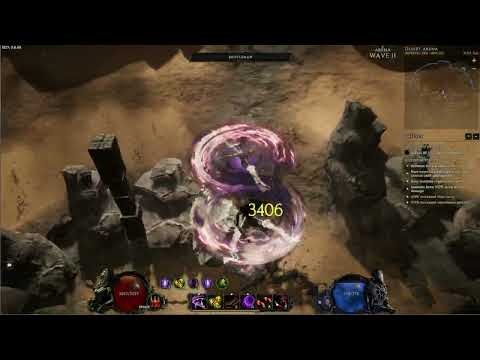 While this is a min/maxed build and an outlier, Warpath is most definitely viable for endgame… I have random messing around builds that easily handle 200 corruption levels…

One thing I will say, is that Warpath is a playstyle that is not always everyones cup of tea…

I saw that video yesterday also, but hes only doing high corruption runs, not a boss run.
Clearing waves of mobs isnt the same like killing a Boss

What is the Shade exactly?

Some kind of a big trash mob

Trivial enough for you to do on your Forge Guard then.

Its way easier to play against Orobyss than against Julra

Well, those are Mono bosses… He didnt show Julra but I would say defeating Orobyss at 700 corruption must be pretty damn hard especially considering Julra just requires understanding the mechanics and having patience to defeat her at lvl 100 with 450% odd increase depending on the dungeon modifiers…

but hey… I dont need to convince you Warpath can work, but your “Atm you only can play Warpath while leveling, after it its garbage” is just plain wrong…

a normal Warpath Build without any Spells/Ailments isnt playable

That’s the part I’m wondering about.
I know, from my characters, that Warpath is good. But “vanilla” Warpath? That’s something I have been thinking about for a while: we always see Bleed WP, Ignite WP, Echoing WP, etc… but I don’t remember seeing a pure “in your face” Warpath.
Personnaly I don’t need that, I like Warpath as a core skill with dependencies, but I’m curious.