Ward based bladedancer for 8.4?

So I’m trying out my first rogue/bladedancer and I’m having a blast with umbral blades. I’m trying to figure out how to go about creating a few layers of defense, and I’m not sure the best way to go.

My first instinct was to stack glancing blow, so i’ve got passive points in that and a few ways to generate dusk shroud, but it’s not as high as I would like.

I’m using shuriken’s blade barrier to buff my armor and shred armor & resistances from nearby mobs, and using shift to buff my dodge rating and (I think) restore hp/mana.

This puts me in a weird situation though. I can either use the shadows generated by smoke bomb for more damage by using them to shoot umbral blades (sword thrower + the fire explosion) or I can use them to generate ward by having synchronized strike consume them and generate a bit of ward. I’m not sure which is the better option. I’m also not sure what the maximum number of shadows is by default…I could probably manage them better if I knew.

I don’t think I have any uniques yet that help with ward generation or retention, but the idea of building a defense based around ward seems pretty solid, and I’m wondering if that’s possible in a build around Umbral blades…if not, I may be willing to try a different main skill just to experiment.

Most of the guides i’ve seen that mention ward as a primary defense are from 8.3, and some mentioned changes that make the build(s) nonviable, so I figured i’d start a new thread and hope someone has better ideas than me.

Step 1: Generate a lot of shadows all the time
Step 2: add Affix " Ward Gained When You Create a Shadow " to your gear.

That’s literally all you need.

I’ve only just started seeing this affix, and the number seems quite low. I wasn’t sure if it was possible to get ward high enough with this to make it a primary form of defense (and make it worth losing other things like resist/life/dodge).

The key is, that this usage doesn’t let you just walk around with a lot of ward all the time like a Spellblade does, or a low-life Ward Lich does.

It generates spurts of Ward which rapidly dissipates. But that’s OK. Because you’re generating it as you attack/enter combat, and it lives just long enough to absorb the hits you’re taking. The fact that you drop to 0 ward between packs of monsters isn’t really relevant.

Ward will never be your primary defense layer as a Rogue, because you simply lack the means to have enough Ward retention to generated thousands of Ward.

But if you combine it with some other good DR, like GB and Dodge you get a very good and consistent ward generation, that will give you a lot of mitigation for lots of small incoming hits.

But you are still very vulnerable to big chunky hits from bosses and certain mob types, if you receive a hit that deals a couple of hundred/thousand damage and both GB and Dodge fails it will go straight through your ward.

One more thing to note here is, that you can play a build that does not even utilize all the shadows generated, but if you create multiple shadows per second, your “Ward per shadow created” literlly turns into ward/second.

Once you start thinking in “Shadows created per second” you see some nodes in a different light.
Smoke Bomb can create up to 1 Shadow per Second and with Dark Quiver you can create even more than 1 Shadow per second.

If you through in some other skills you will quickly reach a point where you generated multiple wards per second and all your “Ward per shadow created” will leads to a few hundred wards per second.

This will not really stack up as much as other builds, because you have a low Ward Retention as a Rogue, but still it will give you a lot of damage mitigation.

There is also one Passive (Death’s Door) and one Item (Nightbringer), which benefit from being low health.

So you can combine these with one or two of the “Missing Health gained as Ward per second” Items.

I did a Nightbringer Marksman who’s running around with 1-2k Ward only with Last Steps of the Living (solely to be forced into Low Health) and the rest of the ward comes from Shadows.

I haven’t really touched the Marksman side of things yet. I did see some generic dex/dodge/defense nodes at the beginning of the Marksman passive tree. Is it worth going 15 in marksman (as a bladedancer) to get these bonuses and dark quiver? I assumed it was for ranged only, but I haven’t actually looked at it yet. (LE Tools is blocked on the work network

You need to have a bow equipped to use Dark Quiver, so the only situation where you want to be a Bladedancer, but still using Dark Quiver would be on a Throw Build, because Throwing Skills don’t get bonuses from weapons, you can simply use a bow with generic “%inc damage type X” prefixes and generic “Ailment Y on hit” + a quiver also with ailments or resistances.

Then you could utilize some of the Dark Quiver utilize for a BD Throwing Build, but this are very specific builds.

I just wanted to post a quick video example.

Pay attention to the Ward + Health (not so much the skills, gameplay, etc.).
This character has 100% Glancing Blow chance (Dodge converted to GB) and only 13% Armor. 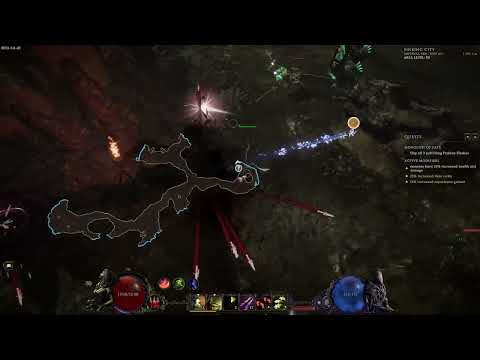 I seriously considered going for 100% glancing blows, but couldn’t seem to get it past about 45%. I wasn’t sure if shadow daggers from umbra blades count as “melee” to proc dusk shroud reliably or get any higher GB.

I didn’t know that I could use a bow as a weapon while focusing on throwing damage. That’s useful to know.

Here is the build in the video, if that helps.

Thre is currently no way to get true permanent 100% GB (outside of Apostacy). 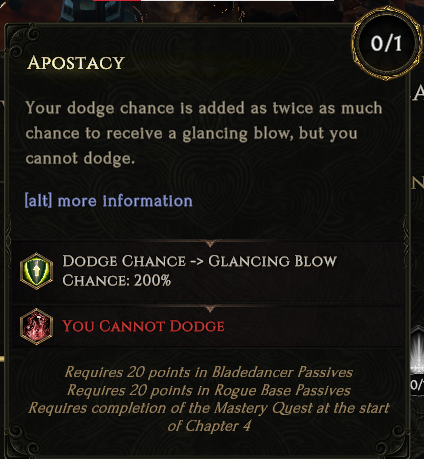 Outside of that the next best thing is Arrowguard (which rolls up to 50% GB), which still requires you to get a few stacks of Dusk Shroud to reach 100% permanently, which is kinda easy. 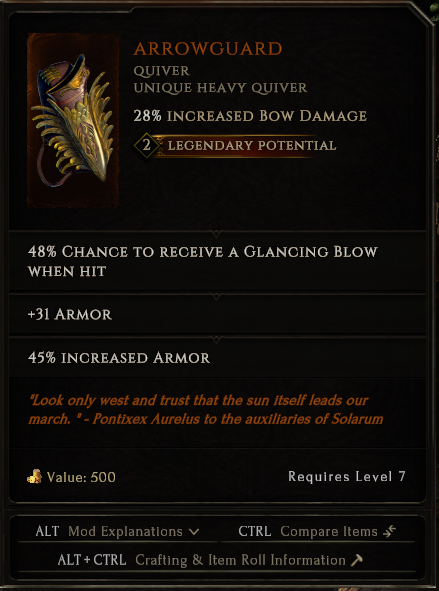 For all other builds you kinda need to have high amount of Dusk Shroud Stacks up permanently, which is possible, but requires you to actively do something, which again is not a big deal for some builds, but it still needs some ramp up time if you go into combat.

I have a few Arrowguards, I just didn’t realize I could equip them as a Thrower. That should open up some interesting possibilities, as most of my weapons only focus on +physical damage…although it’s hard to justify all the lost bonuses from the dual wield passives.

If you play a Throwing Build with a Bow + Quiver you definitely need to reallocate some passives, but it’s worth considering.

Also remember, DW will make you take increased damage, so going away from DW will give you more mitigation

Yeah, thinking about it without access to the trees, there’s a lot of damage and ailment chance that I would have to give up. I haven’t actually had issues with survivability aside from the occasional one-shot, but I know it will be an issue eventually, and getting to where I have more than 40-60% dodge and about 45% GB is something I want to figure out.

Knowing that the rogue can’t really sustain ward has me realizing that this class doesn’t have a proper stealthy mage or caster rogue archtype like PoE’s shadow.

Knowing that the rogue can’t really sustain ward has me realizing that this class doesn’t have a proper stealthy mage or caster rogue archtype like PoE’s shadow.

I would not necessarly connect ward and sorcerer/mage as a theme here.

But yeah Rogue does not have any “magic/spells” at all.

I still like that you can do weird off-meta stuff in LE and it actually works very well.

Some of those builds, where you are at first like: “Wait… what, why???” and then you are like “Ahhhhhhh, that makes sense” you know

So if I wanted to do a thrower using a bow, I would probably be able to use more of the marksman tree.

“While wielding a bow” conditional stuff will just give your character whatever stats it says, these would work for anything that can benefit from these stats.

“On bow hit” however would only work for skills that have the bow tag.

Ive tried this and i dont see it happening unfortunately.

So I figure Arrowguard + passives to cap or nearly cap glancing blows, combined with 100% CSA, a moderate amount of dodge, and max resists.

Then I’m thinking to use Dark Quiver to generate shadows & Ward.

The part i’m stuck on is damage type. If I want to stick with umbral blades (as a bladedancer), then I’m missing out on a bunch of bleed and poison chance from not using swords or daggers. I’m not sure if a purely physical build would work, or maybe some other elemental type?

Or maybe I need to level another rogue as a marksman to do this, that would open up a few more options.

You can have both generic bleed and poison chance on bows.

Also getting arrowguard with LP is super easy and you can try getting poison or bleed chance on that as well.