First, this is NOT a guide.

Secondly, English is not my native language, I used a translator when writing the text. But since it is important for me to convey the idea, and not just throw out a lot of letters on the forum, any adjustments are welcome!

Rogue is my first character. I searched for information about him and in the most cases, the guides were reduced to the instructions “take this, this and this”. In addition, all this was limited to 300+ corruption at best. Very rarely, there were explanations why we take this or that node in the tree. Combinations were often used simply “because everyone does it.”

So there will be a long text below in which I will tell you how and what I did for my rogue, and why.

Up to 300 corruption I ran and tried different, but standard for rogue options. And… since I’m not a super mega pro player, I’m tired of DYING.

So I deleted rogue and created sentinel.

I plan to expand and continue the story, up to the current 1000+ moment.
There will be a couple more “plot twists”)

If you have any questions that I didn’t mention, please ask, maybe I tested it and will be able to share the results.

Oneshot fest is expected ahead))))

Correct me if I am wrong…
13 unique shields in game. That’s almost 8% chances to get one on each rune of ascendance.
It sounds extremely easy to get one, what am I missing?
Edit: forgot about the set items, so % would be lower. Still very easy though.

I want to say that the rune of ascendancy respects the unique re-roll chance so more common uniques are more likely to be obtained, but I could be wrong.

Ah, yes, that would make sense. I hope it is the case.

Still wish they would remove or at least nerf this Bastion though.

Still wish they would remove or at least nerf this Bastion though.

Nahh… I am of the opinon that they should:

I like the concept that unique items have affixes that are unique in mechanics, and not just x3 values. Bastion fits perfectly into this concept, although in my opinion it requires certain adjustments)

Who can say why Bastion OP?

I didn’t say it was OP (although Vapourfire did), I only said I wish they would remove it.
Because every single completely block-unrelated build, with any class, any skill, uses it these days, it doesn’t make sense and badly hurts class identity.
Amongst many others: Arborus’ Poison Flurry Bladedancer, PerryThePig’s Numlock Spriggan Druid, Boardman’s Shatter Strike Spellblade, Boardman’s Death Seal Lich, Insidius’ Totems Druid… All these builds would work perfectly well and have better identity without the Bastion. And there are many, many other examples.

That said, I don’t mean to hijack your thread so I will stop arguing that. Sorry.

Huge respect for corruption 1000, obviously you worked hard to experiment with everything available and min-max to the extreme. Amazing result.

That said, I don’t mean to hijack your thread so I will stop arguing that. Sorry.

This topic is just created for such discussions)
I just attach descriptions of my experience.

When I have enough energy to finish writing this topic, you will see how different the characters turned out, if you do not take the generally accepted combinations of skills and gear as a constant)

Because every single completely block-unrelated build, with any class, any skill, uses it these days, it doesn’t make sense and badly hurts class identity.

I am currently making a Rogue for 400-600 corruption for my 4-year-old son, hopefully without a bastion. We’ll see))

If we consider 300+ corruption to be an endgame

Based on what I have seen recently, especially with the addition of Legendaries and the power level increases from gear, I think that top corruption levels have moved to about 500+ for min/maxers… Normal casual players with some skill 200+… but there is a lot of content and more end-game difficulty still missing… There is no reason in my mind why they cannot have a Julra T10 eventually… or make any of the other end-game content even harder…

EHP vs 1-shots
https://tinyurl.com/ybf7jnbw
But i think we can do 70k+ EHP

14% does not play a role on Jurla to be honest.
A small reward for the genocide in the Black Sun )

To properly evaluate the bastion, you need to know how it was originally conceived

I can assume that this is a shield that significantly improves the quality of life, but only from opponents nearby - which is what it says there

But in practice, “nearby” is very not nearby)
I think it is necessary to reduce the radius of “nearby” - and the idea will remain, and the ability to block everything on the screen will disappear.

I think it is necessary to reduce the radius of “nearby” - and the idea will remain, and the ability to block everything on the screen will disappear.

If I were forced to agree to make a change to Bastion, this would be it…

I dont recall the Devs specifically discussing the range of attacks and cannot find anything specific about it in @AndrewTilley Community Guide either… so Nearby is very vague… but considering weapons all have a “Range” value… it seems logical to me that Bastion shouldnt really have a range much larger than that of 4 or 5 (3 is the farthest I can find on a Spear) to be within Melee range… there are some skills that extend range etc, so maybe Bastion was designed to take those into account too… hence the Nearby…

Honestly… I hate to admit it, but they should probably make this change to Bastion… BUT please for the love of all things unholy if they do that, then they need to boost other items else we just lose a good item and get no other benefit…

Current “Nearby” is the distance of the circle around the dummy.

so Nearby is very vague

They’ve always said that “nearby” is roughly the range of the circle round the training dummy. Plus from memory when the Bastion is equipped there’s a circle around your character. 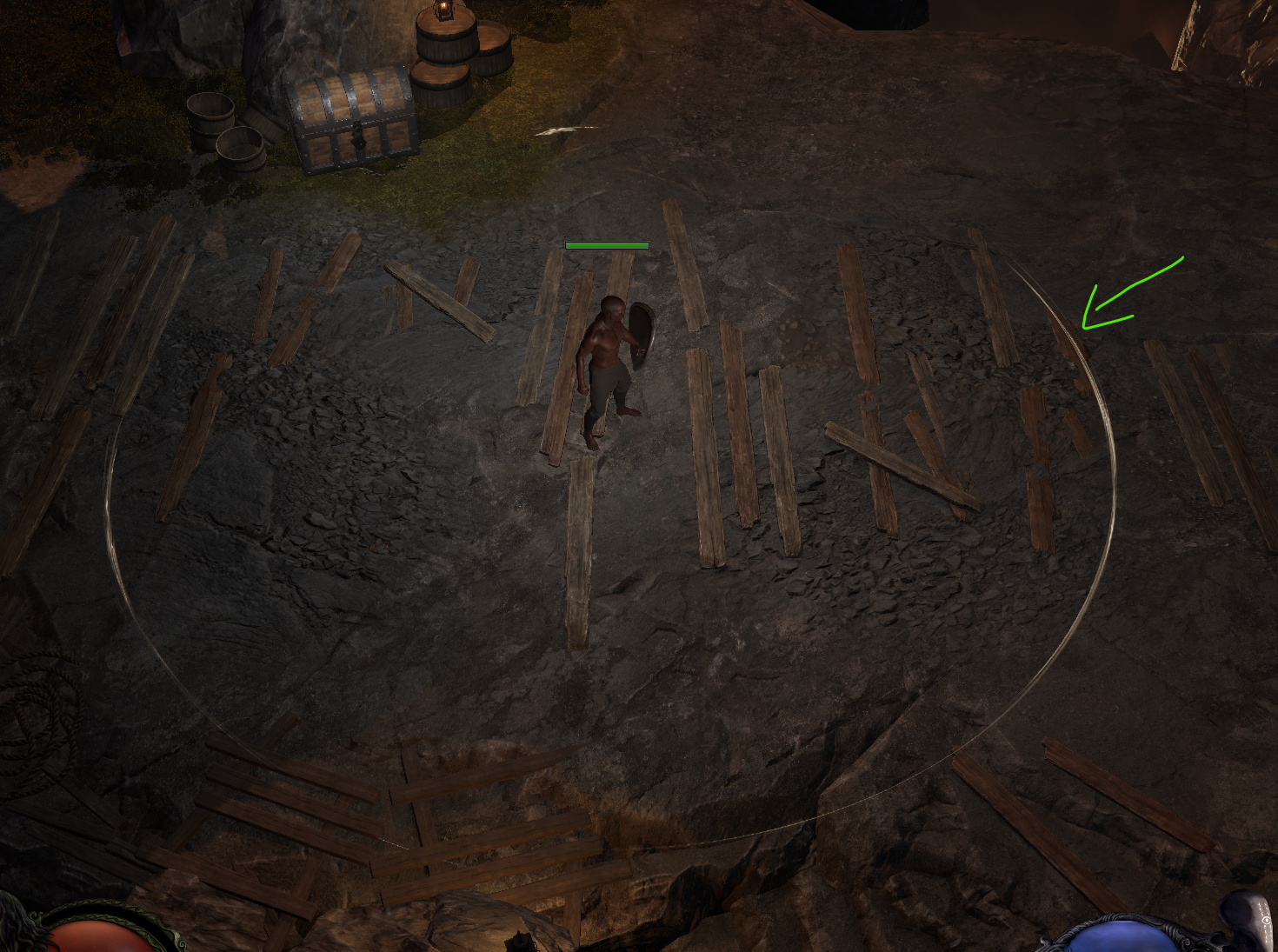 Edit: And weapon range doesn’t really have much of an impact on one’s skills.

Yes @Shtrak and @Llama8 - I do know this. I have been playing more than a few moments obviously. I prefer my eggs in a smoothy…

The question is related to Nearby being vague is because its different in different situations and nearby for bastion doesnt seem to be nearby for other skills or situations or gear… Range for weapons etc, seems to exist but isnt very obvious in its implementation.

I don’t think it is though, unless you have some examples?

I prefer my eggs in a smoothy…

Not sure that translated into English quite right.

Given what the devs have said in the past, that’d probably be a bug.

I don’t know, I really don’t feel that “nearby” is vague, since we know precisely what it represents. It’s vague for all players that are not informed yet, like “recently” may be vague for some also.

Range for weapons etc, seems to exist but isnt very obvious in its implementation.

This, I do totally agree!

Not sure that translated into English quite right.

I was hinting at this in a generally sarky way…

I don’t think it is though, unless you have some examples?

I dont have examples and dont have the time to go look specifically right now but its like the issue with skills that have nodes that affect the distance of spells/attacks etc. There were a few examples of this in the bug section (cannot recall now, but I think it was one of sentinel shield based skills and some others) where an increased distance node is very hard to tell that it even works… There are other nodes where the distance node (e.g. Flurry shockwave) works well, but unless it has some visual animation, its very hard to see where the trigger point actually ends…

I don’t know, I really don’t feel that “nearby” is vague, since we know precisely what it represents. It’s vague for all players that are not informed yet, like “recently” may be vague for some also.

Its not the terms themselves… its the difference in secondary effects that apply… Recently is, afaik, fixed and cannot be changed… But distances for skills/effects tends to be more ambiguious because it can be affected by other things like skill nodes so it can be less fixed in stone…