Last Epoch’s next update is getting closer and closer and it will bring a lot of new powerful unique and set items for you to hunt! Here is just a little taste of what you’ll be able to find. 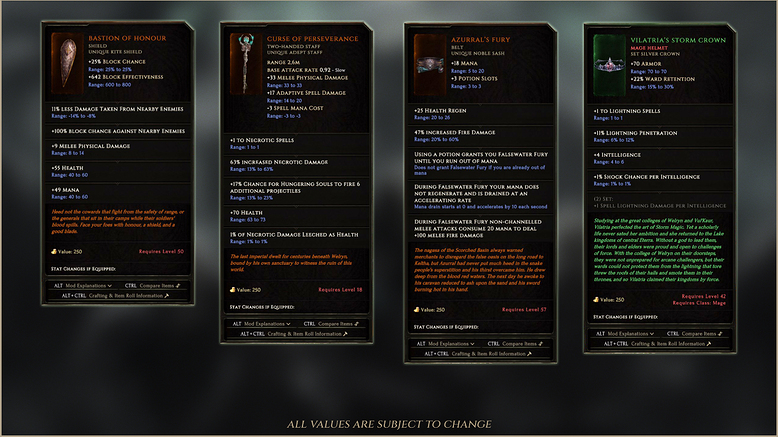 Holy #$%^ Those are VERY powerful.

I’m assuming block is getting another revision because that seems really strong. I can’t wait for lightning meteor and it’s nice to get a spell necrotic leveling unique.

Yeah, my immediate thought was (as my kids would say), oooof, that shield… Imagine how tanky it would make a low life werebear (even if you’d then have issues hitting crit cap).

Do you have something other (reasonable) than Ailments [Frostbyte/Chill/Freeze/Bleed] on “Cold Hit” on offer?

→ How about idols/Items like:
"Chance to cast Frost Blast (Lightning Blast with Supercharged Floes or with Rune of Winter) or Iceball (Fireball on Ice) “on Cold Hit”.

(or maybe something new like DOOM [void] for Ice

Yes, that would be nice but I’d like some other Mage spells to get some love other than just Lightning Blast.

Curse of perserverance… SPELL NECROTIC LEVEL
Necrotic Acolyte is OP enough already, you didn’t need to give them a buff!

Azzurals Fury… drink potion, explode a boss
no, I am serious, this lets you one shot bosses

All of these are buffs for meta builds

Should be called the power creep patch

Depends a bit on how close you really have to get with “nearby”.
→ If you have too much range in close combat, it could get bloody.

Curse of perserverance… SPELL NECROTIC LEVEL
Necrotic Acolyte is OP enough already, you didn’t need to give them a buff!

The base damage is quite low for a two-handed weapon.

Azzurals Fury… drink potion, explode a boss
no, I am serious, this lets you one shot bosses

PS: I’d like something new for Ice Barrage, no one plays that reasonably or well, while that ability is basically pretty “chic”.

Its not actually a particularly good dps staff due to the low adaptive spell damage, high end staffs go up to 100 (or 120 if you’re ok with %increased mana costs).

The belt is good for burst dps, it’d probably be best for a Paladin or fire Spellblade, but its probably “only” an additional 30% dps (from a slot that doesn’t usually get used for that unless you go for the ignite on potion affix) and you’re giving up a lot of defences for it.

As for the helm, Mages tend not to stack lots of Int, Acolytes can stack quite a lot (Necros can get up to around 100 or so) but don’t do spell lightning damage, and you need a second item for that and we dont know what it is, plus it’s a helm so you’re missing out on + skills.

I’d say most of them are pretty well balanced on paper. The shield is probably the least balanced of them, but you’re not going to notice the added melee damage.

I also don’t think equipping any of them (possibly except the shield and maybe the helm) and people will be breezing through wave 10,000 or 1,000 corruption while rolling their face on the keyboard.

if you can get a high end roll that shield is amazing as -16% damage taken is nuts for one item. Edit: Somewhere between 20-40% overall damage reduction depending on your build when combined with block and effectiveness is just bonkers. Can even remove block chance nodes and use dodge now if your a Paladin. Yummie AF!

The less damage taken is only for melee though, same with the block chance.

Actually it’s not. If a caster is “nearby” (which is a similar range to the ring around the training dummy, so a decent range!) its spells will be blocked, reduced by the “reduced damage for blocked hits” as well as your block effectiveness. Plus there are some “on block” procs that I’d really like to try.

If a caster is “nearby” (which is a similar range to the ring around the training dummy, so a decent range!)

Are you sure that the radius of the training dummy corresponds to the said “nearby”?
→ If that’s the case, the shield is great for some builds, you can definitely play around with it.

It’s stated by the devs, that that is the best reference to nearby.

Actually it’s not. If a caster is “nearby”

What I meant was it’s only effective in melee range, not that it only affects melee damage. Sorry for the confusion.

Gotcha! Though according to the devs, it’s actually quite a large range.

And really I can’t understand WHY the small team spend their time for develop all of these uniq items… instead of balancing the CORE gameplay
How will you manage to make a good balance correctly? I can’t believe in it

Why is this bad?

How does adding Uniques make the game harder?

99% of Uniques are not trash in Last Epoch. I also Disagree that adding in more uniques is not going to scare of new players. In Fact I would counter your off with MOST players including those new are exciting for the new uniques including the new unique idols.

instead of balancing the CORE gameplay
How will you manage to make a good balance correctly?

What makes you think there not doing both at the same time? There is still a while before release and a ton of more content coming to the game. Its already been mentioned that balance is one of the last things that will get done before 1.0 release and it makes sense considering there’s no point balancing a game that doesn’t have everything in it yet.

I can’t believe in it

I DO believe in EHG.

I am curious about what makes you feel this way with uniques. Have you played Last Epoch? Or is all of your basis of your experience in PoE?