What nodes on Lightning blast affect it when it is cast that way? Specifically I was wondering about Overcharge and Hypercharge. I don’t have enough points in overcharge yet to make it common enough to be noticeable if it is working that way.

Also I am assuming cast speed node does no good and it just casts once per second no matter what?

Skills triggered by other skills use their completely specialized version, unless otherwise stated.

Both Overcharge and Hypercharge will work.

And yes, cast speed will not affect it, since the trigger via Tendrils Node happens at a fixed rate determined by the Tendril Node itself.

Thanks for the reply. I got another point into it since I post that and it becomes noticeable then lol.

Do you happen to know if you put a points into Infernal Ray and Electrify if they cancel each other out and turn Disintegrate back into fire/lightning damage?

Putting the two is useless, the base damage is already of the two elements. These nodes exist if you want to change the radius to 1 unique element. So if you play lightning change it into lightning, and vice versa if you play fire.

But I understood that you wanted to play with ligthning blast, so I advise you to play it lightning, and you agreed on the lightning damage.

I advise you to take a look at it, you will have answers and this seems to be a build that will suit you if you play disintegrating lightning mage

The Disintegrator! A Full on Mage Tank That Disintegrates Everything it Touches 0.8.1c Mage

Thanks. I am currently doing something similar. I took electrify to mesh better with lightning blast, plus for the laser focus node behind it. I was wondering though about taking infernal ray too so it has a fire tag again for the sake of certain passives and uniques that work with fire skills i.e. ignivar’s head, cindersong, and the dragon nodes.

So you are free to do as you want, I say it now I only give advice and are not absolute truth.

But in LE it is not worth having too much element, it is often more profitable to have a Maximize type of damage, than to scatter it.
Also most of the unique ones (not all) are not optimizing, they are useful but often an object given to you a minimum optimizing will be much better. So personally I totally advise against having too much unique in your stuff, and scattering over too many types of damage at the same time.

Similarly to know disintegrate does not damage or very little, it is especially lightning blast which does damage. So it is counterproductive to seek too much disintegrated booster. So that in case you play lightning blast you maximize the lightning damage, or the damage during the channeling.

Because it will give a little boost to your disintegrate, but especially to your lightning blast which is your main DPS spell.

I know it can be frustrating but a build or disintegrate is your main DPS spell is impossible, it doesn’t do enough damage and can’t crit.

So in general, as in this construction, it is used to channel other spell at the same time, or it goes out on sickness break (burn) but in both cases it is not this spell that does the damage.

Both Overcharge and Hypercharge will work.

You sure about that? 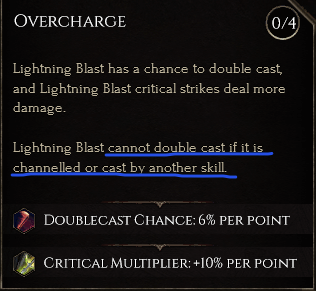 Yes as the lama said, it doesn’t work if it’s caster via disintegrate. (test personally.)

In general we will play the nod which causes all the chains to hit the first target, to maximize the single target damage. For the multi disintegrate and some blast is enough.

Well crap, that shows my reading comprehension smh. I had seen that it didn’t work when channeled but skimmed right over the cast by another skill part or I never would have asked.

What? Is that new? I haven’t played Disintegrate LB is a looooooooong time.

I was wondering if the tier 2/tier 3, and paralyze upgrades of the disintegrate carry over onto lightning blast

Nope, it’s been like that for a long time.

No, if the thing being proced by a skill (lightning blast) has a skill tree (which it does) then it doesn’t inherit anything from the proccing skill (Disintegrate) unless specified (like Firebrand does).

TLDR, inheritance is for ailments not skills (unless the proccing skill is Firebrand).