With patch 0.7.9 we are introducing a new item rarity, Exalted. These are just like any other magic or rare item except that it has at least one affix which is tier 6 or 7. Exalted items will display as purple on the ground and in your inventory so they will be pretty easy to pick out from the crowd.

We’re relatively happy with how powerful T5s are compared to how difficult it is to craft them. However, we feel that with them being the highest tier of affix on a rare item, it’s a little too easy to get near perfect items so quickly. This makes it far less exciting to hunt for gear instead of simply gambling and crafting. Another problem is that it makes it very difficult to balance end game uniques. We don’t want uniques to be best in slot for every situation as that invalidates the huge range of different randomly rolled rare items. We want most uniques to be useful for a decent stretch of the game, and in the case of end game uniques, we want them to often be better than the rares you have equipped when they drop. In previous patches this has left very little room to balance end game uniques, either they’re stronger than 4xT5 rares and are therefore best in slot, or they’re weaker and therefore are often not worth using over what you currently have equipped.

Our solution to these problems is to add Exalted items, which are rare or magic items that have one or more T6 or T7 affixes. These tiers are uncraftable and affixes of these tiers show up purple on item tooltips, matching the overall tooltip colour of exalted items. 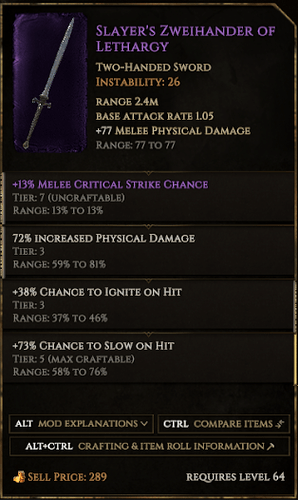 Having tiers above T5 allows us to create a gap between the rare items you normally have equipped during end game and perfect rare/exalted items. That gap provides ample space in which to balance end game uniques, and that gap provides more motivation to keep searching for better items. To be clear, T6 and T7 affixes are never supposed to become an expectation of builds. Even builds that are otherwise “finished” will likely have items with one or two T6 or T7 affixes each at most. This means that there’s always the chance of an upgrade dropping for any of your rare or exalted items. Exalted items will likely also feel more specialised than rare items. For an end game rare item in 0.7.8 or before it is common to have three or four affixes at their maximum tier, T5, so the item doesn’t really excel at granting any one specific stat. However in 0.7.9 many of your end game items will be exalted items with a single T6 or T7 stat (alongside other affixes at T5 and below). These should feel more focused around granting that stat; they’ll be better at granting it than any other item you could easily craft or find and this should help those items feel more special.

In order to keep items from gaining too much power potential all at once, we have slightly reduced the top end power of many T5 affixes. The only exceptions are low value integer affixes, such as All Attributes which at T7 is +7 to All Attributes. Other affixes which have much bigger ranges have much higher new top end potential. For example, Chance to Bleed now has the following stats:

This is fairly representative of the types of ratios that you’ll see across most affixes. T5 and T7 affixes generally have a similar range while T6 usually has a smaller range. Each affix has had its values specifically adjusted for this change and many have had balance adjustments made at the same time. This does mean that many existing high end items will experience a drop in power.

With this adjustment in power, the levels at which these tiers become available have also changed. Tier 5 affixes now start dropping on items as early as level 32, instead of at level 81. Tier 6 affixes can start dropping at level 55 (what level does the monolith start at again?). Tier 7 affixes are reserved for the very top tier gear and will start dropping at level 90. The difficulty to find these items should not be underestimated and even though T6 can start to drop at level 55, it is unlikely that you will find one in your first monolith run. 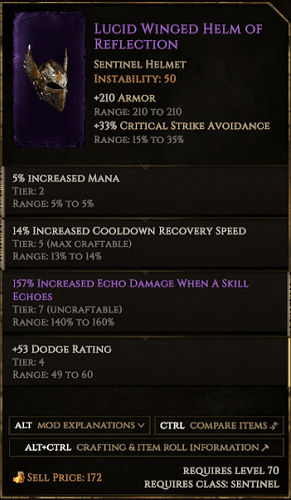 unknown (2)314×538 192 KB
While it is not possible to craft additional tiers of a T5+ affix on to an item, it is possible to craft other affixes on to Exalted items. This means that if you have an item with only a T7 affix on it, you can add any other 3 legal affixes to it and craft them up to T5 if you are brave enough. Items bought or gambled for cannot come with T6 or T7 affixes. The only way to find them is to venture out and find them.
45 Likes
Purple Gear
Patch Preview: Beta 0.7.9
Jerle August 4, 2020, 12:00am #2

Yes! I was hoping they’d have a new color instead of just yellow!

Will there be any special weightings to the removal chance of T6/T7 affixes when we use Rune of Removal?

When is this update coming?

Will there be any special weightings to the removal chance of T6/T7 affixes when we use Rune of Removal?

I really want to know this too. I think it’d be great if they couldn’t be removed (or maybe even unable to be cleansed?)

Unable to be cleansed would be waaaaaay too OP, but having a super rare version of the rune of removal that ignores exalted mods would be neat.

What happens with a damaging fracture and a T7 affix. Does the Affix go down to T1 or does it stay static?

Even builds that are otherwise “finished” will likely have items with one or two T6 or T7 affixes each at most.

Unable to be cleansed would be waaaaaay too OP, but having a super rare version of the rune of removal that ignores exalted mods would be neat.

That would be nice. I just know I’m gonna find a T7 that I want with 3 other affixes that do nothing for the build I want the T7 on

Exalted items will display as purple on the ground and in your inventory so they will be pretty easy to pick out from the crowd.

Will Exalted items also show up on the minimap like uniques do?

He’s dusting off the ‘Deploy Patch’ button I’m sure

This…this is how an arpg should be. You guys are going the right way to finally make players having fun again killing monsters and being rewarded for it with BiS items! Even though crafting is such an important part of an arpg, it should never be so easy to craft perfect gear while sitting in the hideout. Going out, exploring the world, killing monsters, looting treasure, thats how i like it. Great move.

This is interesting. I am very curious.
So we can’t craft the affixes themselves but we can still craft the items.
So say I get a T7 affix that would be Super strong for my build but the other 3 or some of them are useless to me. I can the use a rune of removal and what not to remove an affix/ affixes then craft one that will suit my particular build.

I am really happy if this is the case and I am understanding properly. I was wondering how that was going to be implemented.
because I could have one really good affix and two or 3 that I don’t need then would run the chance if that being useless and with them being are rare as you are claiming. is just wouldn’t feel good to get an epic drop and can’t even use it or make it work. (not saying I expect them be automatically be useful because they drop)

I am excited to see the extra dynamic they add to the game and how they shake up the current way things are done.

Hopefully this made sense. I am much better at talking out my thoughts then writing them out. Hence why I make videos content

Good job and excited for the patch!

Well, that’s exactly what we were going for so that’s good haha.

I really like this and am excited to see how “Endgame Uniques and Legendaries” fit into this too I am assuming you want just to have majority of crafted gear to keep crafting a relevant part of the game.

So I am expecting 1-3 uniques / Legendary items would be ideal
but the question is as well.
do you plan on leaving set items as they are or bring them up to par with end game uniques.
Not all ofc but I am sure some would be.

There is still room for high tier sets to exist in our vision of our 1.0 item system.