I first created this build on Beta patch 0.8D
I’ll make sure to come back to the Guide after Patches and update it accordingly.
I will note Changes up here.

- Weaker Defense while not hitting
- "Dont' get hit"-Playstyle. You have to actively dodge
- Low Lifepool

How does Poison work in Last Epoch?

Poison has his own Damage Type which is dealt over 3 Seconds and can stack indefinitely. Additionally, Poison lowers the Resistances of affected enemies. Each stack decreases enemy poison resistance by 5% (2% for bosses and players). So the more stacks the Target has the lower Resist it has and the more Damage they take from Poison.
The following Section explains most Interactions and focuses on Mechanics which can be counter-intuitive for some people coming from other games in the Genre.

This is pretty straight forward: You use all your Skills on Cooldown and keeping Shurikens up while trying to dodge Enemy Skills and everything around you dies from your Poison. 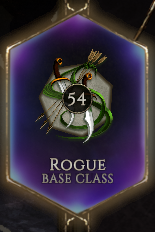 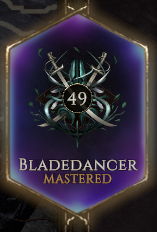 You should opt to get capped Resistances as soon as possible and also work towards 100% Critical Strike Avoidance. I went for all 3 Set Resistances and the Unique Body Armour “Woven Flesh” to reach those Goals. The Rest of the affixes can be either invested in additional Defenses like Dodge Rating, (Hybrid) Health or Armour. Or you can aim to get more offensive Stats on other pieces than your Daggers in Affixes like “Damage over Time” or “Throwing Attack Speed”.

How you reach the Resistance Cap and Crit Strike Avoidance Cap is totally up to you and can also be achieved through Single Resistances and is influenced largely by fitting Exalted Drops.

Below are desired Bases and options for every Slot of Equipment shown and explained: 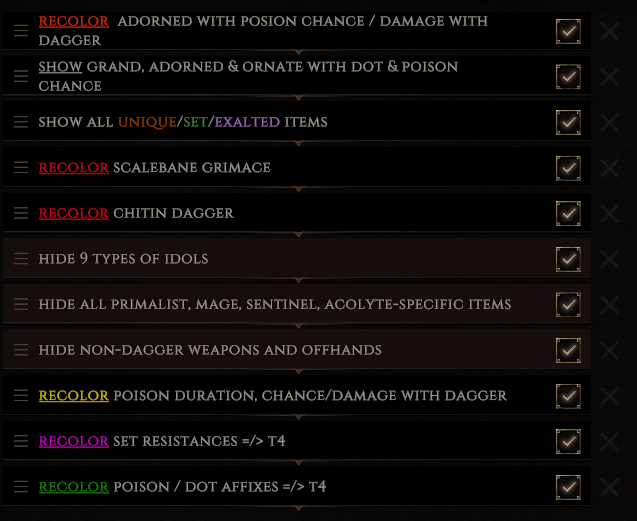 Use at your own Risk!
Poison Shurikens Late Game.xml (8.1 KB)

This Is my first attempt to do a Build Guide.
So any constructive feedback concerning the Build or the Guide itself is highly appreciated.

I’ve been wanting to play a poison build, but have been putting it off because I’m expecting a massive nerf after Boardman21’s 11 mil poison shenanigans.

Your guide’s convinced me to give it a shot anyway. Love the format and the detailed explanations of choices and mechanics.

Thanks for the guide!

Excellent guide! However it’s missing a few points about poison (and ailment damage in general) scaling.

Ailments also scale with the attribute that buffs the skill that applied them. So if they were applied by Shurikens they’d also get 4% increased damage per point of Dex.

Any non-hit damage modifiers on the skill tree will also be inherited by poison, such as Chakram (30% more damage).

Additionally, poison has a 5% (2% versus bosses and players) reduced poison resistance per stack affect, so the more stacks the target has the lower resist it has and the more damage they take from poison.

Thank you very much for your feedback.

I wasn’t quite sure how Dex interacts with it and couldn’t figure it our through testing.
Same goes for Added non-hit damage in the Tree, quite interesting.

Forgetting to mention the poison resistance debuff it applies is quite is a mishap. It was quite late when I was adding the finishing touches.

I will add your additions in the poison section, thanks for the correction, much appreciated!

thanks for linking my guide.