Have FPS drop with a "good computer" with full low settings

I wanted to play LE again with my new computer but I still have fps drop with full low settings.

btw, what do you need for more informations ? I have my ini files (i guess) le_graphicsmanager.ini (486 Bytes)

The link in the topic “read before” is down (?), it’s a dxdiag information you need or something ?

Hey there… Welcome to the forums…

I still have fps drop

You dont really indicate what kind of fps drops - how much? from 60 to 10, or 60 to 50? Is it in a particular map or when using a particular skill or when doing something with the UI.

As LE is still beta and generally unoptimised, you will still see fps drops (usually normal small amounts) based on the complexity of what is going on during play, but you shouldnt get noticeable fps spikes unless there is something odd going on… For example, I use a 1060 GPU and generally play at 1080p, very low settings, 60fps limited and for 80% of play I get between 50-60 fps… when things get very busy, this might drop to somewhere in the 30-40fps range but its hardly noticeable as there are no big spikes .e.g. 60fps to 10fps suddenly.

Based on the info you have provided and making some assumptions:

EDIT: As a last suggestion that I forgot to mention, you need to monitor your hardware for temperatures, usage, clock speeds etc… and verify that everything is running within norms… I.e. your GPU is overheating because of a faulty fan and throttling back causing FPS drops etc… These kinds of things could be caused by any number of issues that may not “show up” in software without monitoring…

First at all, thanks for your answer. I’m totaly dumb because I just wrote that without more informations !

Thanks a lot for your answer

It’s not the first time, maybe something cause this issues (skills? maps?).
If I said that, it’s because before, I had a 8600k, 8 go ram and 1060 6gb (who died) and I had the same issue. Drop fps from nothing. From all sources (maps, skills, etc) but shaman is the worst

Please can you add the player.log file - maybe there is something in this file that could help. (In the same folder as the le_graphicsmanager.ini)

(If you see old settings, I copy my data (saves only) from my old computer)

Game hovers from 120fps to 50fps if lots of mobs but the cpu and gpu utilisation is non-existent.
Any advice, thanks?

p.s. please dont tell me i should be happy that game runs around 50FPS.

Hi, Unlike with other sections of the forum, its best to create your own thread in the Technical Support section as its very possible that while the problem could be showing similar results - like slow performance, the cause in your instance could be entirely different to the OP and it can make the thread quite confusing.

Just from your description - there are any number of known issues that could be causing it… but its impossible to say without more informaiton.

Please can you open a new thread and include:

Game runs at max capacity in most areas… but certain areas for example “docks” in early campaign runs extremely poorly, cpu and gpu just isnt doing anything there.
But in majority of areas game uses the gpu to the max. Heavy enemy number count increases cpu usage as it should but it just doesnt rise above 40% which is great, because main bottleneck is gpu. I will play with settings more and when im not lazy i might compile the required files to show - but nobody will find any fault at it (ofc its possible but it shouldnt halve fps) I checked some forum replies and i dont have that program that interferes with unity engine.

Ok… You are describing issues that plenty of people have had and that have mostly been sorted or there are workarounds for or have been confirmed to be very specific bugs… but look, I cannot help you unless you are willing to chip in with the info etc. Up to you.

Player.log (31.8 KB)
le_graphicsmanager.ini (479 Bytes)
DxDiag.txt (92.4 KB)
Well im doubtful it can help but atm at docks im around 90fps with no enemies and with enemies it dips to ~60fps with gpu and cpu not working. Thanks for help!

The player.log isnt showing any known debug messages associated with performance issues - i.e. texture loading, particle subsystem effects problems etc… So its fair to say that those kinds of things are not at play here - which is a good sign.

Your in-game settings. There are various known issues here that are less about your hardware and more about the beta and unoptimised state of the game and how pushing the settings causes issues.

Certain maps - You mention the Welryn Docks… Immortal Summit seems to be another and there was one of the Outskirts… These all tend to have performance issues vs in-game settings and some are generally unoptimised… There are some maps where your fps at the start of the map is ok, but much lower by the end of the map. (devs know about these). The maps that cause issues tend to be those with cliffs, or panoramic views in the distance… some with background animations/effects… For most, usually a workaround has been to lower quality settings until these maps are less of an issue… For example, on my 1060 at very low 1080p I have no problems in any of these locations and only experience performance issues if I increase quality to medium or above. Its very important to check your performance issues on many different maps just in-case the issue is related to specific map(s). The devs have already fixed quite a few maps in the last two patches and I expect them to do the same in future updates…

System Usage - CPU / GPU… On your system I would be extremely surprised if LE could actually cause it any serious issues in terms of usage… My 4-core i5-7500 barely breaks a sweat playing (even in busy moments) so I doubt very much that your CPU is even able to get to 50%. The Unity Game engine has multithreading but I doubt its using this for all components and I doubt its using all your cores so the % usage will always seem low.

From my experience with LE… its possible to find a compromise between visual quality, performance & stability… It just requires being conservative and spending a little time figuring out what works best on your hardware… and being willing to accept bugs… Making assumptions performance as you would if LE was a completed/released/optimised title just doesnt work right now…

Thanks for reply but the issue is very serious (for me its playable) but for others they will get horrible fps issues.
Here is docks at 720p resolution and very low graphics settings. Game has NO ENEMIES and yet it doesnt rise above 90fps. 90fps is not the issue, its that the game doesnt use resources. If game would spawn 20 mobs there it would dip to 60fps or lower. Some areas are just like that. Many areas with mobs use pc resources. So, sorry but your advice isnt much because the graphic settings doesnt apply to core problem i stated. I hope devs will read this thread and more people will add their input on this issue.
@varpourfire - can you do the same? go to docks and write down cpu and gpu usage. Then make all settings as low as possible (ofc no v-sync) and write down for us cpu and gpu usage. 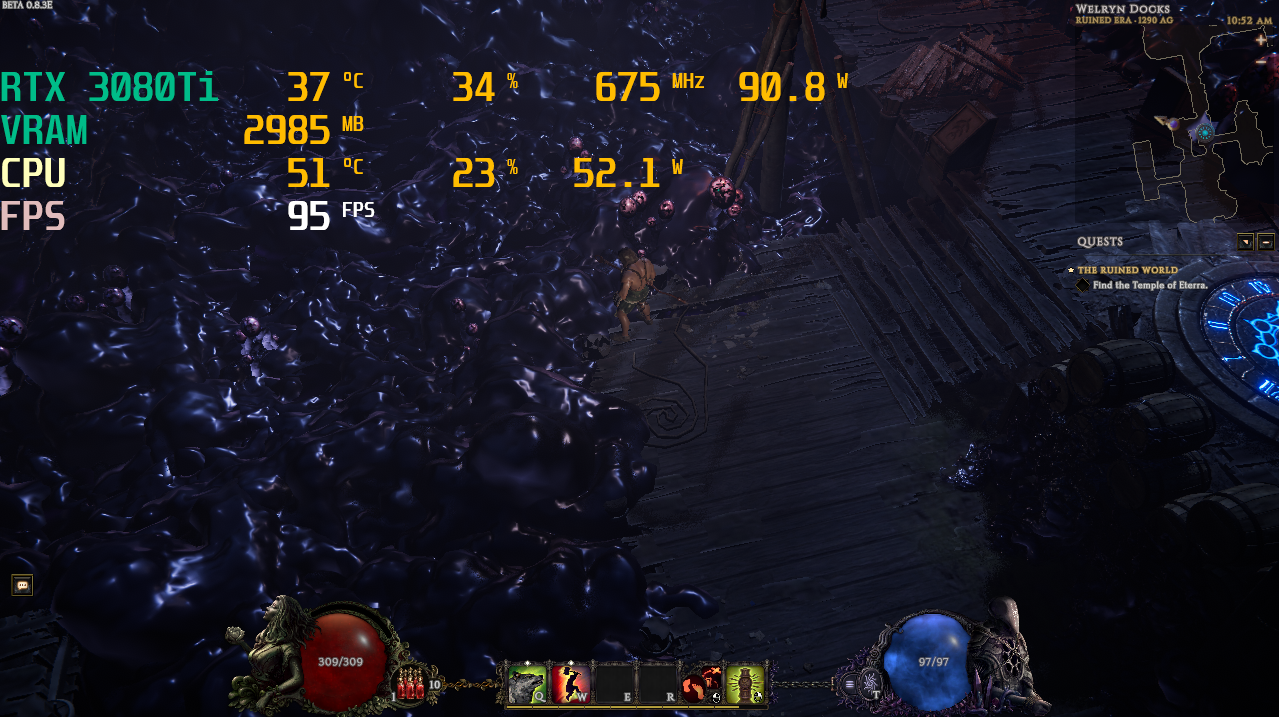 What is going on with your GPU Clock speed? Its only at 675mhz… Thats less than half of what a 3080 Ti is spec’d to run at and a third of its boost clock… Why is your graphics card throttling the clock speed on only 34% usage and 37 degrees?

EDIT: There are quite a few reports online about 3080 series GPU clock speeds getting “stuck” at lower than they should be… lots of potential causes/solutions ranging from power limits and OCs to vram clock speeds and even undervolting… Some of these seem more prevelant to higher end versions of the cards with stock overclocks etc… Could any of this apply to your situation?

Aside to the question about your clock speed…

As requested: My setup in Welryn Docks
(note I removed the framelimit - normally I would not do this).
I have configured in-game settings to have roughly 60-70% usage while doing nothing - i.e. standing around in any location. 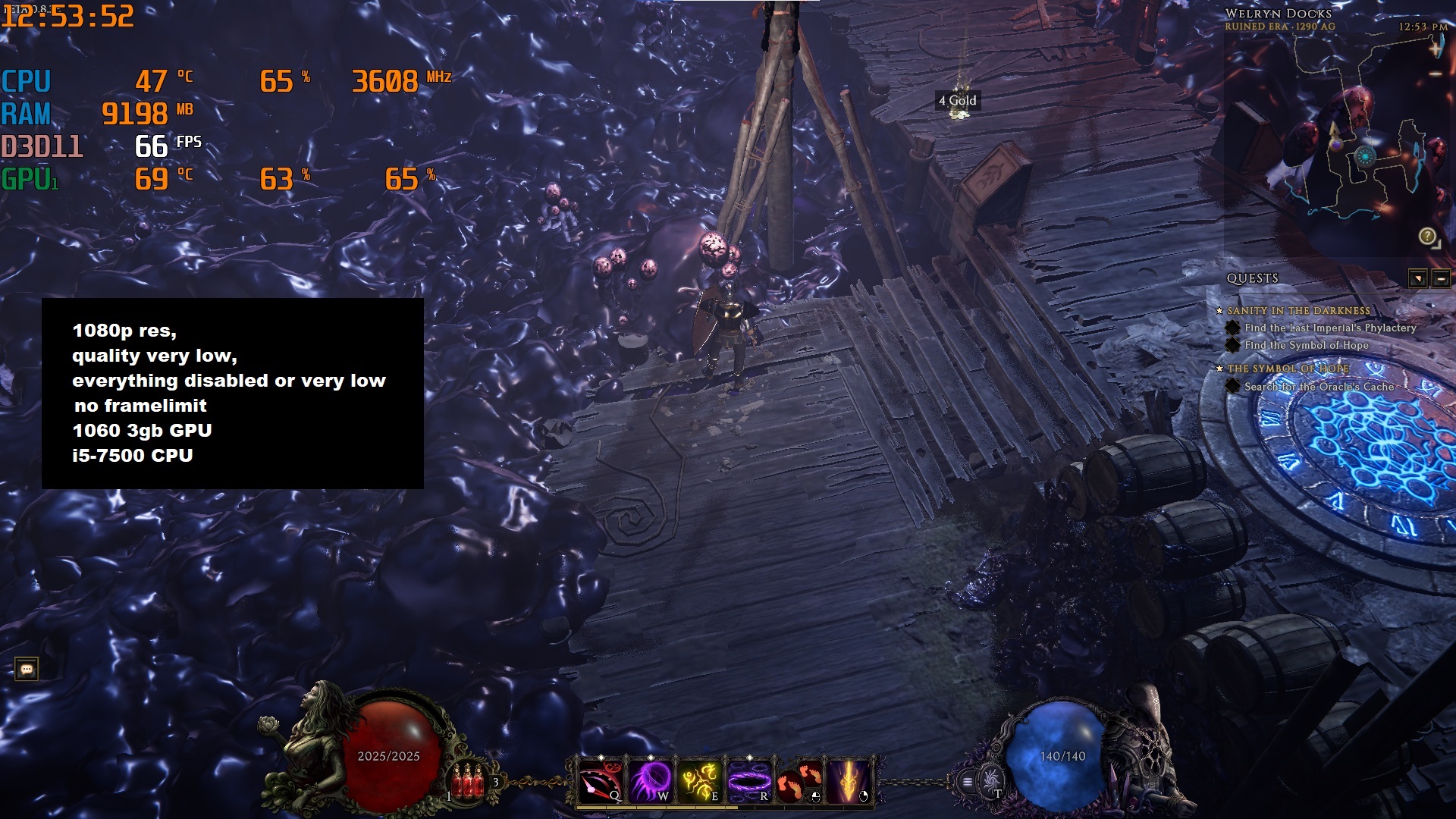 For your picture: basically your pc should give you around 100fps if it used all gpu as it should. If you got nice 144Hz monitor then sadly this area isnt nice to play.

If i make lowest resolution possible then the gpu clocks drop automatically ONLY because game doesnt want to render game in high fps. GPU is not being used. If i run at demanding settings the clocks rise automatically. But like i said: game uses gpu as it should in many areas, just not this one and few other ones. I think it might be some internal settings not adjusted properly for hardware to be used fully.

Poe crashes because its poe - it has fossil engine that they still use and game is decade old. Mod organiser is skyrim stuff - its prone to crash with too much modding especially while alt+tabbing which i do often.
There is not a single idea what comes to my mind why this game doesnt use pc resources. Maybe its just unity engine - very outdated and not fit for modern hardware? Im not sure, but i hope a dev could chime in on this issue at least with some opinion. I hope im not writting too much.

For your picture: basically your pc should give you around 100fps if it used all gpu as it should.

As mentioned before, I get 100fps if I remove all limits on LE and let the GPU max out while playing - the game literally maxes out the GPU unless there is nothing happening (like the imageshot above)… but the game is too unstable and suffers from really big spikes and the fan works its arse off to try and maintain a reasonable temp… So I just dont do it.

I have never heard of a GPU dropping this low below its base clock speed just because of resolution / setting change in a 3d game… I have heard of it doing this based on power delivery related issues and driver problems and when its in 2D mode (i.e. normal desktop mode)… I spent some time searching google for anything to confirm it does this for 3d games/apps but I cannot find anything to confirm this is normal behaviour… My lowly 1060 doesnt change frequency in any 3d game mode - it does change frequency fairly often in normal windows 2d… but not in 3d - it jumpts to its base clock and sticks around there boosting on occassion…

Unity 2019.4 is obviously older and LE is restricted by whatever the game engine supports & can do…