Hi all, this is my first attempt at a build. I might update this as I progress the character further, but so far it works well.

This Build has Manifest Armor as an optional 5th skill if you prefer more offense instead of running Juggernaut Stance. 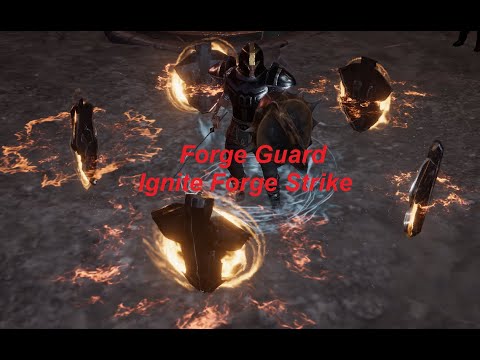 That looks very interesting! I’ve been thinking about a similar thing, so I thought I would share my ideas with you, in case you find one of them fitting for your build.

There is a pair of unique gloves, Maehlin’s Hubris, which converts all your bleed chance into ignite chance. In Forge Strike’s skill tree, on the left, you have some nodes which prevent you from forging weapons with it (Singular Craft), but give you an insane amount of critical multiplier (100% from Spear Forge, 45% with three points in Ironbound), and convert all your critical multiplier into chance to bleed (which is, in turn, converted to chance to ignite), as well as granting you 35% more attack speed, which is really valuable on ailment builds (Put to the Sword).

As this represents an investment of 6 points, you could refund some of the “hit damage” nodes you had in other places, like Lava Burn (Detonated Ground hit damage), Temper (base fire damage; although you still need to keep two points here to reach the nodes behind) or Goliath Strike (hit damage versus rares and bosses). If you have some points left after that, or manage to get a “+1/2 to Forge Strike” body armour, you could try to go for Lightforge, which I’m using on another, minion-based Forge Strike build - the mana efficiency feels amazing, and allows you to use Forge Strike many more times before needing to use Vengeance.

In terms of gear, I found an Orian’s Eye, which is a (very rare) unique amulet. It’s hard to find, but if you do, it gives you a lot of mana, which means you can use a lot more Forge Strikes in a row to burst bosses, as well as making you take all Void damage as Fire, meaning you don’t need any void resistance at all. The main reason why I thought of this amulet is because it also synergizes very well with the Osprixbane passive of Forge Guard, which ends up also substantially reducing the Void damage you receive on block (since you take it as Fire). However, you give up the two possible offensive prefixes, like damage over time or fire penetration, so it’s more of a defensive alternative. (That being said, the consequent mana and the “no void resistance needed” aspects are more general than just defence, but still)

That’s all I can think of right now. ^^ I hope some of that can be of use to you! Have a nice day

Cool, thanks! I’ll have to try and find those items, as I don’t have any atm.

I have the gloves, so updated the build for that change. Working well!

Shield Charge is actually really powerful for Travelling across the map, as well as dealing a large amount of damage. Once you get used to it, its really fun. The build is tanky enough that I don’t need to Lunge at things. But there is nothing build-defining about it, so if you like Lunge better, you can swap it without much issue.