Read more about our recent optimizations work in this Developer Blog.

Hyped for the controller support! Keep up the good work.

Gonna test it out soon.

The new changes looks awesome guys! Thanks for fixing those boots that triple shock you haha. Cant wait to give the changes a whirl!

Great work, probably. Unfortunately, the launcher won’t patch the game. First it complained about not enough disk space (while more than 20GB were left… I think this might be enough), then I freed some more and now get an “Unknown Error”.
Will try installing anew.

…and nope, still get an “Unknown Error”. The retry button does nothing… the installer/ patcher just sits there.

Got it sorted. Made a topic in “Technical Support” in case other Linuxers are affected.

Damn you guys been busy huh.

I usually love to be critical(I’m sure sarno knows this by now;), but this is a very very impressive patch:) Cheers.

Can’t wait to try it out. Watching that DL bar.

I just hope there are good movespeed options available for players who want to reroll. Think “wanderlust” boots in PoE. Level 5 requirement - 20% movespeed. That sort of thing. In other words; I hope the movement speed mods aren’t too high of level req. It was really nice to be able to get a character to 50% movespeed as soon as it hit the council. The other mods not so important but you really feel the pain movement speed wise.

Really appreciate the performance updates in this patch. I can run the game on higher quality settings now and not really experience any lag or issues. Excited to see what the beta brings. I don’t think I’ve been this hyped about a game in a long time.

Late to the party T_T

Will be checking the patch out this weekend!

I’ve noticed one issue right away on Linux, there seem to be white distorted patches on the levels. 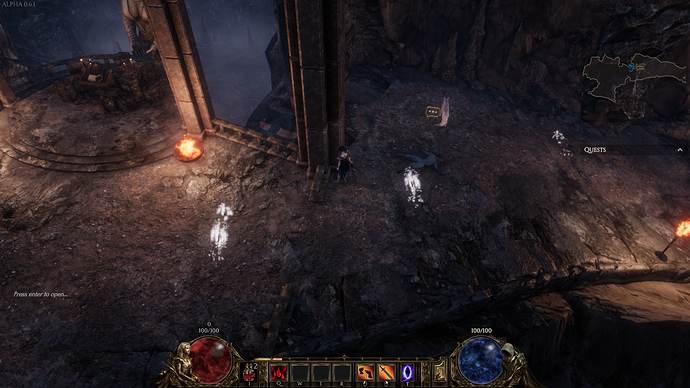 I really love the new Acolyte model ^^
But shop is always empty…it’s a bug?

I managed to download about 150 MB in about 2-3 hours, may I ask how long it took for you all who already downloaded it? It’s stalling most of the time for me. It’s downloading @100 KB/sec for a couple of seconds, then it only says stalled for a couple of seconds and so on. Have 40 Mbit/s line (in Germany), so I don’t know what’s going on. Sarno mentioned it will speed up later on, but I don’t think it will finish before the weekend is over at this rate.

For some reason the server that is closest to germany gets really bad speeds for people in germany. There is another server in europe that provides great speeds to germany but because it’s further away, the system defaults to the slow one.

We are working to make this no longer an issue by getting it to select which server is used based on a quick speed test to find the best one for you.

You can double check to make sure that this is what is happening to you by running a benchmark here: http://benchmark.patchkit.net/

Only 20% done so far, and my result. Pretty sure I saw one that was so slow that it said to me it was offline in the test, ran another test and it didn’t show up anymore, canceled and resumed, but didn’t do anything. Well, was not supposed to be happening today apparently.

I haven’t seen many of the benchmark tests where both the europe servers were fast but you’re still getting slow speeds in europe.

Are you using any sort of VPN?

No I don’t. I tested all my devices, was downloading patches in Steam at my max download speed while LE was running. I don’t get it either. Didn’t have this problem before with your patches and downloads. One of those servers as I mentioned earlier was coming up as offline as I tested it while sometimes showing very low speeds before it changed to that. I’m on-call duty at the moment, but at home, shift ends at midnight, so another 2,5 hours, will restart my router after that.

Just to make sure - can you try specifically closing Steam, then restarting our Launcher?

I started Steam after I started downloading today (it’s not running all the time on my pc), but did what you asked and didn’t change anything. I seem to be the only one with the problem as it seems, a friend of mine also bought this, will ask him tomorrow if he has or had similar problems. Don’t want to bother you guys any further with it.

Much, much later: So i restarted my router and it didn’t do shit, it was just the same. So I re-downloaded the Windows launcher, created a new folder and started again, and now it’s downloading at 4,8 MB/sec. It’s 5,4 GB now, instead of the 3,9 GB before, so my guess is that the actual patching of my previous version was the problem? I was about to try it this afternoon, but just downloading the Last Epoch launcher (about 45 MB, not the .zip-file) was slow as hell, so I canceled it, cause I thought looks like the same problem (though it was not stalling). I should not have done that, because after my router reset I thought screw it, just start from scratch again, let the download of the Last Epoch launcher finish (took about 10 minutes) and as I am writing this, the game has finished downloading, unarchiving packages now.

It’s saved on the same ssd drive, just in another folder on c root, and I was on the latest version before the patch hit.

I patched the game yesterday when this hit, and now there’s another 900mb patch, some new fixes?

I can’t patch,when i start the launcher it gives me “error patcher has to be started using the launcher”