1245k dot attainment!!!
usually dot outbreak of this build in fight is about 200k
I haven’t search posion duration yet and damage in idol/body armour. I think dot will reach 2 million after I finish them 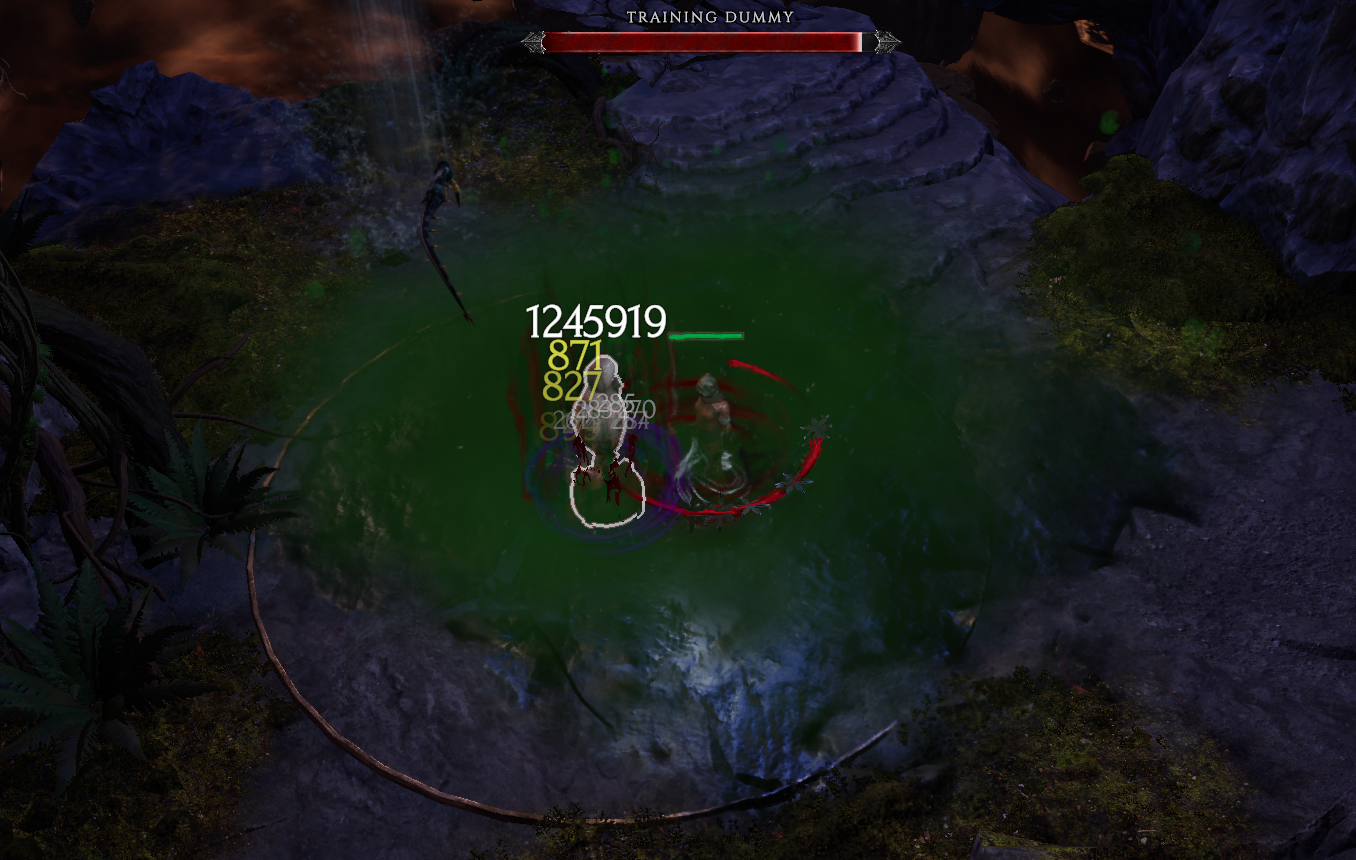 (This build intureduction is translated from what I write in Chinese, so there may be some mistakes)

Build using the new unique gloves Li’raka’s Claws with the passive of dual wield dagger to get massive of posion chance on hit and high number of Shurikens (means high hit frequency) .

By the way, when can I get last epoch with Simplified Chinese

Like the concept idea … will try for the first dagger guy.

So, enjoy the feeling of “melting” everything

You do not use bleeding hearth - wouldnt that be an idea for global leech or do you get leech from elsewhere?

Shurikens’ hit damage is very low, so leech effect is very poor. I finally give up leech and use healing in passive and skill

Thats why i asked for bleeding hearth…

It is global leech not leech on hit … you can leech ~6% of your total damage including DoT.

Well, I didn’t notice it… I’ll try it later. It seems like a good choice

Also running a poison bladedancer build but using flurry, acid flask and shift (with all the auto procs) not decoy and shurikens…

Only level 54 and I am not getting 1.2million but the poison pools & dot is crazy powerful even without the added passives.

I literally run around dropping acid flasks, proc shift and hit a few flurries when I have the mobs stacked and everything just dies…

Obviously have not gotten to the high level MoF yet, but it should be interesting to see how it works when I get to your char level.

OMG wow damage is insane always wanted to try such a poison DOT build.
just started bladedancer gonna try your build in the next days.
would be agree if i put your build on wasted666.com ? i would link it to your forum guide here of course
cheers

Of course yes if you want to do so.

Lvl 54 is still early phase. You cant tell if a build is working at that point. Lvl 100 mono or Arena wave 100+ is where its at

You cant tell if a build is working at that point. Lvl 100 mono or Arena wave 100+ is where its at

Obviously… getting there, just havent had grind time yet… so many builds in progress.

Solid build for monolith farming, you have there, but The lack of range, and aoe seems not a good idea for pushing arena, compared to full ranged dot builds, but looks fun nonetheless. Im testing several variations of my ranged dot setups, in my long range, drop and go, ballista suriken build im at 300k dots with additional pierce to mobs, doing a final build that will most likely reach close to that damage, but good job on this melee version.

Only played a lil so far (lvl 40) like on every dot build without hit damage bleeding hearth works wonderfull.

I will skip the whole shaodw / sync strike part and let my healing be done over leech. Guess skill slot 5 will be smoke bomb than to get all that nice def buffs inside it.

I had story lagon at 5% hp before the “phase” while being only level 50. That thing is brutal.
Having 9 Stars around you that each has ~850% poison chance is broken (and my idols are not maxed and im missing like 50% on passives). You could reach 1.000% i guess. So 90 poison stacks every like 0,3 seconds? (hard to tell how fast the bladeshield is…)

Edit: just a quick idea of a “leech based” setup


Second weapon sufix i have no idea - chill maybe?
And for chest maybe a craft is better option just to get more dodge. 90% leech rate is maybe overkill

The price of damage is extremely small attack range. But I also agree that the ailments efficiency should be nerfed. Hundreds of poison stacks per second is too outrageous.

No good choice for second sufix. Chill is the best relatively speaking.
Dodge base chest maybe better, we can get more health, dodge, dexterity and 100%+ damage increase

On the other hand you loose inc % leech (doesnt matter much really i guess), leech rate and 100% crit avoid.

You can reach like 150% leech rate betwen blessing / chest / passive … so 1,2 second leech duration with ~10% of damage leeched. So we basicly leech ~8% of our damage per second … lets just say: Thats more than we will ever have health - you get a full heal every second as long as you do damage.

So the biggest fear are most likley “Floor DoTs” (you cant do damage to dead things but the floor effect is still there to kill you) and oneshoots.

The later can be prevented with 100% crit avoid in many cases. Or do you see any other way to get crit immun or build up enough “lees crit damage”?

Could someone post a short vid in Arena? Lvl doesn’t matter, really short like 15s would totally do it. Modeled my phys Melee to poison with

I don’t want to give up the little extra range from Flurrie’s Shockwave for extra DPS, at 500k ticks max now with all res maxed against Dummy.

You have a chance to poison enemies with bow attacks while inside the smoke cloud.