So my wearbear build is stuck on the black sun MF because I can’t kill Rayeh: his pizza attacks are too fast to dodge effectively and Rampage is an ineffective ability against it for 2 reasons:

As a general note though, I would argue that Rayeh is terribly designed: in MP games it’s possible latency alone can screw you in this encounter with how rapidly this attack goes off. This was actually a similar mistake that Wolcen made. Alot of their mechanics were too twitchy for how little time they gave you to react in a latency environment.

The other thing I want to comment on is I’m starting to feel too old for gaming and this particular encounter has me feeling that. When I fell that I’m not given enough time to react, it also makes me question If I’m getting to old to play any action-oriented game. I can blame werebear, but I know based on negative changes in my performance on the GW2 Wintersday JP that I might be losing my touch when it comes to refexes and timing. This is relevant because you might need different difficulty levels or something so players can play at a level they’re comfortable with.

I also want to comment that the borders of the ability don’t feel very clear or it feels hard to make sure you’re on the right side. Because they’re happening so fast an effective strategy might be to kite the edge: but the telegraph doesn’t feel clear enough for me to do this effectively.

Another comment: alot of the modifiers in the monolith itself can easily break this encounter in Rayeh’s favor. 75% increased void damage? 25% increased damage? 14% chance to slow on hit? If you don’t have a teleport, good luck!

Greetings.
One suggestion on Rayeh’s pizza attack, stay close to Rayeh. It’s much easier to keep in the clear that way, I’m playing a Werebear also right now and am farming the Black Sun for the shield that never drops.

I also get what you’re saying about the age thing, but I just don’t like to admit it being nearly 60 and still playing these like I think I’m 20.

Rahyeh is one of the most mechanical bosses in LE and it’s crucial to understand how you can deal with certain mechanics the best way.

To help you visualize, how you want to deal with this ability I would like to refer to a video I made a while back, when MoF was still very new and people were complaining about bosses are overtuned and stuff.

Here is a screenshot of what you will see in the video and I highly recommend watching it to understand how to deal with this mechanic properly.
Depending on how much movementspeed you have you want closer to the boss, but don’t go to close and rush into not exploded slices yet. 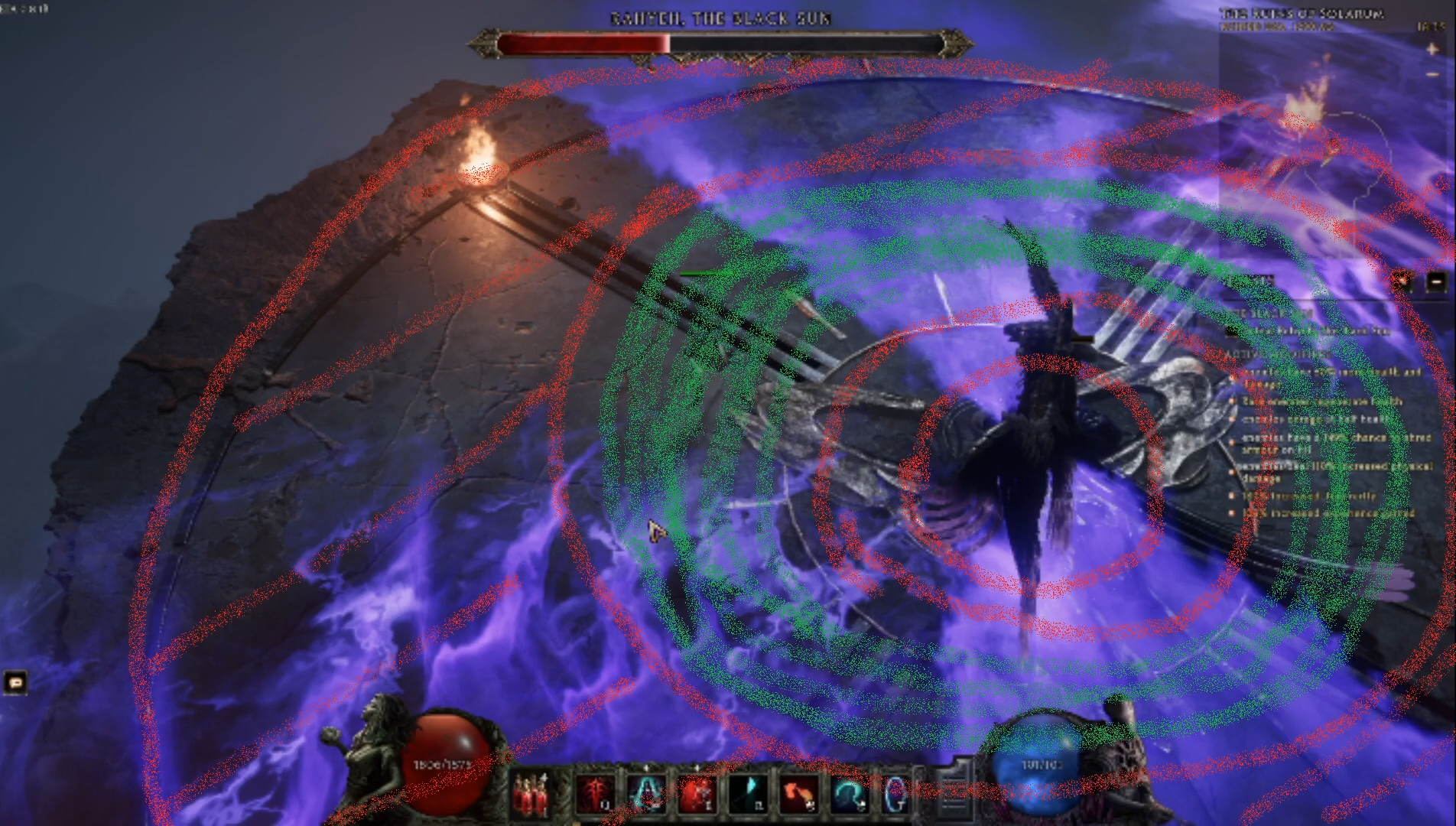 And here is the video with the timestamp for this specific boss, where I explain that specific mechanic, but feel free to watch teh explanation for all other abilities of bosses. 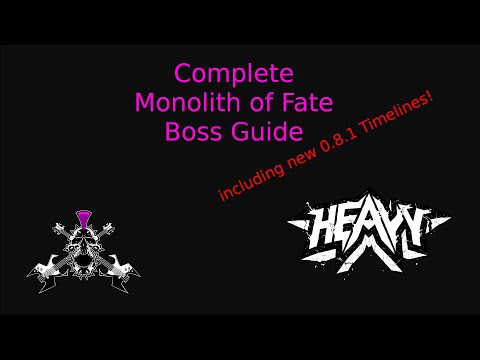 Also regarding the following:

Another comment: alot of the modifiers in the monolith itself can easily break this encounter in Rayeh’s favor. 75% increased void damage? 25% increased damage? 14% chance to slow on hit? If you don’t have a teleport, good luck!

That is one of the things that I absolutely like about MoF, we as players are in full control over all these modifiers.

Finding stuff, that makes particular bosses very hard, or modifiers that are basically not dangerous at all is part of the game mode for me and makes strategizing around avoiding or purposefully getting certain modifiers part of the fun.

A lot of these modifers can even be countered, like slow, chill and armour shred for example with any ailment cleanse

As travoas noted, staying close to Rahyeh during the pizza attack reduces the distance ou have to travel, so you don’t actually need Rampage or any movement ability to dodge it =D

As for the reaction thing… Maybe I just don’t understand, so I suppose grain of salt, but I think the bosses in Last Epoch follow patterns that we can learn to predict, or strategize around. For example, I found Rahyeh’s dive that left that smoke behind him to be way too hard to react too and it kept killing me, so I learned when he tended to use it and where he flew before using it, so I could start reacting ahead of time. I also realized that if I stayed in the center of the room, I’ll have more time to react than if I was on the edge.

Good luck with the fight!

I’ve tried kiting the attack closer and anticipating it, I was still struggling, hence my post. I appreciate the feedback. We’ll see if I get it or not. If not then not sure what I’ll do.

If you don’t already wear silver rings, get two with 8% implicit rolls and stats you can live with (just be sure your void resist doesn’t drop). Swap them in for the fight, and off again after.

Since everybody else avoided this part of your post, I’ll deal with it.

Additionally, part of the “skill” of the LE boss encounters is knowing what modifiers are going to be “bad”. Along with the ones you mention, Frenzy will make it feel much harder. If you’ve got some bad modifiers when you unlock the third quest echo, take a bit of time to do a few other echoes to let the bad mods fall off.

Also, you having chill on hit on your gear will make your life easier.

When I fell that I’m not given enough time to react, it also makes me question If I’m getting to old to play any action-oriented game.

This. Too old or too unhealthy.
This is something that we can understand or think we understand, but it becomes concrete when you’re personaly concerned. When your brain thinks “move” and your arm just shakes a bit before moving, or does not move.

It’s not time for us to stop, it’s time for us to find builds that we can play. Builds witch a cheat death included (Lich), with minions (Necro, Primalist, Forge Guard), with high leech (VK, Lich, Rogue), etc. There are many things we can play, and a few we can’t anymore.

Along with the ones you mention, Frenzy will make it feel much harder. If you’ve got some bad modifiers when you unlock the third quest echo, take a bit of time to do a few other echoes to let the bad mods fall off.

Also, you having chill on hit on your gear will make your life easier.

For this particular boss neither Frenzy nor Chill will do anything anymore.

Rahyeh’s abilities are not affected by cast speed since a few patches, to avoid desyncs and overlaps.

In the limit, Rahyeh and The Black Sun are optional: you can go around them by taking the lower level choice path from Fall of the Outcasts to The Stolen Lance, and then on to Blood, Frost and Death. You don’t have to complete The Black Sun at all if you don’t want to - although it offers many great blessings, so it’s good to get done.

Well i eventually got it. Heavy’s video helped a lot: I think WB is so big, it’s very unforgiving when being too close and I think that I was either too close or too far. Seeing the video made me realize I’m trying to trace that line around the middle, section where he’s standing that place was probably the most counter-intuitive to follow, it still felt like the attack was too close, like I’d BARELY get out of the last one with no extra movement. (i.e. the occultist in his video seemed to be moving faster than me still).

This telegraph may not be so great once MP hits. The latency inherent in online gaming could easily screw someone.

Glad you did it!

But at the end, it will just be coming down to how routined you are.

I am sure if you beat that boss a couple more times it will becomes second nature to just avoid it entirely, without thinking to much about it.

All in all, I still believe that Rahyeh, The Black Sun is one of the most interesting and well designed boss fights in LE.

All in all, I still believe that Rahyeh, The Black Sun is one of the most interesting and well designed boss fights in LE.

That could be, the reason I’m flagging MP is I vividly remember playing wolcen and correctly responding to telegraphs only for the server to not recognize it and failing bosses over and over due solely to bad luck. Wolcen had some pretty twitchy mechanics and any one-shot mechanic (or something close to it) is testing latency as well as your reaction times.

That’s not to say they shouldn’t exist at all, but it’s something the devs should keep in mind as they design encounters. If you like reasonably challenging encounters, Black Sun Rayeh is fine as is. But MP and the latency it will bring can easily make it untenable. I was BARELY able to follow the telegraphs as-is with none. I’m sure even 40ms would have killed me.