Hello, this is Dr3ad from Epoch Builds, in today’s forum topic we will go over Phys Warslash Warpath Void-less Void Knight, a fun use of that leviathan carver thats been sitting in your stash.

So when patch 8.3 came out, it had a lot of changes to sentinel skills. Warpath was one of those. It was changed to have much stronger void and fire support, while they forgot to add physical damage support anywhere. That was kinda sad, as one of my favorite builds of the past was 2h Phys Warpath Forge Guard, and I attempted to revive it this patch with middling results. But after a lot of testing and theorycrafting I came up with this idea.

Warslash was added this patch, and it allows you to channel Warpath for 5 seconds to release a big semicircle slash, which gives you more damage and area per second of that channel, and it is fun to use. The main problem with it, is it completely goes against what warpath is meant for, to spin endlessly. Stopping to cause a Warslash was just bad because it means you weren’t spinning, which is the biggest strength of warpath being the immunity to stuns and being able to move while dealing damage. And this lead me to believe that Warslash was very bad. It is still very bad by itself, but when combined with another node in the tree it becomes much more.

We also have the echo node, which allows our warpath to echo behind us. The problem with this node is the echoes don’t move to targets, making them useless against enemies that just walk out of the warpath, and their spawning condition is rather annoying to implement normally. But did you know that the little warpath echoes can warslash too? That’s where this starts to get spicy. Since every little echo can warslash, it completely negates the biggest problem of warslash i.e. not spinning constantly, and since the warslash can deal a large amount of damage in a large area, it negates the issues of the little echoes being useless. This combo allows us to make our memes become reality.

Now with the way warslash scales, it doesn’t care about attack speed, and we don’t care about critical strike chance much thanks to the 10% base crit in the tree for warpath. What weapon type does that leave us with?

Leviathan Carver is a unique that was also added in patch 8.3, as with its 210 flat physical, 280% increased melee phys and phys penetration, it makes a decent weapon. The biggest problem with it for warpath normally is the .76 attack rate on the weapon is rather punishing, but thanks to the fact we are proc’ing warslash and not actually attacking with warslash, it means we get all the benefit of the sword and none of the downsides, letting us get some beefy Warslashes.

All of this combined with the cherry on top, since we are so focused on phys damage, it lets use invest heavily into armor shred, as it is best with physical damage. And since our little echoes echo in place for about 2 seconds, even though they have less attack speed because of Leviathan carver, it means we still get large amounts of armor shred.

So normally this is where I would post a leveling guide, but since Leviathan Carver is a rare weapon to find, and the gearing on this build can be expensive due to requiring a +2 to Warpath to function, this means I cannot recommend you to level as this build. But there is an amazing build on the channel already that is Warpath VK, and will carry you until you can respec into Warslash Warpath.

VK Warpath (Level with this and play until level 80+ or until you have a +2 to warpath and a Leviathan Carver) : 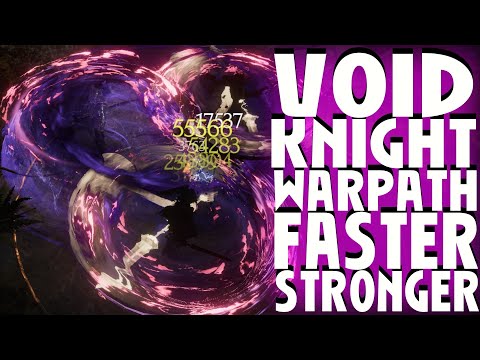 Pastebin.com is the number one paste tool since 2002. Pastebin is a website where you can store text online for a set period of time.