Hi all, I’m currently trying out spriggan forms vines, I’m only low level, but the boss damage is legit so far, so am wondering if people can answer these so I don’t have to grind out a whole lot of skill respecs to test them:

If all this works out, it seems you can have a very high mana, high life, high endurance druid that can spam cast super high damage vines (attunement scales poison chance and damage on them), recover endless mana via the belt and the thorn totems, who also has lots of healing effectiveness and healing sources. It may also scale well with boots for ward on top. Cheers.

I have an optimised setup with Vines and Spriggan Companion at nearly 97. ive posted my setup multiple times, if you care you can check my post history

If you are playing an attunement stacking minion damage stacking build theres no reason to NOT take Spriggan pet since you have almost no skills anyway. I had Werebear on switch but its nerfed now which also means Entangling Roots is not used anymore

but yes this build is strong with 700hp per second from healing totem depending on attunement, tonnes of damage, healing aura from Spriggan, good mana recovery but not infinite - but has no movement skill

Petrify is the node that converts 50% of mana costs to hp, disables hp regen and pushes you back to human on hitting 30% hp.

The Spiked Totem node was bugged where you wouldn’t get any healing, not sure if that is fixed yet or not.

Yes you will still be able to be healed from spells (and totems) when you take Petrify, it only disables your own health regen. (im not a fan of this node tho, as i dont find mana a problem) 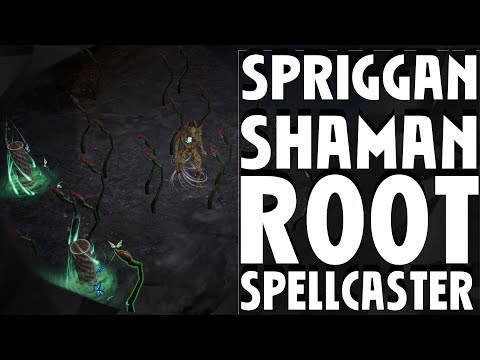 Do the primalist idols casting maelstrom use your mana when casting? Do they use the maelstrom skill tree or the generic version?

I agree with @Shrukn that its not worth taking as it will drain too much mana (even if specc full in mana efficiency node).

The Spiked Totem node was bugged where you wouldn’t get any healing, not sure if that is fixed yet or not

Thanks all for the help, testing is going well!
The synergy between attunement and all these things is wonderful:
At level 66, with 150% healing effectiveness, 50 attunement, 400 mana

Gearing has been fun because there are so many stats that are useful (I’m testing ‘moenia mentis’ shield for some ward on block, though I cannot see how this will ever be good: every 5 hits I get 40 ward…

The playstyle is very satisfying. I have 2K life, 1200 armour, 40% endurance and 600 endurance threshold, so it’s forgiving if you stand in a circle of death that would oneshot alternate ‘defensive’ builds. Clearspeed is slow, but consistent, there is AOE from the thorns piercing, and a satisfying means of ramping up damage on the super high HP bosses.

Arenas are where the bug really hurts - you can spread out 100 vines, monsters run in and only a fraction of them are hitting anything, the rest just stand there, limp.