Triple Poison Beastmaster: an early guide to an Unreal Hero!

[Note: The name of this thread is an homage to Shtrak’s awesome “Real Hero” series. You really should read it, it is great!]

The story: I wanted to try and use the “Draalsting” unique spear, sitting in my stash for ages. Serpent Strike was a logical choice for it. But what else?
First I played around with totems (I really like Thorn Totem), but mixing it with Serpent Strike felt clunky. So I thought some more… And I came up with this absolute monster. Possibly my strongest build so far!

Without further ado, I am proud to present
THOXIC, a beastmaster from the wild north, specialised in poison.
Here he is, just after he totally obliterated Majasa (despite bad gear and low health):

All the campaign was a complete breeze. It is still early days, but dps is off the charts, superb survivability, and very pleasant to play.
Some explanations:

Note about 5th skill:
I chose Eterra’s Blessing because it brings huge survivability.
But if you have good gear and feel confident, both Warcry and Frenzy Totem are great options, and can support your minions very efficiently.

That’s it for today, thanks for reading and have fun poisoning things!
Maybe we will hear from Thoxic again after he grows up a little bit…

Bleeding Heart: not even sure I need it, leech from tree could be enough. Or I might try and craft some good Living Seed (relic with leeching implicit) and replace the amulet by a minion-supporting one. We shall see.

Have you thought about Serpent’s Milk? It’ll make your minions apply a lot more but weaker poisons which will stack the resist shred more quickly buffing your own poison damage.

Thanks Llama, good idea.
I will give it a go when I reach the required level.

If you do find it useful, you could take some of the points out of Noxious Carapace in the Scorpion tree since the Scorp’s poison damage ill be minimal ~& you could try nodes like Acid Lob, Deeper Puddle & Pus Sacks.

Very interesting.
I’ve always been interested by Draalsting, but reluctant due to its reduced attack speed.
I have one only Beastmaster left, and I don’t want to respec him. I’ll have to level a new one to try this.

The Healing Totems in Spriggan and the ones in Eterra’s Blessing are probably not the same.

They aren’t, the healing totems from Eterra’s Blessing are unaffected by any Spriggan Form tree nodes (such as Ire of Trees).

Awww, too bad, the double synergy from Spriggan tree (vines and totems) was sexy looking.

Doesn’t matter much anyway, the only node I was taking was Guardian of Nature, and only because there are only 15 points influencing the vines and I have no use for the remaining 5.

But they should find a way to clarify in the toolboxes for all these interconnecting effects, at the moment what connects and what doesn’t seems to be sheer guess work (and extensive testing I suppose).

Edit: I edited the main post to remove totem/spriggan interactions.

That’s what they are progressively doing, by renaming several elements.
Skeleton Mages became Sekeletal Mages in order not to be confused with Summon Skeletons, for example.

Doesn’t matter much anyway, the only node I was taking was Guardian of Nature, and only because there are only 15 points influencing the vines and I have no use for the remaining 5.

If you take the passive that procs Thorn Burst when hit (Thicket of Thorns), you could put points into the armour buffing nodes in the Spriggan tree (Ironbark, Deep Roots, Eterra’s Bulwark & maybe Bulb Growth) for more armour. 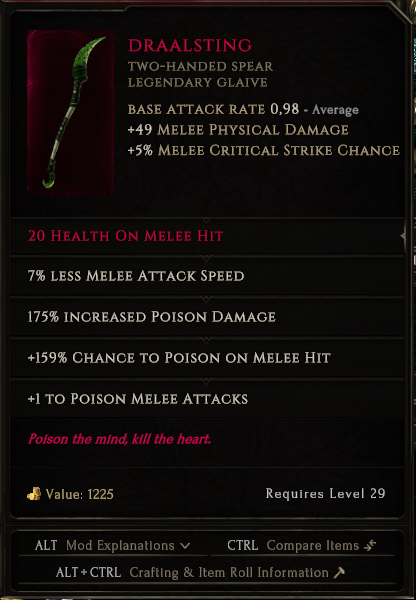 There were some nice affixes…
It’s the only time I leave a T4 affix and it’s this precise affix that lands on my Draalsting.

Here’s my only current attempt at a poison build.

It works well, but it is rather slow and a bit boring to play.

a bit boring to play

That’s probably because swarmblade is not very pretty.
If you go for druid, being a bear is mandatory! I love being a bear!

If you take the passive that procs Thorn Burst when hit (Thicket of Thorns), you could put points into the armour buffing nodes in the Spriggan tree

Oooooh, maybe I could get Barbed Thicket and get it to affect my vines as well, increasing their damage.
I wonder if that would work.

And sometimes we fail.
I’m currently leveling this:

It works very well, he’s just wrecked the Wengari couple in Heoborea, but I’m already bored. I’m a victim of the another-idea curse. I have another idea I want to play.

Ah ah, same for me, as soon as a character reaches 60-ish level, I completely lose interest and start another one.

I call that “diminishing returns”: what I like is building skills, making meaningful decisions and see my character evolve.
Once all the mechanics are in place, I could become more powerful, sure, but it will always be by using the same skills and pressing the same buttons, no real changes anymore. Boring.

There are so many other paths to explore!

Strangely, of all the games I have ever played, the only one that got me interested in endgame was PoE. Not sure why.
I think because the maps are all different I wanted to visit all of them. And the completionist in me didn’t like blank spaces on the atlas screen.

In GD, Diablo, LE, and every other, I love playing the campaign with different classes and skills combinations but I have no interest in endgame.

Strangely, of all the games I have ever played, the only one that got me interested in endgame was PoE. Not sure why.

I was not even able to finish the campaign, I got bored before, so I gave up.
I played a lot of Diablo 3 endgame, but I tried again recently and was not interested long enough.
I also tried in Van Helsing, but it did not last long.
Here, it depends. Sometimes I don’t want to hear about the campaign, and most of times I’m all about building something.
I hear Wraiths calling me…

I see your Draalsting and I raise you my T6 Attack speed Lethal Concentration.

Ah ah, very nice, congrats!
Although I went into this build specifically because I wanted to try Draalsting, it would break my heart to stop using it…

Yes, just try to craft one with Attack Speed, it’ll change your life!

And here i through i was the only one trying to build some poison BM cause it rocks !! like there is more than one way to build one for now im trying this:

I used spriggan for survability And yes this is a full minion damage build im here just to apply some serpent strike to invoke more little minion that will apply poison !

For now (i should precise that im not at this stuff level yet…) i have absolutly no pain clearing map … the minion are verry huge almost instantly depoping packs of mobs… Im trying to push this build and see what work or what dont but one thing is im pretty sure the stuff is on point ! we can do some Idol/blessing adjustment i think but thats it… The big change will come from skill tree and passive tree where im still trying stuff