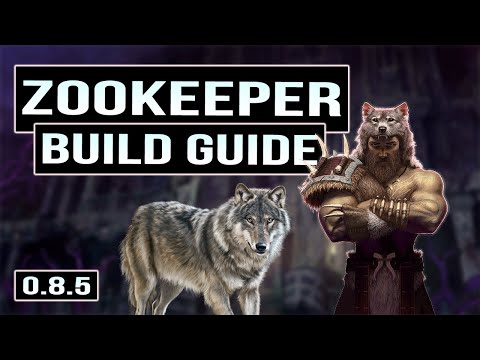 It’s a straightforward build really, but very satisfying, because your minions crit a ton, and it’s fun and engaging to play.

Thanks to @Llama8 for the help on the forum tags below.

I spent at least 30 hours grinding it out, levelling to level 97, plus the additional time writing a guide and recording and editing a video. A guide like this easily takes 40 hours to make, which is why I don’t release so many of them. Once again, I had a lot of fun creating this build, all the way from scratch to finish. I do hope you enjoyed the video. If you did, give it a like, toss a sub to the channel because I create more extensive guides like this, and finally, thanks for watching. See you soon, love you all, bye bye.

I’m wondering why you don’t take Hunter’s Emanation in the Primalist tree; I figured the additional 11% minion damage would be a very nice bonus without sacrificing much health. Would love to hear your thoughts!

Great guide all around, and I look forward to seeing this Beastmaster ruin wave upon wave of enemy.

ye you could take that node sure. I’m at a point at lvl 97 (see the planner) where I just don’t need any more damage, so I am taking all the survivability I can. It’s a good node though, so take it if you want.

Just a quick post to thank you for this really nice build and all the hard work you put on it.

Could You explain why you take 1 point in Circle of Life and 8 in Ocean Maw? This really doesn’t make sense to me at a glance. You have only 5% chance to trigger it (since only 1 point in circle of life) and ONLY on kill. To get a buff that gives melee dmg and atk speed for 6+ seconds.

And you don’t take the Dragon Slayer node so it doesn’t work against rares and bosses at all. What’s the point of spending the points here on those specific nodes?

if it was using Feeding Frenzy to stack Shark, then I would expect a different setup to proc Shark as often as possible to get the stacks up.