I finally decided to make a deep (and updated) guide on my Lich build.
For those who might not keep track or just don’t care about the beta Ladder, I have been Rank 1 for the last 3 months with this build. During this time, I have played most of the current meta builds and pushed with them at least 500 waves in the Arena, so now I have a better perspective on how the build compares to other playstyles.

My current record with this build are 1389 waves in patch 0.7.7F
Here is me dying at that wave xD

This will be a very extensive and deep look at the build, hoping to help others have fun and learn from it!

A bit of history:

In 0.7.6 I reached Rank 1 with the original version of this build with pretty bad gear. At the time, it was in a very OP state and requiered no gear to perform (Keep in mind the Arena was also easier back then). The build had to be heavily modified after the huge nerfs and bug fixes to both the Acolyte Passive tree (lost 20 Inteligence), the Ward Retention Idols (from 10% multiplicative to 5% additive) and the Soul Feast Skill Tree for 0.7.7.
To give you an idea of the impact this had, my Ward Retention went from 750% to 450% witout any gear changes from 0.7.6 to 0.7.7.

Due to this nerfs, the build requiers a different approach, very good gear and the most insane micro and critical positioning I have experienced in LE. The build can achieve more than before but player skill and gameplay are a huge part of the success of it. It is very volatile, but extremly fun.

I will start with the skills as they should be the first thing you understand and focus on, as they are not affected by your economy, experience or gear.
The 5 skills trees that I am using are:
Skills

Drain Life:
New skill added this patch, replaces RIP Blood from the previous build version.
This skill single target damage is insane and will be mainly used for boss killing.
Remember this skill is a DOT and will not hit or apply any hit effects from items or passives. With the conversion to poison damage it will however benefit from all your global % DOT and poison damage bonus. This puppy hits hard.
The skill also adds good utility and control with the 100% chance to slow and the reduced Health Regeneration from the Damned stacks.
Positioning this hability in the right spot (normally chokepoints) is quite important on harder waves.
This hability costs no mana but has a very short CD, so its ideal to use in between your mana costing habilities to keep your DPS up without affecting your mana flow, but keep in mind that if you use this skill to kill everything too fast, you won’t be able to make ward from enemies that are dead.

Soul Feast:
This is the core skill of this build. It is a hit so its also our main source for aplying hit effects from items. Oh, also it has global range!
The current build casts manually this skill every single time. Every time you cast it, your character will stop in place. For this reason, kitting is extremly important. The better you kite, the better you will do with the build. With good mechanics and enough movement speed and cast speed on gear and passives, you will achieve a “moonwalking” playstyle that is very micro intensive but its very strong and fun. This playstyle allows you to generate more Ward than ever before, but mana management is a factor you will have to learn and play around. Learing how many times you need to cast the skill to generate X ward and do X damage requieres quite alot of experience to do efficiently, but its quite rewarding.
Finally, the Chill effect applied with this skill combined with your other sources of control is very strong.

Mark for Death:
Insane damage boost, insane control with the Silence and no CD.
Silence is the strongest CC the build has but enemies can only get Silenced once. Learning who and when to silence is quite important as you can use it to interrup attack and skill animations of enemies. A good timed silence will save you on a hard wave.

Wandering Spirits:
Huge damage boost, at the cost of mana.
It is a great instantcast skill, just make sure you cast it at the right time to not screw up your mana flow. Don’t underestimate this skill, it can clear arenas waves alone.

Transplant:
Great blink with a base 4s CD. Can be used as defense to flee, dodge and reposition or as an attack for damage. Each of the explosions apply hits so it can really help you stack poison (and bleed) stacks on Bosses. Once you get confident with the build, aggro dashes will speed up your clear times by a mile.
The main use of this skill tough, is to generete mana. Use your mana cost skills, transplant, repeat. Make sure your mana flow is in harmony with your Transplant CD, so you are always casting something.

Here is some gameplay of the build using the skills at a high performace level. This was my second attempt at Rank 1 this patch and the first one with my new gear:
Gameplay

Here are my passives:
Passives

Pretty straight forward. Get all the Intelligence, Ward Retention, Cast Speed, Movement Speed, Poison and DOT damage nodes you can.
We are going to be a Low Life Lich, so grabbing “Dance with Death” and “Hollow Lich” will give you tons of damage.
Special mention to “Unclosing Wounds” and “Mind over Body” as they will synergize with your Exanguinous unique chest piece armor, giving you more base Ward as they lower your HP.
“Elixir of Hunger” is also very interesting, as it will also synergize with Exanguinous when you use a potion. It will give you a massive boost on Cast Speed (DPS) and Movement Speed (Kite) for the price of Ward (as you will heal up from Hunger and lose Ward in consquence). Again, really volatile but fun.

Here are my stats: 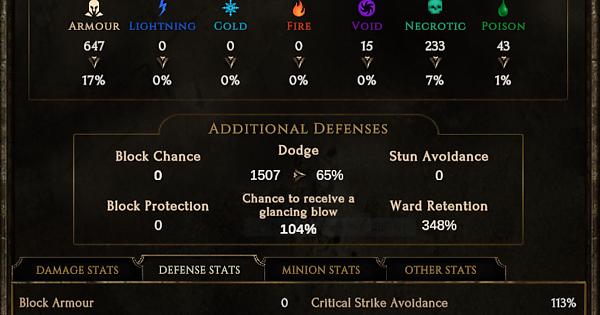 Max your Crit Avoidance before you go for top tier Dodge Chance. The goal is 70%+ dodge while keeping the 100% crit avoidance and all the stats listed above. Idealy you also want as much HP as you can get, a bit of extra Mana won’t hurt either.
The Movement and Cast Speed are important to kite, the more you have the smoother your gameplay will be (and more DPS output potential).

Here is the hard part… My current gear:
Gear

Here is what you should aim for and why:

WEAPON -> UNIQUE Plague Staff
Prbably the best unique weapon in the game. Insane poison damage.
Blind is also insane. There is alot of confusion about this mechanic, I was very confused myself. After asking the devs, I can confirm that once a ranged enemy is affected by blind, the hitbox they will aim at with 100% of their projectiles gets bigger (x10) , so they end up missing you (indirectly buffing your Dodge Chance vs renged enemies big time).

HELMET -> UNIQUE Boneclamor Barbute
Insane Intelligence and Dexterity when max rolled, plus ward generation.
Your idle ward goes crazy high with this.
Ward difference with and without the helmet

CHEST -> UNIQUE Exanguinius
You need this.

The crafted items are the hard part. Using so many uniques makes the crafted gear very hard to come by. You need very specific alocation of stats, or the build will not survive. This gear is extremely hard to get as it needs many T5 rolls and very rare affixes on specific items.
Keep in mind all the Uniques I am using here are best in slot, but if you can’t get gear that meets the requiered stats to survive, you might want to replace some of them until you can run them all. You don’t need this to have fun with the build, but you need to get close to it if you expect to push top Arena.

2 18% Transplant CD Ornate idols with 40% chance to gain Ward when hit.
4 %HP plus Flat HP Stout Idols.
Getting your HP from idols and Dodge from gear is better, as the values are way better. The Transplant CD idols will bring the CD of your skill to 3s from 4s, very good for Mana regen and movility.

Final Notes:
This is not a begginer build.
While this build can reach really high ward against density (my maximum this patch is 250k ward) and look ridiculous, most of the time your ward will be close to idle, so you are a glass cannon. One mistake and you are dead.
It is very important to raise your idle ward so you can start waves with the highest ammount you can, and having a good Ward pool for fighting Beatles or Eagle waves and not get one shoted. You will run around at wave 1000 with 3k Ward and at that point a simple minion will murder you.
While Intelligence is nice, it is not core for gear on the Lich, as all your damage comes from poison and it doesn’t scale with Inteligence. It is better to stack HP and Dodge to increase your idle Ward that getting a bit of extra Ward Retention than won’t help you when you fight hard boss waves. I only build Inteligence on slots I can’t get something better.

Thank you all for reading,

I really like that you dive deep into the build and explain the decisions and mechanics as well as the playstyle. Nice guide and very interesting to read.

Great job sir, I appreciate this <3

Shame that the build lost all of it’s bite in the nerfs. I recently rolled a Lich and farmed the act 1 boss for a couple hours for an Exsanguinous to turn this into a monolith-machine. My computer lags way too hard with the Wandering Spirits, I was hoping maybe the sheer power level of this build would carry me far but it seems like it’s become more a product of your skill as a Lost Epoch player than the power of anything in the kit. Not sure if it’s worth playing Lich anymore if it lags so hard and dies so easily for little upside but there’s always buffs to wait for I guess.

But before all that I want to thank you for this truly excellent guide!! Fantastic quality, you rock and deserve all the praise you get!!

Thanks Lizard, guess I’ll have to give Lich another shot this patch!

Thanks Lizard. Love this guide. Now to give my Lich another try!

Massive appreciation for this, Lizard. Truly, impressive work, detail and communication. I had one small weapon question and then found this guide - overblown. Cheers!

Very nice guide, I should have discovered it before!!!
Really appreciate the work!
Also I may have miss it, but with witch version of the game it was written?

Did something drastically change? Drain Life now costs a ton of mana even if specced to cost Health. The node that makes it a cast instead of a channel causes this. Kind of makes Drain Life useless with this spec as it costs 95 mana per cast.

Yes, there were many changes made to the Drain Life & Soul Feast skills used in this build. Check the 0.7.8 patch notes in the ‘Skills Balance’ section to see all the changes.

Also, you can listen to Boardman and Lizard discuss all the skills of the Acolyte in this video. If you focus specifically on the Drain Life & Soul Feast sections of the video you can distinctly hear Lizard’s spirit being crushed, as they bring up fond memories of this build.