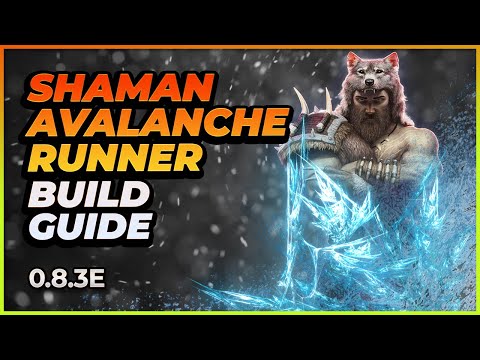 Let me know what you think and if i can improve

Hi Boardman! Quick question. Through most of the video and the build you have Thorn Totem on your bar but around the end of the video when you start talking about how you play the build, fighting the dummy, you put thorn totems on autocast along with avalance and ice thorns But you change out Thorn Totem on your bar for Storm Totem which you say you cast when you want to. Now I know of course that you aren’t putting any skill points into Storm Totem but how are you still using Thorn Totem, even on autocast, when it’s not on your bar? I have heard that it is possible, I just don’t know the mechanics of how to do so. Would you mind explaining how to do that? I understand how to autocast. I found out from chat in the forums. I just don’t know how to autocast and take an autocasting skill off the bar and put something else in it’s place and the autocasting ability still work. I would greatly appreciate the help.

As a side note: I have the two Halvar’s pieces you mention but not the staff. If I happen to find the staff, would you suggest using it too?

In the video, I am never autocasting thorn totem. It would be way to expensive
At all times it is only being proc by use of an idol that has % chance to proc thorn totem on any hit you do (in this case avalanche + ice thorns)

You do not have to have thorn totem on your skill bar to proc this way, so i placed storm totem on the bar as a 6th totem that can give benefits such as % increased spell damage and % increased phys+ elemental resistance

You can indeed use the staff, but your critical strike chance will go down a bunch. Using the 3 piece set is possible and i Have a build on it here: 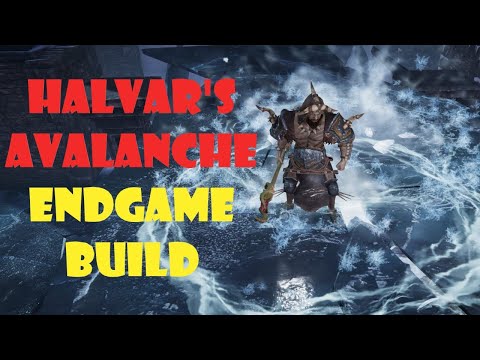 Thanks for the reply. Sorry for the delay in response. I had to take my wife to the hospital and although we got an exceptionally great (I forget the term) message from the doctor, it took all day and into the night. So I am finally back lol. Anyhow, I remember you said autocast Thorn now. I must have misunderstood what I heard on the video. I played it back a couple of times because I thought I was hearing it wrong lol. I guess I must have been. It makes complete sense now. Thank you again. I look forward to playing this out. I have been wanting to all day.

Oh no worries. I watch it myself and at 14:05 I say i put thorn… i mean frenzy totem on autocast.

So i do correct myself mid sentence but perhaps i should have just edited that out. Sorry for any confusion

Lol, no need to apologize because you did state early on that Thorn was cast by the idol. I knew that and it just didn’t mentally catch. I was rushing around and at the same time waiting on my wife to get ready for the doctor lol. The idol cast is a brilliant idea by the way.

So I’m guessing yes but since I am putting points into Thorn, should I use it on the bar until I locate the idol? I have a Ton of primalist idols but haven’t run across that yet. Does it drop after a certain level?

Just gabbing with an update on how things are going lol. Actually very well. I already had Orchi’s (abreviating) Petals as well as the two Havard’s Stand pieces as well as Frozen Ire (the ice sceptre) so once I hit my 30+ time things got a lot easier and 40+ way easier. I am currently 48. I followed the video at the top and put my passive points into Druid, then Beastmaster, before Shaman so being level 48 and doing every quest possible and completely wiping out maps (I am a completionist lol), I still have 10 more passive points until I get Avalance. Since Strength and Physical Melee isn’t a required stat for this build and Attunement is, instead of using melee pets I have chosen to use keep Thorn Totem off of my bar completely (way too much of a mana spender without the idol, which I am hoping makes it free), and I put Storm Crows in it’s place. I did not upgrade the skill but kept it plain. Also, since I am not using Thorn Totem on my bar because it literally drops my mana into the negative (it comes back fairly fast but by the time it’s back I already am in need of it again), I chose Not to get Frenzy Totem Until I get Avalanche at the same time. If I had chosen to go for Frenzy, I would have been left with primarily Ice Thorns as an attack as well as defense and in that case I would need it to fire faster so that’s a no go. Instead, I use this set up: Warcry, Storm Crows (because of very high attunement and the okay strength from the passives making them a decent pet with lightning which is boosted by the Stormhide paws which boosts cold damage and lightning damage by 41%), Ice Thorns, Tempest Strike (as my melee used in it’s basic form because it uses attunement, cold, lightning, and strength, spell and physical (so it meets both requirements for both Havard’s set pieces to fire off their skills), and lastly as my totem to keep my resistance Way Up I have Storm Totem. Now Storm Totem, I have chosen as a primary skill until I get avalanche. Once I reach 50 in 2 levels, I will get Frenzy Totem but for now I have activated both the Blizzard and Frostbite and Thunder Totem for Storm Totem.

I drop Storm Totem which boosts my resists as you mentioned and does a ton of damage, then start hacking with Tempest Strike to get Havard’s to fire off possible and wipe most trash in one strike. If I face a boss or heavy healthy rare, I also (of course) use Ice Thorns for defense as well as use Warcry for the extra crit (which is at 200% now and doing close to 1000 damage per use).

It’s working pretty well so far. I wanted to also say that you have my heartfelt gratitude for helping me understand the Loot Filter. You probably noticed my posts and confusion on it so thank you. I have been using your loot plan and it works like a charm.

For a shield, I have been using Soul Bastion, which we know, causes Marked for Death on me too almost all the time because we slaughter whole screens of mobs. Luckily being almost level 50, I have a purple shield with 30% chance to block and 1,653 block effectiveness (thanks to the Tier 6 affix). I can use it at level 50 and plan to switch to it after level 50.

I do like the idea of a catalyst but I haven’t found a decent one yet. I am certain I will find one in the gameplay at some point. Once I hit 50, I am going to try to forge the shield’s block chance a bit higher. The instability is not bad at all right now. The only other affix on it is lightning resist and if need be I have a unique that boosts my mana regen by 1% for every 3 extra lightning resist beyond 75% and it’s maxed without the totem. Laying down a totem would cause my lightning resist to go through the roof plus this shield has 19% resist so my mana regen would get a decent buff as long as I have a totem up.

Anyhow, I am having a lot of fun with this build. Thank you very much for all you do.

Although I am level 55 and have yet to find a Thorn Totem Idol (I know I will eventually), I have found several Idols which give a percentage for Ice Thorns and finally found one that gives 15% chance to fire off Maelstrom every 5 seconds. Just because I had the open slots, I decided to use the Maelstrom and it does use my mana.

Will the Thorn Totem idol use my mana as well? If so, that will eat up a ton of mana. That doesn’t bother me but what would you suggest as a remedy for this? My rings and amulet have my elemental resists and physical resists built into them to top of the totem resist. I am using Havard’s for my boots and relic. I can always upgrade my rings and amulet eventually. They are the turquoise rings meant to boost minion damage which I figured would boost my storm and eventually the Thorn Totem damage. I am using Frenzy Totem now and no pets. I am two passives away from having Avalanche.

Ps. Since I am 55 and am in need of that Idol, would you suggest going ahead and hitting Monoliths soon and going for Idol runs after I have Avalanche?

Thorn totems summoned by idol procs do NOT consume Mana. Yes if you wanted you could go straight to monos and do some idol runs

Thankfully you can ignore my last questions lol. Instead of going after Lagon, After reaching his Island, and even his Sanctuary, I managed to gain Avalanche at level 56. Somehow I had an extra passive point that I hadn’t noticed and it gave me just enough. So I went into the Monoliths thinking to hunt Idols only to find not a one idol island. Thankfully Lady Luck was with me and I found one 9% chance to summon a Thorn Totem on Hit Idol on on of the early islands and found that no, it costs me no mana (for those that are reading). I’m not certain why the maelstrom idol did cost mana but it did each time it fired off. Anyhow, trailing Avalanche behind me with Thorn Totems in tow I am destroying everything so far in the early islands. I’ll let you know how Orobys goes when I eventually hit him but I think he will be my only, next concern.

For people new to playing and who may be wondering about if 9% is a low chance for Thorns to fire off… Avalanche fires many, many boulders rapid fire in an area hitting pretty much everything in a huge area. Size wise, once you get your Frenzy Totem’s tether to it’s full size you will see it’s boundary with a yellow circle. I have hit everything inside with Avalanche from the center. That 9% goes off with almost every cast of Avalanche. It’s almost a guaranteed triggered effect at 9%. At least for me, and I have been through 5 more monoliths since finding it.

I just wanted to note that if this is a Rank A build, I really have to try a rank S all the way through once I find one that matches a play style I like. I am loving this primalist. He is crushing (note the avalanche) everything. I have yet to find more than two avalanche affixes on items and shattering those yielded nothing. Also, with no casting speed upgrades, Avalanche has not stuttered hardly at all. It has not affected battle or running around the maps easily. Thanks again for a great build.