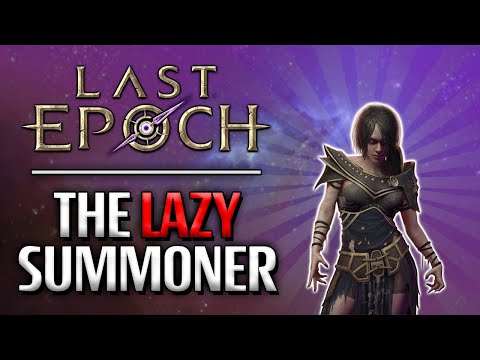 Hello lovely people, Thyworm here with a build guide for Last Epoch Patch 0.8.3C. I made a Lazy Summoner, meaning you don’t have to press a single button.

You can find a written guide, this script, on the forum. The build is available in the Last Epoch Build Planner. See the description for all of this. If you enjoy content like this, consider liking or subscribing, it helps out a ton and I really appreciate it.

Let’s start with the build philosophy

This build is an attempt to see how well the permanent minions work in Last epoch these days on a summoner. The devs specifically stated in the patch notes that they want to push the archetype of a summoner with permanent minions, so I basically took that to the extreme and see what you end up with. Lo and behold, some of the footage. And if you’re thinking, that’s really not all that impressive, you are correct. But it’s not bad either.

I’m using 5 minion skills and made all the minions permanent, which means for example I don’t have a movement skill. It also means you have a severely limited number of minions, because you need to fit in the Abomination, which ultimately hurts DPS quite a bit. Still, I managed to clear several empowered timelines with 100 corruption and I made it all the way to level 95.

The build is decent doing the monolith. You see some empowered timelines here. You can just run to the target and the minions kill everyone along the way. It’s a very lazy playstyle, you can play with one hand, and the only time you need to do anything is when minions die. This doesn’t happen very often, because I made the minions tanky. Boss damage, single target is definitely not amazing, but how often are you killing bosses anyway.

In terms of defences, make sure to get res capped of course, and get 100% crit avoidance. The blessings in the monolith can help a lot here. You want a bit of health, and I’m using a shield with 45% chance to block, which mitigates a lot of damage. Mana isn’t an issue, you’re not casting anything after all.

Most important are your minion stats of course. Give them health, damage, and some dodge. I have a bit of a fire theme going, so I got some fire damage idols. And I went with crit and crit multiplier for minions.

I’ll make a few highlights in the skills, but you can see everything in the build planner yourself. I have a few extra skill points here and there from gear.

I’m starting with Assemble Abomination, because he’s the reason we’re making other skill choices as well. Because we’re going with a permanent minion build, we need to make our abomination not decay anymore. The node Age of Undeath does that for you, but it has quite a few limitations. Your abomination can only be built from skeletons and mages, and if you control 6 or more skeletons or mages, the abomination starts decaying again and dies. At first, I tried building the abomination as a damage dealer, but eventually settled on him as a tank. Repugnant Presence gives him a lot of threat. I’m taking leech and health and the result is a very healthy, tanky boy, that easily tanks bosses and keeps aggro away from you and the other damage dealing minions.

On to summon skeletal mage. Remember we can only have 5 skeletons and mages in total. So I’m going with the node here that gives me a single big mage, Archmage. In the bottom, Celer Mortis and Grey Merchant give them a lot of crit and crit multi, and I’m turning them into fire mages to scale with my minion fire damage idols. The fire archmage has 100% crit.

Then the regular skeletons. You need to make sure you have no more than 4 of these, and there are many ways to get additional skeletons, by using this skill tree, by using passives or by using gear. Dread Phalanx is a mandatory node here, to make the minions stronger and cut their numbers in half. I’m turning the skeletons into archers, to scale with my unique wand. I give them fire arrows, to scale with the idols. I give them all the crit I can and they’re almost crit capped now. It’s around 80% crit. The rest is mostly attack speed and more damage multipliers.

Let’s look at the bone golem. Once again, a fire minion. I’m taking pretty much every fire node, which means the golem has a big fire aura and I found it does a good job in cleaning up bigger groups of enemies. It’s almost always up and scales again with the fire damage and idols.

Finally, we have the Summon Wraith. Making these permanent is very questionable, but I wanted to stick to the theme. This means you can have only 2 minions. I tried to get +max wraiths, but the twin spirits node so far overwrites everything, so I think there’s no way you can get more than 2. Only 2 wraiths isn’t much of course, but at least they’re permanent. I scale crit in the bottom left of the tree, which works well. I went once again with fire, using Flame Wraith. For what it’s worth, these wraiths are about as powerful as a regular skeleton archer.

Time to look at the passives.

Same thing here, I will just highlight a few interesting decisions. In the base tree you can get a lot of resistances and early on I suggest you take that. Unnatural preservation and Forbidden Knowledge give a lot of freedom in your gear. In the end game, the blessings give you resistances, and you can spec out of these nodes and invest in health. Soul Aegis seems too good to not take, giving minions 300 flat armor at level 100.

In the necromancer tree, I take Risen Army for attack and cast speed. I’m taking unbound necromancy and tyrant’s legion in the passive tree, to balance the number of skeletons. 5/5 Effigies is a great node for this build. It’s a life saver as well, because at low life you have a chance to eat a minion and heal to full, which saved my runs a lot of times already. Because I’m scaling crit and crit multi, you’re taking everything top right.

Take Rite of Undeath, which gives your minions a lot of damage, and you a lot of res. Cling to Life works well for minion tankiness. Note that I’m not taking Veins of Malice, because we’re not casting any skills usually, as this is a very passive build.

I’ve been farming a lot, so my gear is really decent. I chose to get a lot of base crit for the skeletons on my gear, in the helmet and chest. You then use minion crit multipliers to scale the damage, so I have 2 turquoise rings and the unique amulet Death Rattle, giving another 97% minion crit multiplier in my case. It makes your minions take more damage, but I found that it’s not too bad actually. Most other items just have minion stats, intelligence or player health on them. I’m also still using the unique wand Reach of the Grave, which synergizes well with the skeletons.

For idols, make sure you have at least one idol that grants mark for death on minion hit. Even at 4% chance, this is awesome. I run a combination of base crit idols and minion fire damage idols and I have a bit of cooldown recovery.

For blessings, I’m pretty much taking all the resistance blessings, because I don’t want to deal with resistances. There are some really great minion blessings as well, but they’re in the same pool as the crit avoidance one, for example, and I prefer once again to not have to deal with too many defensive restrictions.

I have one end game loot filter that’s pretty strict, but does have everything you need. I will attach it to the forum post, see the link in the description.

Levelling is super easy. Minions do well across the campaign and scale decently into end-game.

Generally, I don’t mind giving enemies a bunch of damage or some health. All the things like chill or slow on hit are fine. Crit is fine too. It might kill your minions, but it won’t kill you, because you’re crit immune. I would not give enemies dodge or resistance, and definitely don’t give them crit immunity, because that ruins our build since we’re crit scaling.

And that brings us to the playstyle of the build.

Here’s the build in action.

It’s a lazy summoner, extremely passive. You only need to resummon every now and then, and dodge some stuff. The lack of a movement ability can get you killed if you are not careful and get cornered, but that rarely happened to me. In boss fights, especially Heorot, we have enough life to survive a few ticks in the blizzards. No movement skill slows down the build of course, but we’re staying within the theme at least.

Apart from this there’s really not that much to the build. It’s fairly straightforward. It’s not as strong as it could be, for sure. And my next project will be turning the permanent minions into temporary ones, add a movement skill, and make a much more active summoner that should do a lot more damage.

Stay in touch for that one.

I had a lot of fun creating this build, all the way from start to finish. I hope you enjoyed the video. If you did, give it a like, toss a sub to the channel, and finally, thanks for watching. See you soon, love you all, bye bye.