You can see in the video after I switch back from bear into Swarmblade form how fast the bosses die. 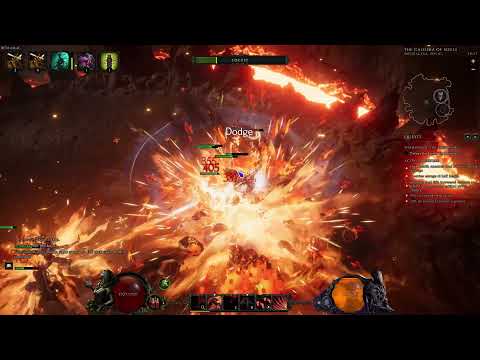 If you like it, I can upload some more videos on doing echoes and showing equip, skills etc. I am still working on it.

Update: Here is a link to the character. There is still a lot of room to optimize equip and skill trees, since I didn’t put too much effort in it so far. So this is not a complete build, guide or something as it is not finished.

I tried out certain stuff during levelling. Even some of my resistances are not capped yet, I am still experimenting. But the idea of the build is: high attack speed with lots of bleeding stacks on the opponents to boost locust swarm. + melee cold damage and cold penetration are very strong for this. So for a weapon, the set weapon works quite well but a goot exalted or even legendary weapoon might be better. In the video I was wearing a exalted weapon - a little bit weaker than the set weapon I a wearing now, but not that much. The freezing is also not needed, I just test it for fun. The summon spriggan is also not needed, I dont know yet what else to put in 5th slot.

I have the Hive on numlock autocast, because I am lazy. When I am approaching a “boss” or something worthy, I beat it, spawning hives in front of him. Hitting my own hives while hitting the boss (and building up bleeding stacks) releases locusts from the hives quite quickly. After that follows Swarm strike and the Locust Swarm gets boosted by insane amounts of % increased damage (unfortunately it only shows “+15” bleeding stacks on an enemy) and it gets boosted by a lot of locusts which give flat damage. If bleeding stacks and locust numbers are both very high, the damage of locust swarm is insane.

When I ramped up a good locust swarm, I like to switch to werebear and rampage around the map towards the quest target. Bear prolongs duration of locust swarm by 4 seconds which is nice. Also, stunning (or freezing) enemies with warcry and switching back to swarmblade form, spawns up to 6 locusts, which can increase the numbers of locusts you catch in your net locust swarm, for further flat melee damage.

Other interesting mods are maybe bleeding duration/ bleeding duration for minions. But usually nothing lives long enough so far besides some bosses.
But now the weekend is coming and I just reached empoered echoes yesterday, so I guess it will change slightly here and there.

Just one quick video of an empowered echo. 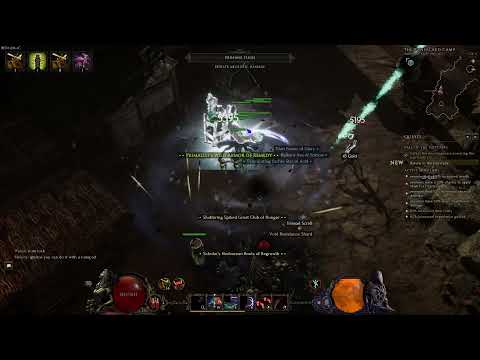 Looks sweet got a link to your builder ?
I was thinking of doing some cold locusts with shapeshifter but with spriggan form and cold vines + healing totems for support (and maybe Yulia’s path for bonkers damage).

I never used that Builder but I can have a look in the evening after work. This build makes use of the bloodlust Swarm Talent in combination with high attack speed and bleeding chance. Locust swarm damage can geht quite crazy.

I updated my initial post with a link to the character. The build is not fished yet (both items and skills are subject to change), have to put some effort in it over the weekend.

I made a short video of The Altar of Flesh (empowered). 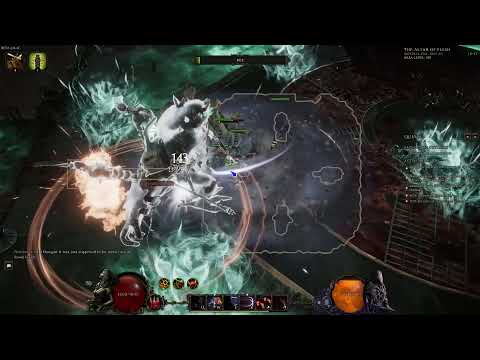 And lastly one at the Training Dummy 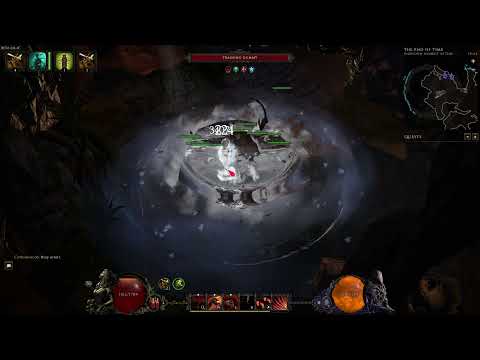 Its so bizaare that this works. I tried looking at your gear but I couldn’t figure out what affixes you were scaling to scale your damage. Would you prioritize minion damage for this? I can’t figure it out where the damage comes from. Its so confusing honestly

There is a lot of room to optimize the equip. I just equipped what I had bunkered in my stashes during leveling and crafted it a little bit on it to close my resistance gaps. More was not needed yet since I am crushing through the content. But I will theorycraft a little bit more now the weekend is there.

Let me explain how I think the build works and how I scale it:

The talent “Bloodlust Swarm” gives us 50% increased damage for Locust Swarm for every bleeding stack consumed on the monsters around us after using Swarm Strike. As far as I understand the tooltip, this damage increase is not capped like the AoE increase of the same talent but it can stack up infinitely. So if there is a group of like 5 mobs with 50 bleeding stacks each and you’re hitting them all with swarm strike, you’ll get 5 x 50 x50 = 12500% increased damage for locust swarm for its duration. At least that is what I am expecting and what I observe during playing and how it feels.

Because we can reach such high % increased damage numbers for locust swarm, we don’t need that much % increased damage on the equip.
So the best stats to scale are flat melee (cold) damage and cold penetration, I would say. We get additional flat cold damage (10) for each locust, that we catch in our Swarm strike. So to optimize the locust swarm damage, it is good to have a lot of locusts arond you plus a lot of bleeding stacks on the mob (even better: on the mobs = more bleeding stacks). This combination can lead to ridiculous damage of the locust swarm. But it is not always easy to achive, since most monsters die too quickly, before you have time to build up bleeding stacks.

For the weapon I use the set weapon because it has around flat +80 melee cold damage. There is also a unique body armor with flat melee cold damage, if I find that one with 3 LP or so that would be nice.

Attack speed and bleeding chance are also very important since they let us apply bleeding stacks faster which in return will provide us with increased damage Since the main attack doesn’t cost mana or rage, it is easy to make it very fast. I also use idols with bleeding chance for minions. If my minions attack one group of monsters that is a wonderful source for a mighty locust swarm.

Cold penetration is another scaling factor, that I suppose works well with this build, so I stacked it as much as I could. Again, the build provides us with lots of % increased damage so I focus on the other mods that scale well with increased damage, which are flat damage and penetation.

To optimize damage, one has to get used to when and where to use Swarm strike. There is quite a difference between the lower and the upper edge of locust swarm damage. But even with a mediocre or bad Swarm strike (only few locusts nd bleeding stacks), the damage is quite nice.

I think for this build, minion scaling will be worse. I am not too much into all game mechanics yet (playing this game only for month or so) but with minion scaling you would’nt profit from cold penetration and flat damage from equip, would you? And these are essential.

The purpose of my minions is mainly to apply bleeding stacks and provide flat damage for the locust swarm (locusts only).

The Locust swarm after engaging the boss is nice. Afterwards I messed it up and damage was quite poor. But it doesn’t really matter, as long as an locust swarm is up, it is hard to die. 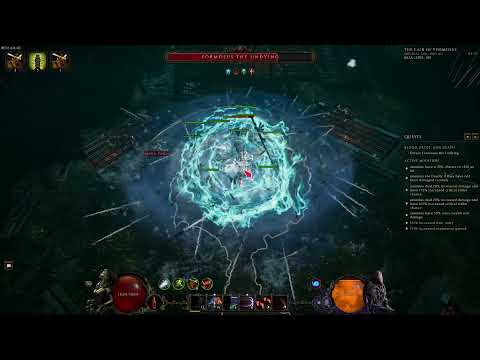 I switched from summon spriggan to Thorn totem. I am using an idol with % chance on hit to summon a thorn totem and it summons a ring of 5. I like it better than the spriggan 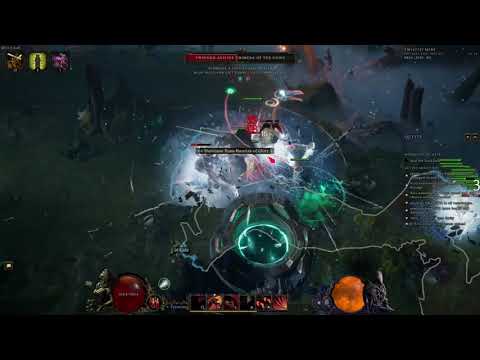 Yesterday I respecced some points. Got more hive/ locusts and thorn totems. The cooldown of hive resets during transformation. So when switching back from bear into swarmblade, all 4 hives are autocast which spawn a huge number of locusts. This considerably boosts flat damage and the locust swarm gets huge. I am playing very greedy in the video and slow (I am an old guy), almost die. But it think it shows how powerful the locust swarm can be. And it doesn’t even show the upper end of the scale. This is just a normal video with careless gameplay, not even some highlight. The swarm can be stacked way higher than seen in the video.
I also put a new link to the character. The freezing is not needed and could be substituted for more damage or other kind of defense. I am just testing it because I like the style. 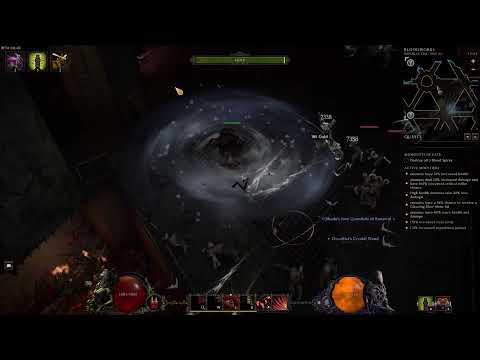 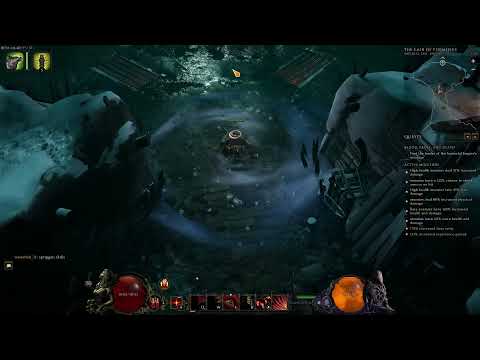 Locust Swarm ticks for >100k on the training dummy. I am wearing Eulogy of Blood at the moment, it has great synergy with the build. That one plus Yrun’s Wisdom would make great Legendaries. 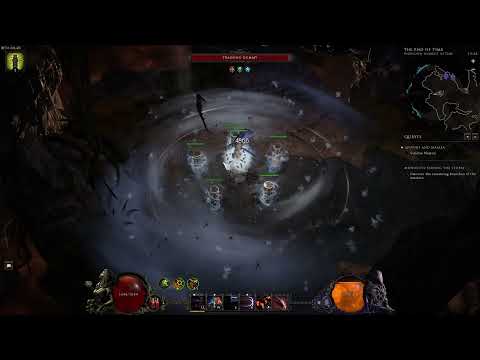 There is a talent point in Swarmblade(viper’s call) that lets serpetstrike apply to your Armblade attack, and not need a spear to use.

I highly recommend this build, or better say this idea. Because this is not a finished build yet, item wise. Since my char has only 1800 hp in werebear form (enough for 176 Corruption Formosa Monoliths though) and there is some stuff that is not needed and will likely be substituted for hp/rsistance items in the future, like the boots for example.
It is fun very to play. An insanely strong AE that still requires you to ramp it up every 10 seconds or so, so it is not boring to play. In between, you’re rampaging around the map as werebear while everything that comes close just dies instantly.