Stunning Judgement - no uniques required (0.8.2i)

This is my new build I am calling Stunning Judgement !
Yeah, I suck at naming builds … anyway …

Premise
With maximum Stun chance, you can lock all mini-bosses and even most bosses down. It has over 1000% increased stun chance!

Game Play
Lunge from pack to pack and use Judgement. Stunning, isn’t it?

Unlike a lot of melee builds, this does not require you to spam your attacks. Since most things near you are stunned after each attack, you just position and slam over and over to clear.

Key Mechanics
The helmet Affix “Gain 9 (or 10) mana when using Smite” is key. Judgement is set up to cast up to 3 Smites on use. Smite costs 3. This nets you 6 mana per Smite, or 18 mana per Judgement. Judgement only costs 29 (thanks to Relic’s -3) leaving 11 mana. We have enough Mana Regen (19) to regenerate that last 11 between Judgements.

On some bosses, when there aren’t enough other monsters around, you get only the 1 Smite. This is why the build packs so much mana regen, and also why we have some passives in Vengeance Mana Gain.

Judgement is setup to maximize Stun chance (+300%, plus 110% from passives) and this activates Knockback. Knockback is actually really good, as it lets you knock bosses around the map. You can move them to edges and pin them, or move them out of ground AoEs. Once you get used to it, its really nice.

Support
Smite is setup for healing, not damage, as we can’t really stack enough Spell Damage to matter. It should be more than enough to keep you up, but we do have a little leech in the gloves and relic.

Holy Aura, Lunge and Vengeance are setup to buff us and Judgement as much as possible. Vengeance grants 100% increased damage when Riposte is pending and we have an extra Riposte. Holy Aura grants +50% (100% on activation) extra damage, and Lunge grants +100% Armor for a bit after use. Since we don’t ever cast Smite, we put Juggernaut Stance on the bar, and I typically only activate it for Arena/Arena monos, or for really static boss fights.

Video
This is just a brief game play video of a monolith run. 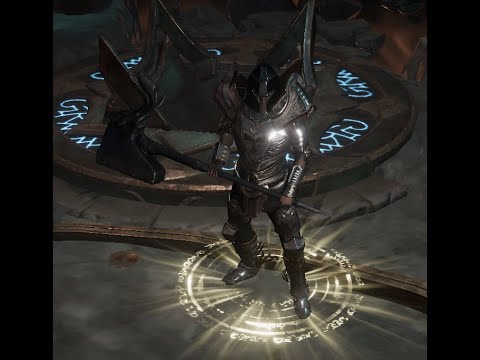 stun build would be interesting

Is it hard to use Boulderfists because you lose leech?

Also, is there enough mana to use Sigil without using Vengeance?

Yes, on the Boulderfist, plus, honestly, its over 1000% stun, so they weren’t really necessary.

Not sure what I’d replace for Sigil, as Lunge, Holy Aura, and Vengeance are really important, although you could not spec into Vengeance I suppose.

Vnesu svou leptu (don’t know how write it in english). Mail Crusher from Sentinel Passive Tree don’t work with 2h weapons. You can use Order of Lagon node in Smite Skill Tree for addititional stun chance from Shock and take points from Soothing Balm and Blinding Flash to Holy Fire. Dodge and health regen from Holy Aura are useless cos you have small value of this stats from other sources, put extra points into Fanaticism and True Strike.