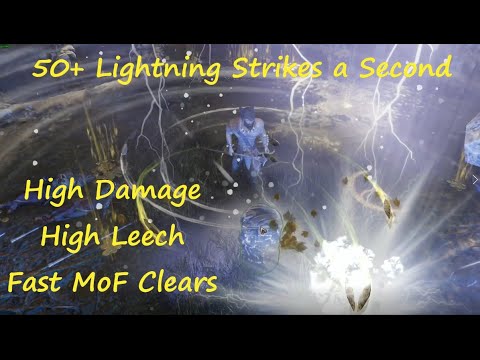 The main prefix you want on idols is totem cast speed. Prefix is increased spell damage while active totem. Other idols that will work is anything that increases lightning damage/survivability/totem dodge/ really anything you want. Just expect DPS to drop if totem cast slower. 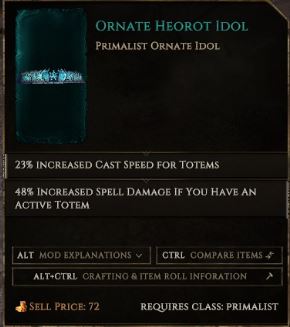 Below is a Tunklab Gearplanner link that has been put together from the gear shown in the build video. This gear is not required to be all T20 or max rolled for the build to work. As your gear gets better your damage will improve

I was having some problems with the Freeze Shaman when suddenly this one popped up in my youtube notices, so I promptly switched over and have been having a blast. Sometimes there are so many lightning blasts I feel like the entire screen is blowing up, which is pretty cool. I also enjoy the mix of melee and spell-casting the build allows. Still have a ways to go to get the skills at max where I imagine the added stuns and bonuses will make it even more fun.

Both this build and the Freeze one share some similarities in that they use Tempest Strike to regain mana and also use storm totem and ice thorn. The Primalist passive tree I believe was identical. So if you are “converting” there’s a bit of overlap.

Anyway, I honestly didn’t get far enough in the Freeze build to evaluate it properly. I was in the 40s and dying a lot, and the offense wasn’t going as well as I’d imagined. After converting over I started seeing some of the same issues, and I realized aside from gear it was likely my laziness that was at fault. Which gets me to the side topic: autocast. This is the first build I’ve played that seems like it actually requires autocast. Once I put maelstrom and thorns on auto it really turned things around. I went from 2-3 stacks of maelstrom to 7-8, and auto thorns made the skill actually useful. The video says to auto storm totem as well but I prefer having control over that and I don’t think that changes anything.

I suspect it’s been discussed before, but I wonder if the autocast of spells is intended or not. I personally don’t mind having it available, but it does seem like if it was really intended, it would be a feature/setting in the game, or even a specific node. I guess I was just a little surprised at how much difference it made. I stopped using it for a while after changing to a new keyboard without a numpad, so it was kind of a surprise that I really needed it for the build to work properly. Just curious if there was a consensus on it.

Autocasting been a hot topic.

Eventually im sure the supreme court will make a ruling but for now its pick you poison.

wanna try your build - looks awsome! Starting from scratch and wondering how to level this build best? Is there a suggestion or start off right away with all skills and passives?
Thx for any hints.

You can level a build right into this just expect it to take sometime to min max
If you find yourself struggling throw a companion or 2 in the build for a little extra support.

Alright, will do so! thx!

Looks entertaining and progression get so slow after level 85 that im looking for something new.

But it looks very flashy … does it run halfway smooth regarding FPS or does the light festival total dump the engine like heavy minion builds?

It ran pretty smooth for me, but so do minion builds usually. Sooooo maybe?! Lol

@TheRealDeal I just leveled this more or less from scratch so here’s some notes on what I did:

Early levels (through 25 and choosing mastery): I basically used thorn totem, wolves, and eventually tempest strike. I did level ice thorns as well but as I mentioned earlier I wasn’t autocasting it so it was kind of useless. With autocast, I suspect the whole thing would have went smoother. I like to level the “final build” skills as soon as I get them, but that’s really a personal choice. Given that, probably good to take Maelstrom and autocast that as well. This allows you to get the feel of the core of the build fairly early. I kept the jump attack for movement for quite a while but eventually you’ll have to give something up.

Now I’ve been playing long enough that I have a lot of the early Uniques, so I often rely on those in early game to save up my Glyphs for later crafting. I don’t think any are necessary but one fun one in particular was Bone Harvester. Since the build uses 2H melee weapon in the long run, I thought I’d get used to it and only use 2H. This one was fun because you get a chance to get some skeletons to help you fight.

Other uniques I messed around with: Mourningfrost and then Stormtide boots, Snowblind helmet, Stormbreaker 2H, Tome of Elements, I’m actually still using Valeroot armor at lvl 60. Valeroot is fun as you get a lot of the little sprite things shooting as well, adding to the special effects.

Once you hit Shaman grab Storm Totem and dump the Thorns. Then keep leveling Shaman til you get Tornado and you have all five core skills. Since tornado has a random component to it, you can just spam it as needed, as long as your mana looks good. Then smack some things with melee when you need mana again. Keep running around and watch the lightning fill your screen.

I did start experiencing some lag yesterday after doing an arena run. I’m not sure if it’s a memory leak kind of situation or what, as I wasn’t doing anything differently otherwise. It basically was like a slideshow by the end so I had to restart the game.

thx for your insights here. In the meantime I did level this already but differently. Its not for new players but what I did is:
–> Take thorn totems and craft on every item possible “minion damage” - I literally “ran” through the hole story till Lagon.
I didnt care about defense because I was just running. After reaching level 45-50 I started gearing up for defense and MoF by setting up the loot filter accordingly.
Very smooth level experience!