Sentinel All Skills do negative damage

I didn’t think much of it the first time this happened, but after it happened again today I wanted to report it. It first happened in a Quest Mono. I was fighting a boss and I noticed I was doing ZERO damage “actually zero damage”. I went over my tool tip for hammers and it showed a negative string of numbers. I also noticed that when the no dps started I had this very large black circle around my character. Changing zones didn’t fix the issue. I restarted. the game client and it worked again. This time it happened in the Arena. I haven’t hopped back in the game yet this time, because I wanted to report it, but i’m sure its fine. 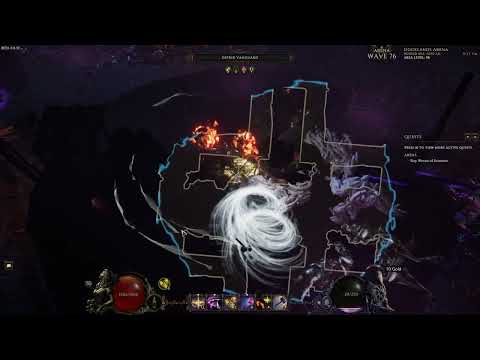 Thanks for taking a look at this!

Edit: forgot YT link. Also, the issue starts at 2:46, but I thought I should include what lead up to it, in case it was relevant to you all.

This is a known issue with Sigils of Hope.

i have a bug on bosses and Arena. After few minuts infight. All went black. The boss and me have unlimited health. i must close the game and can beginn again…

is a known issue with Sigils of Hop

Do you happen to have a link to a post? I’m just curious if there’s any work around, or is it some passive I can unspec to stop this interaction.

Edit: Just to elaborate a little more on why I ask if there was a different thread is that I’ve used Sigils of Hope for the majority of my toons leveling experience. I have about 25 hours into playing with Sigil of Hope prior to the 2 bugs that hit me today and this didn’t happen. This didn’t happen until I repseced into cast on hit smite earlier today. So I just wasn’t sure if there was a passive that I changed that it didn’t like, or something else that changed today.

Edit 2: disregard. I found the magnifying glass while trying to find a search feature for the forms. [Known Bug] No Damage Bug - Hammer Throw Smite (proc) Paladin - SIGIL OF HOPE

Do you happen to have a link to a post?

Yup, that was in my reply.

Unfortunately the devs are having difficulties narrowing it down to a specific cause or causes as it doesn’t happen particularly frequently.

Sadly for me its now starting to happen every time i get into a monolith, makes me not want to play the game lol. restarting right after getting in. im using sigils of hope, holy aura, volatile reversal, shield throw, and judgement. this happened to me in the past around 8 months ago when i was playing alot. it hasnt started happening alot until just the last 2 days of playing when i switched to volatile reversal. its blacking me out at the start of almost every map like 5-20 seconds in.

i really hope the devs can figure it out. is there any way to post my build some where on the forum or upload it to my acct?

is there any way to post my build some where on the forum or upload it to my acct?

Yup, you can use the build planner.

Wanted to note that this bug usually occurs when I’m attacking really fast, at least it seems that way

This topic was automatically closed 3 days after the last reply. New replies are no longer allowed.