We’ve been teasing this announcement for a while, now officially announcing the overhaul of the passive system! This post outlines our design process for the new passive system, and what we learned from the passive grid.

This is the passive grid, it had a lot of things we liked about it, but it also had some major problems. 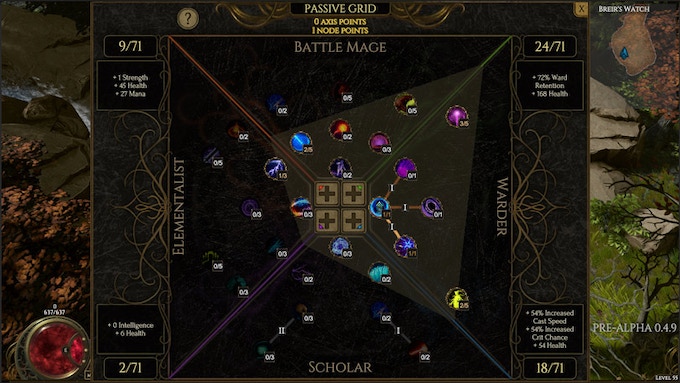 The first problem, and one of the biggest was of communication. Most people could not look at the passive grid and intuitively understand how it worked. Expanding the area nodes could be acquired in by extending the axes was fairly unique, but that also meant people didn’t have a good reference point for how the system worked. With some explanation most players could get the hang of it, but with as important as a passive system is in an ARPG, having one that was unintuitive was not ideal

The next issue was having two kinds of points. The issue with that was twofold, firstly it was confusing which was exacerbated by the way the axes worked, and secondly it increased the amount of thought required to engage with the system effectively. If you have a piece of gear with 46 armor, and you find a piece of gear with 46 armor and 10 health you know that’s an upgrade. With the axes/area system you have to make tradeoffs between different axes based on their own stats as well as what nodes they grant access to, which significantly discourages developing your build as you go. While planning a build should be more optimal, the system shouldn’t punish experimentation.

The last main issue of the passive grid was the mastery system. The passive grid did not have a good way to incorporate specializing your mastery and continuing your progress on the passive grid. We could have empty areas on the grid that got filled in when you chose your mastery, we could have the passive grid expand outwards, or we could have a separate passive tree for your base class and your mastery; None of these were good options. Having empty areas that filled in wouldn’t work because you couldn’t make informed decisions about which axes you expanded if there were nodes you didn’t know about, expanding the tree wouldn’t work for the same reason. Having a separate grid for the mastery would be better, but displaying it well would be hard and it would feel a bit tacked on.

Now that I’ve told you all about the problems of the passive system, let’s talk about the good.

The main thing we knew we had to keep in any passive system was nodes, particularly ones with mechanical effects beyond stats. Nodes are a great way of showing incremental progress and giving discrete understandable choices. Having mechanic-affecting nodes allows for your passives to radically change the feel of your character in more interesting ways than just raw power. (note: in the final version, all three trees will have nodes)
In the new passive system, the branches of the passive tree are the three masteries of each base class. That’s right, three. We are adding five new mastery classes. This system allows us to keep the benefits of the sections of the passive grid, without having two kinds of points and being hard to understand. Progress up the tree is made by putting points into nodes, thus allowing you to reach higher nodes.

The way you choose your mastery is through lock nodes. Lock nodes are nodes part of the way up a skill tree that lock off the rest of the passive tree. Each mastery has a lock node. Once you pick one, you unlock the rest of that mastery and you are locked off from taking the lock node in the other two masteries, and subsequently the further nodes in either of the other masteries. Nodes in any mastery can be taken up to the lock nodes. This gives a lot of flexibility for builds by allowing some mixing and matching between early abilities and passives of a mastery, but still provides the concrete decision of choosing your mastery.

Previously, all skills unlocked based purely on character level. In Mastery 2.0, there are some skills tied to the base class that unlock with level, but the rest are tied to progress in each of the three passive trees. It doesn’t matter the particular nodes you take in a tree, just the total number of points you take in a tree.

Now, onto the new masteries!
Sentinel for the Knight will focus heavily on defense, utilizing armor and block to become an indestructible titan on the battlefield. How do you fight something you can’t damage?
Runemaster for the Mage will employ runes and other unique forms of elemental magic to control the battlefield. While the Sorcerer focuses on raw power, the Runemaster uses his superior technique and tactics to bend the elements to his will.
Shaman for the Primalist will focus on nature, using the power of weather to destroy his enemies with tornadoes and lightning. While the Beastmster charges ahead, the Shaman can destroy his enemies from afar, raining destruction from above.
Lich for the Acolyte will use the magics of blood and death to grow her power and annihilate any resistance. The Necromancer may be the master of the undead, but the Lich is the master of corpses.
Falconer for the Rogue uses a falcon, swooping across the battlefield to gain an advantage. With the falcon at her side, the Rogue will make quick work of her enemies.

This is a lot of absorb! So hard to tell if I am going to like this new system better or not. But I’m looking forward to test it out in alpha and provide feedback on it!

This is great news all around, for me. I strongly disliked the old system, glad to see it go. Exciting to see the new Masteries too, fleshing things out nicely.

I really like these changes, last system was, as you said, difficult to engage with early on and could be difficult to see exactly how many points in each were needed. This new system is very clear and gives real definition to the character i want to play rather then just simple number changes. I can’t wait to try this out in alpha !

Just wanted to thank you for supporting the game as much as you did! @Jerle

Oh… hehe. I really hope this game do well!

I like it. In the old system the points spent to advance the different sections gave stats and power boost is that still the case?

[quote quote=9463]I like it. In the old system the points spent to advance the different sections gave stats and power boost is that still the case?

In this system progression down a section is determined by how many points you’ve put into nodes in that section. So there isn’t a way to expand what’s available without getting bonuses from nodes.

Looks really cool. I didn’t like the old system cause the points that couldn’t go into the nodes just didn’t feel very interesting.

Oh this is delicious

This new passive system looks awesome. Cant wait to try it out.

At a first glance it reminds me a little bit of the skill system from Borderlands. I like that one, because it is quite intuitive and easy to understand. I think it is an improvement over the initial version with the passive grid, which was relatively hard to understand imo.

This is simply fantastic. I liked the old system as it was but the new one is WAAAY more user-friendly, intuitive and easy to learn. In my opinion not a necessary change but a blessed one.

This is literally the old WoW type setup where you always wanted to mainly go into one tree for the last powerful node and then branch off into another tree. I fully support this change. I didn’t mind the old version too much since I understood how to use it but I knew there would be a better way to go about it, but not a complete overhaul. This is even better than I imagined. I’m super excited about this and amazing job! Alpha here I come!

Thanks for all of the supportive feedback, everyone!

To be honest I hadn’t been entirely sure how this change would be received.

Very excited to see this, and it looks like it makes skill unlocking cleaner and more sensible at the same time. Can’t wait to see it in action soon!

cant w8 to test it XD

Actually super happy with this change, the previous grid wasn’t all too great for splitting points up. Mostly using some points just as travel points to unlock a node in a different section. Looking forward to seeing and testing this fully

I don’t actually care for this change to be honest. Your main reasoning seemed to be that people didn’t get it inuitively. Well, i guess that’s a problem if you’re making a mobile game for .99 but this is a ARPG. ARPG fans like depth, look at the success of PoE and D2. Immensely deep games and customizations. I don’t think that is a good reason at all.

Secondly, you had a VERY unique system that I personally thought was very inspiring, and brought something to the table no other game does.

Sadly, it just seems that you’ve adopted what every other game does. In this way you have diminished the style and what sets you apart. It’s decisions like this that make you just another diablo clone, unfortunately.

I would love to see you reconsider the design and implement the axes again with some improvements, rather than just throw out the whole design concept.