I’m new to Last Epoch, really enjoying it so far. I’m running a Shaman Spriggan Form build, and I can’t for the life of me figure out what is scaling Razor Vines. The tool tips don’t seem to match up with numbers and I can’t find concrete answers in a forum.

Does Thick Tendrils work with Razor Vines? I’ve seen builds with only 2/5 in this which seems insane to me.

Thanks for any help!

The vines are minions so only minion affixes/passives will affect them. The minion tags (presumably phys and spell) tell you what minion modifiers affect it (minion phys damage and minion spell damage not minion fire damage or minion melee for example), then you attunement buffs the minion.

Thick tendrils will work on the vines, yes.

So when you hold alt over the spell and it says the scaling tags are “attunement, spell damage, physical damage”, is this just a UI bug? If comparing it to other spells I would assume this should read “attunement” and “spell/physical” under a minion tag, similar to how the regular vines have “physical/poison” under a minion tag. It’s the lack of minion tag I think that’s confusing.

I’m not at my pc at the moment but for minion skills there would be 2 rows of tags, the top line would be your stats that affect it (eg, attunement), the other would be the minion’s tags (physical and spell).

I understand, I think it’s the lack of those separated tags that is causing confusion. When you get a chance, hold “alt” over Razor Vines and I think you’ll see what I mean.

If I remember well, @Cujo did a lot of testing about this. He may be able to tell!

So, what exactly are Vines? Primalist 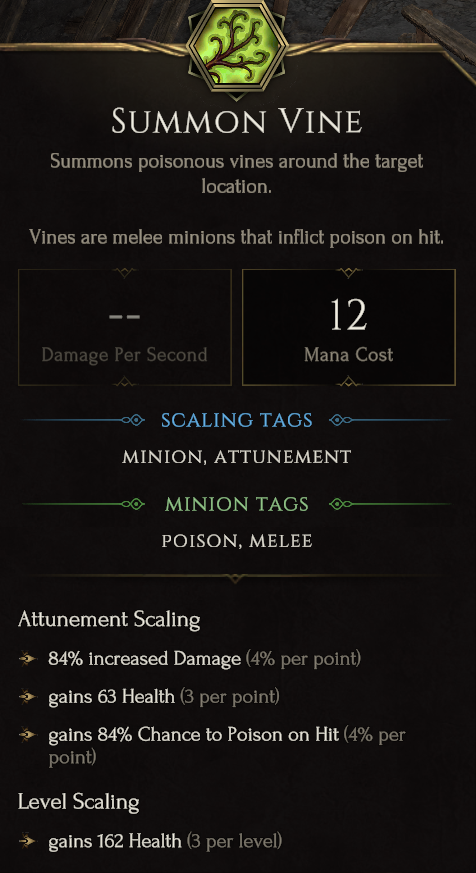 So the first line is what your stats the minions scale with, anything that says “minion” plus your attunement. The second set of tags is the minions tags, so the default vines would scale with minion poison damage & minion melee damage.

When you hold alt you can see the specific numbers. Each point of your attunement gives them 4% increased damage, 3 hp & 4% chance to poison on hit. They also gain 3 hp per character level.

When you put points into the Razor Vines node the summon vines tooltip doesn’t change (@KissingAiur, this is a display bug since the vines become ranged rather than melee) but if you hover over the Razonr Vines node you see the new info: 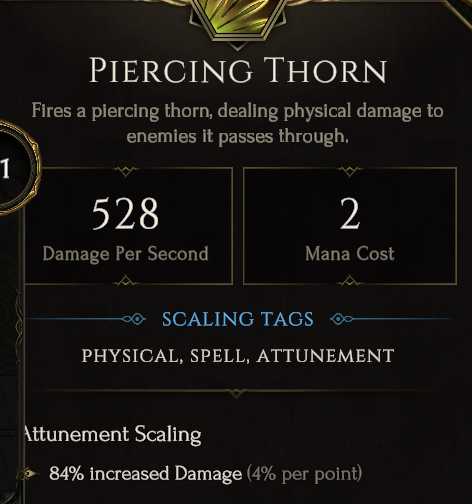 They then gain a new skill, which fires a piercing spell that deals physical damage.

Thanks for your help and for the link to the other thread.

So it sounds like I’m looking for minion dmg/minion spell/minion poison/minion physical for the vines themselves to scale, along with attunement.

If I understand correctly my own personal physical/spell dmg doesn’t affect them.

I’ve been running razor vines lately, focusing almost solely on attunement:
https://www.lastepochtools.com/planner/zowZXkBq
I found that the attunement, and a few minion damage and minion damage over time stats give enough DPS. Using a druid, and some nice defensive items gives more than enough health, mana and defences. So the main thing left, the super thing that makes this build excellent is … cast speed. With 100% increased cast speed, you don’t just double your DPS, you make mono runs go faster, which makes life feel better.