r/LastEpoch - Void Knight 100% Void Damage Warpath is a thing! (thanks to 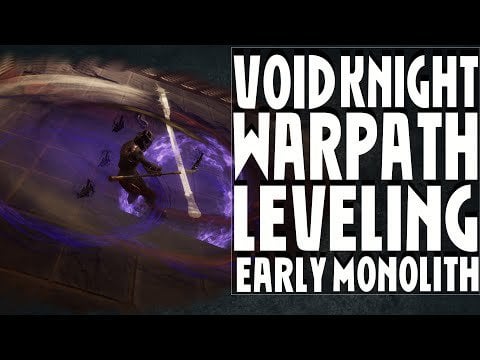 I have a Rive VK and you simply cannot get ‘100% void’ damage because every weapon in the game has significant melee physical, I use a Titan Blade which gives +90 melee phys and even stacking +Void where I can I still have less flat Void

I agree that this VK warpath is going to “peak” too soon in terms of damage. I messed around a little but it just wasnt showing the numbers (I think) needed in 100+ mof.

I actually made the char last, got to lvl 43 or something

IMO, you’d probably get more damage if you dropped some points in Unchained (cost reduction) & put them into Draining Assault (another more modifier) & use Volatile Reversal more frequently to regen your mana.

This will be easier to manage with tooltip DPS

I don’t think it’s quite as bad as you think, the added melee phys damage is “only” missing out on the +% void damage & the void penetration from Abyssal Echoes. In the video (at ~17:10) you can see he has ~335% void damage & +120% phys damage, so missing out on that 335% isn’t a small thing, but the phys damage does still benefit from the %melee damage on echo, and all the more modifiers on the skill tree are generic more, not more void.

And on that note, I’m not sure if his build would get more dps out of a melee crit prefix compared to an attack speed prefix, given he’s getting a relatively high crit multi due to being a VK.

This will be easier to manage with tooltip DPS

It’s not tripled though, it’s x2 (since 100% added damage effectiveness is a x1 multiplier).

The +150% idol (Chronophage) is echo damage, so it wouldn’t be useful for this build, but for most VK builds that may be a good way to go, even without the chest/helm affixes it’s +600%, at 40% chance, the 900% is an average damage increase of 360% (just the idols gives 240% on average). Or you can go for the Vindictive/Spiteful (increased Melee or Void damage for 4s on echo) for 380% increased melee/void damage which is up all the time (& comparable to the Chronophage idols + T5 chest & helm affixes).