So originally, I was going to make this a very long drawn out post, but instead i’d like to just highlight the major thinks I have find boring about this class that ive spent 90% of my time playing. 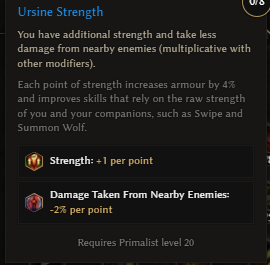 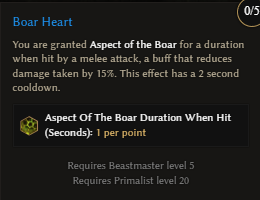 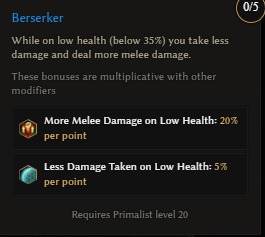 All primalist builds get these nodes no matter what. boring. Each mastery should have a distinct defensive theme, or options, and while the recent druid rework helps alleviate that at the top end of its mastery tree., it still doesn’t fix the main defensive issues of the 0 to 25 point mark in beastmaster.

Since we are waiting on the reworks of the other masteries, I wont talk much about them as is, but a few glaring points to highlight, that stick out for me.

*why is beastmasters only distinctive defensive buffs, a 10 point investment node of 100% increased dodge rating, with an unreliable way to auto proc haste, verses just taking maelstrom, and a 80 flat endurance threshold increase, that comes with only 8 vit?

I could go on, but I’ll just leave these examples as to why I think beast master sucks now, every time I want to play it it just seems more boring outside a couple very specific companion builds, that is going to give me less defense, or resistance options, then simply playing one of the other two masteries.

Ursine strength is a must have, it should honestly go in the base primalist.

To me, sentinel and primalist are the “melee” classes, that are meant to be chunkier then the other classes. They both have passives like that, and they both need them.

I really like berserker tbh, its just a fun node that opens up interesting mechanical options. remove the defensive stuff and double down on damage. Now low life primalist builds are distinctly about BIG melee damage.

Aspect of hte boar is boring, but its really strong, id say make it beast master exclusive or something.