Hello, this is Dr3ad from Epoch Builds. In this forum topic we will go over Projectile Abomination, strongest minion build as of the moment to push high corruption while also having an AFK playstyle. I spent the last week working on this, watched 2 entire 24 episode Animes (Parasyte the Maxim and Seraph Of The End if you were wondering), and pushed it all the way to 412 corruption from 260. It was an absolute breeze the entire way.

So where do I even begin with this? Maybe the past? So Abomination is ALSO a skill with a troubled past. When it was released a few patch cycles ago, it was a big failure. It took a few months to find the best version, which was a Soul Cleave Variant, abusing old wraith on minion kill nodes and bone curse’s bone prisons to get our abom to smack hard and clear the screen in a single swipe. That version is completely dead now, as a lot of the tools that made it good are gone. But with this patch it brings in new tools for us, as the main skills for necro got a slight rework.

The first of these is abomination itself. Its entire tree changed, and added one of the best nodes in it. It allows us to turn of Abomination’s innate decay as long as you do not control 5 or more skeletons, while also making him only being able to consume skeletal mages and summon skeletons. It does not currently suck up vanguards, im not sure if thats intended but the wording on the node itself checks out, so its technically not bugged. This allows us to summon our Abomination and don’t have to worry about resummoning it as often.

The other half of the reworked nodes, inside dread shade, it lost a bit of its damage, but now there is a node that turns off the Decay from it, while making our minion take increased damage = to the increased decay rate on the tree, which currently is 100% increased. Its definitely a fair trade off as Abomination has so much health most mobs don’t even put a dent on his hp bar. This + ignoring the 60% abomination damage node behind the infinite poison node (which still works even if you turn off decay, which sucks but whatever), meaning our Abomination can be summoned and is almost immortal.

The last part is the nodes that allow Abomination spam projectile attacks. We get those from sacrificing Skeletal Mages. Just a note here, it does not care if its a pyromancer, cryomancer or skeletal mage, it apparenlty just cares about the skill itself, as I thought that was not the case up until recently where I tested it. We get 5 extra projectiles, bringning us to 10 in total.
Normally this isn’t good enough due to being on a 6 second cooldown, but Necromancer has access to insane minion cooldown recovery speed idols, bringing it all the way down to like 2.5 seconds, which is good enough to clear trash. One note here is at base, abomination gets 50% more damage, and 70% more melee damage, so no matter how hard you spam the spell damage for the projectiles, they will never deal as much damage as punches due, which we still rely on for single target, which is fine.

Sadly I cannot recommend leveling this build fresh, as Abomination is at the top of the skill tree, but there are plenty of other minion builds here if you want to play this build eventually when you have a leveled necro!

Build Planner + Loot Filter in the description of this video : 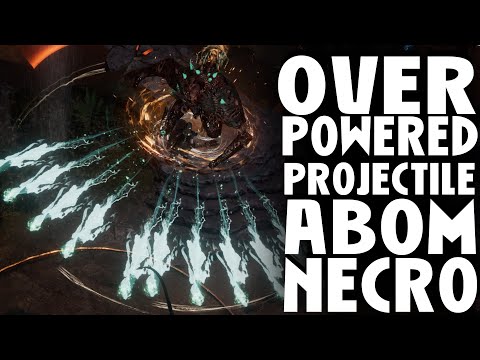 Nice to see all these Abomination builds pop up! Between the Poison Maggots and this build, you’ve been on fire for these pet builds.

Not to rain on cracking the code, but with how well Abomination performs, I wouldn’t be surprised to see the “damage per every minion consumed” buffs get nerfed, as it makes the Abomination very one-dimensional. I was also disappointed to see the projectile attacks do less damage than the standard melee attacks, since you are sacrificing utility, attack speed, and your idol slots just to be able to use the mage projectiles.

This may just be my personal selfish wishlist, but I would like to see the damage shift away from the basic melee attacks and go more for the abilities gained by sucking up certain types of minions. That would certainly make it more interesting than simply taking the 13 points or so for stacking up the damage and only having 7-10 points for unique flavor.

Don’t mind me rambling, but I’m sure this skill will receive tweaks based on these build performances, and I want to see this skill as a nice viable skill for Necro minion builds.

Well all the other abilities are cool and do damage but turning off the decay is the most important thing. I’d rather use soul reave any day but I built within the confines of the skeleton node. I would rather see that changed.